Another Tough Day For Andy Reid And His Agent 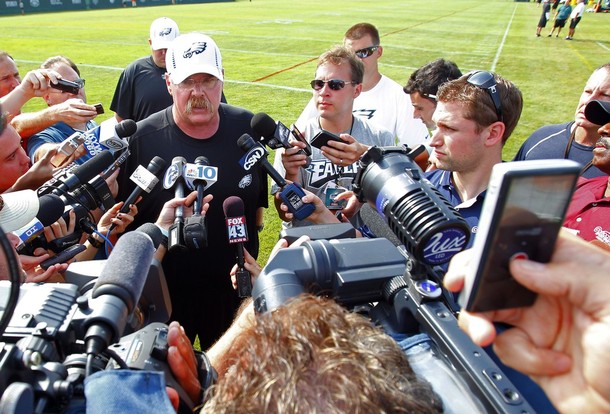 Andy Reid went through a time recently with the death of his eldest son Garrett, but yesterday was a tough time for him as well.  He was getting pummeled all over the media scene here in Philadelphia and being accused of using the timing of his son’s death to benefit him in getting a contract extension.

Most of the media members on the scene don’t feel LaMonte would have been at the Eagles practices this weekend without the okay of his client.  So Reid was getting blasted every where about LaMonte’s presence at practice and his attitude.

The thinking by many here in the local media was that Reid and his agent were trying to take advantage of the tremendous showing of affection by Eagles fans for him after his son passed nearly two weeks ago.

On both sports radio stations, 94WIP and 97.5The Fanatic, each host was calling out Reid for his agent showing up to training camp and saying he deserves the right to stay here as along as he wants.

Jeff Mclane of Philly.com was one of the reporters whom LaMonte approached at training camp and he made the following statement in his article about Reid and LaMonte: “Sports agents work for their clients. It’s not the other way around”.

Reuben Frank of CSNPhilly.com found a source close to Reid who says Andy wasn’t happy with his agent and what he said to the media.  He pointed out that Reid is distancing himself from his agent’s statements.

Nick Fierro of the Allentown Morning Call questioned LaMonte’s business savvy to show up talking about a new contract a few days after Reid was showed with love and support after his son had passed.

Mike Florio of NBCSports.com isn’t buying what an unknown source is reportedly saying.  He called out Reid and pointed out that if his agent says something on the record and he disagrees with it then he should say that.

“As long as [Lurie is] the owner of the Philadelphia Eagles, Andy will be his coach,” LaMonte said.

“This man has earned the right to decide what he wants to do,” LaMonte said. “And he may well decide he doesn’t want to coach

[beyond 2013] and Jeffrey may decide he doesn’t want to hire him, but I can just tell you Jeffrey Lurie has told me on any occasion I’ve ever been with him, as long as he’s the owner of the Philadelphia Eagles, Andy will be his coach. Now, if you know something else, tell me, because I should probably know.”

How could Reid’s agent have the nerve to feel that his client has earned the right to decide how long he wants to be coach of the Birds.

Nate Allen And Nmandi Asomugha Collide In The Air

Sports Agents are right up there with Lawyers,Politicians,Fox News Talk Show Hosts and the Kardashians as far as people that need to be tuned out and not taken seriously for what they say…. Eagles Staff (outside of Todd Bowles) are all working under their final contract year in 2012 and Coach AR contract ends after 2013.. I don’t know any HC that llikes to go into a Season with contract status’s of his staff and himself all up in the air.. so when is his Agent supposed to talk to Luri about their futures..

his agent sounds like a total prick. it appears he was trying to leverage the sympathy towards reid and turn it into contract negotiations

I hope I’m wrong but most of Andy’s future depends on Michael Vick and I just don’t think Mike’s future is all that bright. If the Eagles can’t take it to the next level by the end of the 2013 season it’s probably time for him to go. If I were the Eagles I would not negotiate a new contract for Andy.

I have not been a fan of Andy Reid for some time, but with the death of his son, I decided it was in poor taste to critisize or make fun of him.

His agent should have enough tack to realize, now is not the time to play hardball with the Eagles.

Contracts are like dating. If they really want you, won’t have to ask.

Perform and you get an extension.

Andy’s winning record will land him another NFL job if he wants.

Talking contract at this time shows no class at all on the part of his agent.

And I though Ari Gold(emmanuel) was pitiful.

what a scumbag. he looks like the same guy who sold me my last used car….