Fantasy Football: McCoy Will Miss Jason Peters As Much As Vick Will 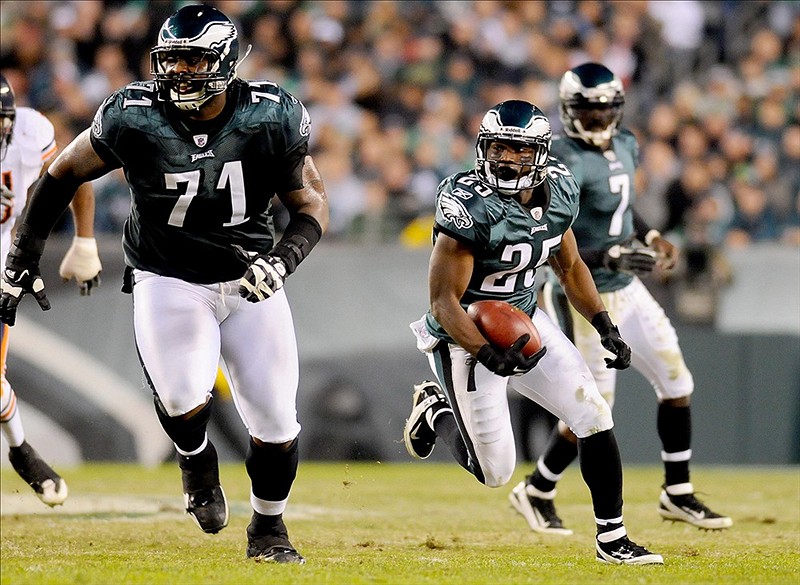 I know Eagles running back LeSean McCoy was a tremendous asset a year ago, if you had him on your Fantasy Football team, but I don’t think he’s going to be nearly as beneficial this time around and I don’t think it has anything to do with his ability.

McCoy is a tremendous ball carrier who only needs the smallest of areas to make a tackler miss, but he won’t have the same people blocking for him this time around.  Andy Reid has made it clear that the Eagles aren’t going to put the ball in his hands nearly as much as a ball carrier, so that will reduce his carries, yardage and touchdowns.

First of all he won’t be able to run behind All-Pro left tackle Jason Peters this year.  Peters is sidelined with a torn-Achilles tendon and won’t play at all this season, so either Demetress Bell or King Dunlap will be blocking for McCoy in place of Peters. Everybody has talked about how that will affect Michael Vick, but it’s going to affect McCoy as well.

The duo of McCoy and Peters had become a dominating tag-team a year ago and the Eagles had started running behind Peters on the goalline and in short yardage situations regardless of how many guys the defense stacked up over him.  He was there best blocker and they took advantage of it.

On short-yardage they started making right offensive tackle Todd Herremans a tight end and lining him up next to Peters.  They would have the two tackles double-team a defensive lineman and open a huge hole in the defense.  Other times they would have Herremans block down and Peters would pull around and lead McCoy downfield.

They did the same thing on the goalline with Peters leading McCoy or he and Herremans double-teaming a defensive lineman.

Peters is one of the fastest offensive linemen in the NFL and it was a beautiful thing to watch him as he operated out in the open field against defensive backs when the Eagles ran screens or quick pitches to McCoy..  He would get out in front of number 25 and they would steamroll linebackers and defensive backs who would try to get in the way.

A number of times they got out so fast on screens and quick pitches that the defense had no idea what they were doing until they were in the end zone.  You’re not going to see that this year because of Peters’ injury.

The Birds have also been working McCoy outside at wide receiver positions throughout training camp and are planning to get the ball to him more as a receiver.  They’ve had him working against Nate Allen and Kurt Coleman in a variety of routes.  Do you remember the way the Birds used to move Brian Westbrook outside and get him matched up against  a safety or linebacker?

I think this will benefit McCoy and the Eagles offense but  because of the Peters injury as well as Reid’s decision to give him the ball less, I don’t see him scoring as many touchdowns.  I don’t think he’s going to be carrying the ball as much on the goalline and he won’t be as effective without Peters.

The loss of Peters and the attempt to replace him with a Buffalo Bills reject is the second most important story of the offseason, after Vick’s ineptitude.

In fact, Bell’s story is very much like Vick’s. He came on (out of nowhere after 2 very forgetful seasons) for a couple of games last year and looked like a potential superstar (though he isn’t)…..guess that’s twice now the Birds mgmt have been seduced by a statistical 5 game blip……..

We have major weaknesses at the two most important positions on the team.

And this is why we should sign Plax. Were gonna struggle in the red zone and having a healthy Celek and Plaxico work the red zone would help out in a big way.

very unlikely that McCoy ever duplicates his performance of last year which was outstanding.. Defenses will approach the Eagles a bit different this years.
Defenses will have their DE’s out a little wider and not be so preoccupied of rushing QB Vick but more of maintaing their lane balance which will remove many of of the cut-back lanes in which McCoy had most of his big runs..
Teams will also keep their LB back a tad to cover the middle zones for the short crossing passes, the TE’s and again cut back on over-pursuiing which leaves big cut-back holes and plays for McCoy.. Teams will probably play more one on one outside coverages and dare the Eagles and QB Vick and their smallish WR’s to make plays down the field and epsecially with issues at the LT Position.. I expect McColy to get about 1050-1100 Yards with another 40 Receptions for aother 350 YArds are so which is still very productive, but him getting 1500 YArd rushing with 20 TD’s is not going to happen again for most opponents Defenses #1 Goal when playing the Eagles will be to stop McCoy first, then worry about Vick where last years most teams did not account much for McCoy and were mostly game planning to stop Vick

its so easy to predict “bad” things for your own football team… if they suck then you are right, if they dont suck then your team does well. It’s a win/win

mccoy is a top 3 RB in the league, every sunday… way to go out on a limb and predict a running back is not going to get 20 touchdowns, bold… very bold.

I think McCoy becomes more of an Average Back this Year since Teams Defenses will key on him..It’s not a Win-Win for anyone, I will continue to tell it like it is and how I see things unfolding for this 2012 Team.. Eagles better have made some adjustments in their Offensive Attack with Teams focusing on stopping McCOy as their Primary Goal and with no LT Peters, more pressure and production is going to be on QB Vick, can he handle it.. time will tell but I surely would put any of my own $$$ on him coming thru.. ..