Unlike Kolb And Kafka, Nick Foles Is A Legitimate Prospect 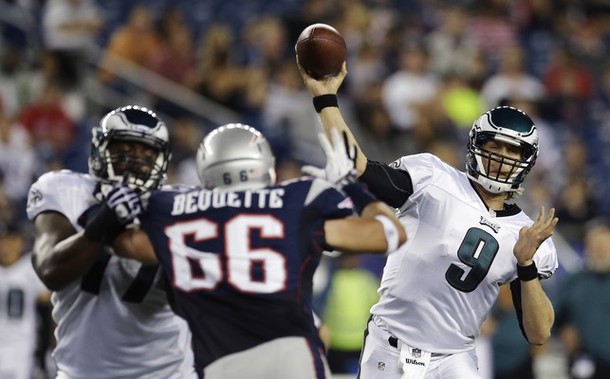 The last Eagles quarterback we saw break in with the Birds who was billed as a future starter was Kevin Kolb.  Mike Kafka could never be taken seriously as a starter in this (horizontal) deep throwing pass offense with his weak arm.  Remember that Andy Reid believes in going for the jugular and he isn’t willing to forfeit weapons, which is one of the reasons Nick Foles is on the roster.

As for Kolb, I was never convinced he could be the guy because he was never willing to stand in the pocket and take the pounding needed to be a pocket quarterback.  He wasn’t fast enough to run away from the defensive linemen in the league like Michael Vick and Donovan McNabb, so he had to play the game from the pocket.

Foles is willing to play the game from the pocket.  He showed me that last night.  The shot delivered by rookie defensive end Jake Bequette was a knockout blow.  Kolb would have had to come out of the game after that hit.

Too many NFL writers and commentators are unaware of the fact that an NFL quarterback has to be physically tough as nails.  Did you hear Jon Gruden stressing Foles’ toughness?  Any NFL quarterback who is willing to stand in the pocket, deliver the ball and take the hits, is a tough son-of-gun.  NFL defensive linemen average about 280 pounds and they put the hammer on quarterbacks.

I like Foles much better than I did Kolb because he knows how to stand in the pocket with pressure in his face and deliver the football.  Unlike Kolb, the youngster knows he’s not fast enough to run away from the defensive linemen in the league so he stands in there and delivers the football.

Reid and offensive coordinator Marty Mornhinweg are starting to get very comfortable with Foles because they were calling a great variety of plays.  They’re confident about his grasp of a good portion of the playbook.

Last night Foles passed another test, and made another major argument with his play for being the Eagles number one backup quarterback.  The dude plays with a cool and calm demeanor which doesn’t fit his inexperience.

In the New England game, Foles continued showing us all the prerequisites for being a star quarterback in the NFL.  He displayed his strong accurate arm, coolness under pressure, toughness in the pocket and the acuity to quickly decipher the coverages.

He was 18 for 28 for a 64.3 completion percentage for  217 yards and two touchdowns with an interception.  The pick was an underthow on a corner route to Jeremy Maclin.  He should have thrown the ball deep into the corner of the end zone, so that Maclin and nobody else had a shot at it.