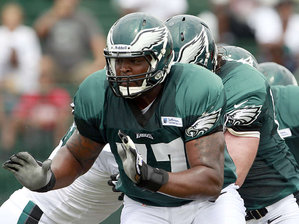 Eagles offensive tackle Demetress Bell didn’t get better on Friday night’s game against the Cleveland Browns, if anything he got worse.  The big fella was beaten time and time again with both inside moves and outside moves by defensive linemen during the Eagles battle with the Browns.

His competition at the position, King Dunlap, didn’t play as long as Bell did the other night.  He was beaten a time or two but it wasn’t as many times as the former Buffalo Bill did.

Bell is playing very slow and unaggressive.  You can’t succeed in the NFL, if you’re not confident and sure about what you’re doing. Bell doesn’t seem to be comfortable with the aggressive, attack first pass blocking technique that offensive line coach Howard Mudd is teaching.  Cleveland pass rushers were going by the big offensive tackle all night long.

Until there’s some major change, Dunlap is going to be the Eagles starting left tackle.

On one play, Bell was slow getting off the ball and unable to cut off a Cleveland linemen, who was lined up inside of him over left guard, Evan Mathis.  At the snap of the ball, Mathis did a drop step with his right leg and took off on a pull to the right in front of running back LeSean McCoy.

Mudd didn’t participate in the OTA’s this year and it’s probably had a negative affect on Bell.  He wasn’t taught this technique by Mudd, until training camp. and he hasn’t been able to adapt to it as of yet. I don’t think this is the number one reason for Bell’s problems but it surely hasn’t helped.

This is a big concern…..Dunlap is ok as a back-up, but not starter material. Moving Herremans/Watkins over is a last resort for it will only break up whatever continuity has developed. Maybe someone from a strong O-line team will get cut soon? I can’t see going into the season with this weakness looming………..

It’s the least of my concerns. It’s not Vick’s blind side, and Dunlap has improved a lot. I’d rather have Peters of course, but that’s not an option.

It should be your concern, blind side or not. We don’t need a turnstile on this line, then having to have a tight end used up to help block.

They had Eugene Chung teaching Mudd’s philosophy during OTAs, so of course he was exposed to it. This is Bell’s first year doing this, it will take time. The other lineman have talked about how it’s night and day when comparing last year to this year since they know more about the philosophy of playing this way.

If it comes to Bell, it will be later rather than sooner. I hope King lasts until then without getting hurt or we’ll be in trouble. I agree with Crazy, we will need to make a move at some point.

This is the second biggest area of coner after the starting QB. These are the 2 most important positions on the field and we have issues at both of them.

Bell was just like Vick….for his frst 2 years a washout….really bad, and then he had about 6 nice games to start 2011 before being hurt.

Looks like the Birds hoped he would `regàin` the abilities he showed for those few games, but it looks like they instead got the player he was his first 2 years.

As for Dunlop….he`s servicable. Look for the Birds to use free agency or their 1st pick next year on a new LT to protect Foles backside for the next decade.

I was not that high on th Bell signing to begin with and stated so many times back when they panicked and obtained him once Peters was injured..
When a Team like th Buffalo BIlls who have major issues at the OT position, don’t even offer him a contract to remain the BIlls, That I am not sold that depsite his athleticism for a big man, that he has what it takes to be a Starting OL in the NFL.. I just haven;t seen it all from him..
The Reality is that OT are very hard to come by.. (maybe the Eagles should have kept Winston Justice who looks pretty good with the Colts now that his knee has healed up) but I think what the Eagles must do movnig forward is have Dunlap play but get some Reps from former College OT and Current RG Danny Watkins.. The Eagles have depth got OG in Mike Gibson,Vandervelde
Herremans is flexible to play LT or RT and Watking played 2 Years at Baylor at LT so he has game experience playing on the outside..
There are a ton of teams in worse need of OT than the Eagles and they are very few and far between so the Eagles are going to have to develp a Brian Kelly, DJ Jones quickley for D Bell I don’t beleive should even make the final Roster he’s looks that bad and overmatched so far…As leadt Dunlap will battle and compete on every snap..

the truth of the matter p-man is the O-LINE IS SUSPECT, Brian Baldinger broke down the game tape and reported that the guards Watkins & Mathis have performed poorly. lets first look at Mathis, he is what he is.. A JOURNEYMAN. who last yr put together a few good games ( against poor teams & after they were out of it of course ) who whiffed on his block when vick got hurt ( he claims he didn’t hear the line call by Kelce.watkins is a work in progress. not the report you wanna hear when a team is suppose to be in contention

Hey this may sound crazy but let’s go with the rookie Dennis Kelly and let him play. Let’s see what he can do and put Dunlap back at his back up spot.

Does Bell even make the team??….Look for a trade.

I don’t think Bell is even Tradeable at this point, not at his Contract Salary..If Teams are desperate, maybe they show an interest but not at $5 Million per Season.. I think Eagles just release him to be honest.. They will have Draft Pick Kelly and DJ Jones as the 3rd/4th OT’s behind Herreman/Dunlap..
On a side note, anyone notice how RT Austin Howard (Former Eagle who I thought had some nice potential) and is now the Starter for NY JEts played last evening.. HE did a pretty good job blocking the Panthers Best Pass-Rusher (Charles Johnson) all 1st Half
Eagles gave awy Winston Justice, and no let a potential player in Howard walk and replaced them with inferior players..

the first 10 games of the 2010 season you hardly heard winston justice name which is great as the starting RT then he got hurt ( someone rolled up the back of his knee ) he came back before he was healthy. and wasn’t the same, he also got a brunt of the blame and was benched during the WC playoff vs GB. he is a very serviceable tackle in this league

The left side of the line is more than suspect.

The probs at LT are going to plague the Birds all year I think, and I was very very wary of the Mathis contract. Always wary of the “out of nowhere great season in a contract year” players.

I, obviously never bought into the ‘contention’ hype…not with you know who at the helm, but especially after losing Peters. These aren’t guys you can just replace.

Looks like the Eagles’ may now have a QB of the future, so look for them to go LT first pick in the draft next year.

On the positive note…I think the right side of the line (from centre to RT) is going to be $$ for a few years to come. 2 promising young guys who will continue to improve and the solid (and still relatively young) Heremans who is still on the good side of 30.

Herremans has played a lot of games and had some foot/ankle issues and probably has about 2 Top Seasons left before he starts breaking down.. Eagles will get Jason Peters back next year but need to use a high-Draft Pick next Draft to start grooming for the Future..