With Jackson And Maclin Ailing, Eagles May Be Forced To Feature McCoy 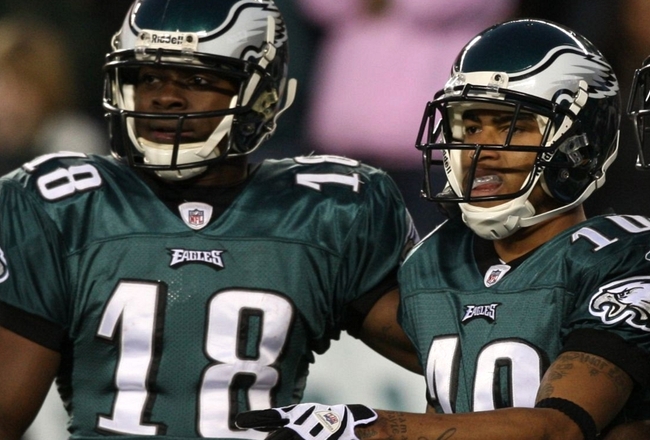 Michael Vick and the Eagles might have to go to battle this Sunday against the Baltimore Ravens without their two top receivers. Jeremy Maclin suffered a hip pointer last Sunday versus the Browns and now we learn that DeSean Jackson hurt his hamstring yesterday.

Andy Reid is confident that these guys will find a way to get on the field and play on Sunday, but neither could practice on Thursday.  Both of them were standing on the side and watching while the rest of the team got in their workout.  Riley Cooper, who dressed on Wednesday and did some of the drills, didn’t participate in practice on Thursday and isn’t likely to play on Sunday.

“I think we’re going to be OK,” Reid said. “They’re getting better, so I think we’ll be alright. I’m not too worried about it right now.”

As for whether Jackson and Maclin will be able to play on Sunday, “That’s what we’re hoping, yeah. We’ll know more [Friday].”

Who knows it might force Reid to put the ball on the ground and give LeSean McCoy and his young backups, Bryce Brown and Chris Polk the chance to carry the offense.  Unfortunately, the Ravens could be very difficult to run the football against with Ray Lewis and Haloti Ngata lining up in their defensive front seven.

Still, I feel they need to feature McCoy.  As long as they go into the game with a plan to spread the Ravens defensive front out by giving them a pass look, they can have success running the ball against Baltimore.

At times I don’t know if Reid and his staff realize how good McCoy is.  I must admit that at times I don’t give him the credit he deserves because he does such a great job of setting up blocks and making people miss in tiny areas.  He seems to create his own blocking.

Amazingly I think McCoy is getting better.  Despite all of the weapons they have, McCoy is their best and most consistent offensive player.  Rather than feature their passing game, which is very explosive, they should feature McCoy first to open things up for their passing game.

It will make Michael Vick’s job easier and allow them to ask less out of him.  If he’s throwing more play action passes, it will reduce the pass rush pressure on him and limit the coverages he’s going to see.  That will give him the chance to regain his confidence.

Again, McCoy should be the featured player in this game plan.  I would also like to see the Eagles get the ball to McCoy out in open space by moving out of the backfield.

Andy Reid Made The Right Call In Closing Practice

That will be the NEXT excuse, why Vick played like $#!T! With, or without them, they ain’t beating the Ravens, unless they stop the hurry up offense, & Vick doesn’t turn the ball over. I have ZERO confidence, that Castillo & Vick will accomplish that.

Yes, with them 2 out common sense dicates that we will run. HHAHAHAHAHAHA. Andy will throw even more thinking that fool everyone. Come guys. 14 years of this.

What I cant figure out…Why the Eagles are favored by 2.5 pts? Yea I know, the home team always gets 3 for being home. Vegas knows something that we dont!

It’s to get all the suckers to bet the Birds, because they are home. It ain’t that hard to understand. It’ll be even by gametime though, if DJax &/or Maclin don’t play.

Ravens 30- Eagles 13
Ugly game that’s over by mid 3rd Period when Ravens move out to a 30-6 Lead and then Ravens Coach Harbaugh puts the breaks on out of respect for AR and tells everyone Post-Game Pres Conference “What a great Guy, Mentor & Coach AR is and how lucky Eagle Fans are to have such a Great Leader in Coach Reid to run the Franchise”…

I put $10 that they above occurs.. anyone want to take me up on this

The Eagles are traditionally a very “public” team. They get hyped nationally. Thie QB gets an inordinate amount of praise despite being very mediocre. The word Super Bowl was branded about all pre-season despite loss of Peters, Vick at Qb, and questions on D.

Media love the Birds and the betting public loves the Birds (usually). I can guarantee you this…Vegas loves the Birds. (two huge Vegas paydays being the last 2 opening games vs STl and Clev that were big $$ makers for Vegas.

Its the only reason Birds are favoured this week….that being said, the line is trending down quickly…..I think it will be -1 or a P by Sunday which is an incredible move……I think that performance last week might have taken a bit of the shine off.

This is a must read:
http://www.footballoutsiders.com/film-room/2012/film-room-ravens-eagles$$

For those of you always complainging that Reid doesn’t play to Vick’s strengths…..

“To be clear, if Vick were a better presnap reader and anticipation passer, he may have found more ways to overcome these circumstances. But that’s not Vick’s game. It never has been. Andy Reid and Marty Mornhinweg know this, that’s why they don’t call more quick-timing plays for Vick. They play to his strengths by stretching the field and allowing him to hold the ball. This tacitly encourages sandlot plays. But by using these tactics almost exclusively and making dumpoff patterns somewhat of an afterthought, Vick’s strengths can become weaknesses. We saw that Sunday.”

I’ll take you up on that, Paulman

My predictions for Sunday…since we heard the negative view, lets get to the positive.

1) I believe the Eagles defense will have their way with the Ravens and get after Flacco, making him look very shaky…Our corners will dominate the Ravens WR’s.
2) That huddle up offense we will see because the Eagles will be up by 2 scores late in the game
3) The Eagles will appear to have a more balanced attack, but the reason will be due to less penalties, which means the runs that McCoy gets will go in the books and not be taking out.
4) Vick will be a better decision maker with the football and will limit his TO’s.
5) The Eagles will utilize the TE more against the blitz and see more success with the screen.
This will be a good game, in which the Eagles come out on top!

I can’t wait to hear the excuses of why Vick played well….

I like it Realtalk.. I am assuming thats what Vegas thinks also. Betting the Ravens this week would be way too easy. If you watched the 2 teams last week in their respective games, how could you bet Philadelphia? They are begging us to take the Ravens and they clean house! It dosen’t always work out that way, but c’mon, even a PICK ’em would seem like an outlandish line!

Frank – Vegas doesn’t make lines based on what they think the Eagles’ will do, or what their strategy will be.

They make the lines based upon where they want the $$ to go.

The Line is moving down because when it came out at -3 the sharps pounded the Ravens – hard.

If you see the lines, usually one game a week, has a line that leaves you scratching your head. Thsi week it’s the eagles..

Tons on $$ came in on the Ravens at that price…..too much….so they’ve moved is an almost unprecidented 2 pts down to -1….I think it’ll be a pick’um game by SUnday.

Right now the books are begging someone to take the Birds….and aren’t getting any takers.

I see what your saying Vinnie..

My thing is why would the line even open at 3 after seeing the 2 teams play last week?

I think baltimore coming off a short week and playing the Pats on the road next week is making the wise guys lean towards Phila. If the wise guys indeed do like Philadelphia? they would love that the line went from 3 to 1.

I guess where I was going with this from the beginning is… Vegas thinks the eagles are a lot better than they played last week. Couple that with this being a possible let down game for baltimore. If the Eagles are able to win, Vegas can make out big.

Agreed. Eagles have a big advantage in that its:

That being said, I think Vegas just erred with the opening line(it happens). As I stated, the Birds are a public team, and they often get action on them regardless of the number. I think they anticipated more $$ coming in on the Birds, even at -3…didn;t happen, and now they’re in a bit of a bind, thus the very strong move down to -1….anything to get more $$ onto the Eagles….

Not buying a donut game for the Ravens. Harbaugh was a long time Asst in Philly and will his Team jacked to win at the Linc I expect no letdown from the Ravens who still they should have won
That AFC Champ game last year versus the Pats.