Is It Time To Give DeSean Jackson A Chance To Return Punts? 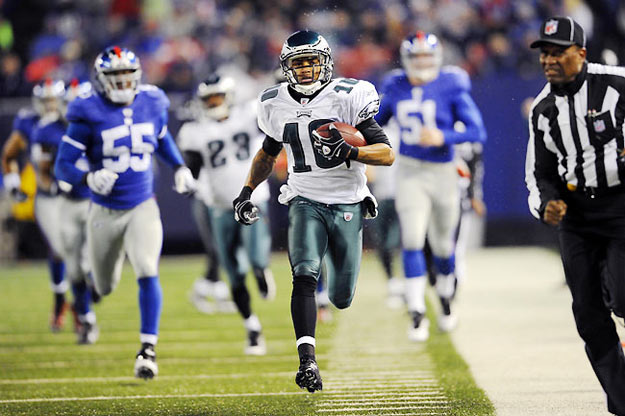 There’s a slight chance the Eagles could give wide receiver DeSean Jackson the chance to get the team going by putting him back there on some of the punt returns.  Rookie punt returner Damaris Johnson has fumbled only once, but he also seems to be scared back there to the point where his fear of fumbling of muffing a punt is dominating his thinking and has rendered him ineffective as a punt returner.

He’s doing everything safe and has been unable to use his speed and quickness to make defenders miss.

I think he’s had only one punt return for over 10 yards and he’s tied for the league lead with nine fair catches.  Every time he fair catches the ball on a punt, it seems like he’s relieved.  That’s not he mindset of a good punt returner.

The Eagles need a threat back there because of the way they’ve been struggling offensively.  I wouldn’t put Jackson back there every time, but I would give him some shots against this Detroit team because they have gave up a punt return and kickoff return for touchdowns in a loss to Minnesota a couple of weeks ago.

If there was anytime to give Jackson a shot, this is the week.  Eagles special teams coach Bobby April didn’t commit to using Jackson this Sunday but he also didn’t rule it out.

“He’s always ready to go”, April said. “I mean, he’s like a pinch-hitter. He’s ready to go. We just have to call his number,” April said. “Most of our punt returns have not been traditionally field punts. They’ve been up closer to the 50-yard line where you have to worry about a lot of things and you have to spread yourself a little bit thin. It’s tough to make just an all-out concentration on the punt return in that phase of the game.”

The Eagles can’t keep treating Jackson like a China Doll with the offense struggling and the rookie returner playing scared.  Something has to give and I think they need to put Number 10 in there at least a few times this Sunday, if they find themselves in danger of losing this game.

Eagles Should Know The Weaknesses Of The “Wide Nine”

Michael Vick Admits His Family Does Have A Dog

What A joke Coach Bobby April is.. He talks round and round in Circles during his Press Conferences but never says anything of value.. Fire this Turkey already… Also Danarius Johnson is just not cutting it, he’s playing scared out there.. I would rather See Mardy Gilyard return punts for at least he can get 10 Yards or so.. but they really should use D-Jax, but they are pussy woops and won’t for fear of him getting hurt.. This Organization is Soft from Top to Bottom and will nevver Win anything of consequence..

Special teams as a whole has not been good, so why single out a single player? oh yea, I forgot its “what we do” here!

Nope..keep him off kick return for now. When the Eagles make the playoffs “Yes I said it” then I won’t mind seeing him return some punts. Bigger than the punt return game is the kick return game in my opinion. At least with a punt if you call a fair catch, depending on where the opposing team is kicking from you can still get the ball pass the 20 yd line. Kick return however is a different story. Dont even get me started on the kick coverage teams…in my opinion first article on GCobb written in regards of ST, should of been about the coverage teams!

Special Teams have gotten worse adn worse each Year since overpaid, windbag from Buffalo Bobby April was hired and who at that time was the Highest-Paid Specail Team Coach in the NFL.. Fire his Ass and Hire Ike Reese and use Mike Zordich to assist him as SPecial Teams Coach.. ..

Or maybe zordich as coach and ike as assistant..