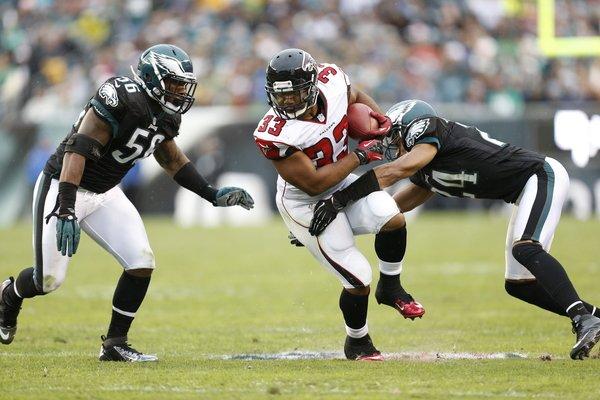 The Eagles organization was out-played and out-coached today by the Atlanta Falcons. There’s no other way to explain what Atlanta did to Andy Reid and his ball club.  This was a total domination by the Falcons.  They controlled the football for nearly the entire first half and converted third down after third down.

“That was an embarrassing performance”, Reid said afterward. “We obviously didn’t start fast enough. We didn’t get off of the field on third downs early. We’ve got to be able to do that and then they got some big plays on us. We did not have big plays offensively. We started slow again, at least through the first few series there. I’m stating the obvious [that] we need to get better. I need to do a better job.”

The Eagles ran only four plays in the first quarter as the Falcons built themselves a 14-0 lead.

It took the Falcons 16 plays to move the ball from their twenty-yard line, 80-yards for the first touchdown of the game.

On the second offensive play of the game for the Falcons, Matt Ryan hit Eagles rookie defensive tackle Fletcher Cox right in the hands, but he dropped the ball.  Looking back, it was the Birds’ best chance of stopping the Atlanta offense in the first half of the game.

On the first third down play on the first drive of the game, Atlanta came out in a bunch formation and somebody left Falcons wide receiver Drew Davis wide open on their left flat.  Safety Nate Allen came over to make the tackle, but it was well after Davis had picked up the first down.

On the second third down play on the first drive, defensive end Jason Babin was caught holding Falcons running back Jacquizz Rodgers.  The Birds were blitzing some of their defensive backs, so they had Babin in coverage on the play.

The Falcons got into the bunch formation again for the third third down play.  Atlanta’s number one receiver, Roddy White simply went downfield about fifteen yards and hooked up.  Ryan put the ball on his numbers as the Eagles defensive backs looked on.

Birds cornerback Nmandi Asomugha dove to try and knock the ball down, but to no avail.

The fourth third down situation was a third and one.  This time the Falcons handed the ball off to Michael Turner and he gained the yard to keep the drive going.

Ryan hit him in stride and the only thing in question was whether he got his feet down.  He got them down by dragging his right foot when he caught the football.  Falcons had themselves a 7-0 lead.

Things got worse for the Birds when the offense went three plays and out.

Michael Vick threw a pass to Brent Celek which should have been caught, but wasn’t placed very well.  On the next play, LeSean McCoy tried to run outside to his left, but saw no room.  He brought back to his right and lost a yard on the play.  Vick was sacked on the next play and the Birds had to punt the ball back to the Falcons.

Atlanta put together another scoring drive.  They had the ball for all but 1:52 seconds of the first quarter.

Vick Concedes To Giving Up Starting Job, Although Reid’s Not Benching Him

the defense was guessing all game… looked like they tried to blitz alot when they didnt need to……its apparent the talent level is lacking on defense…Nnamdi is mediocre – he is physical off the line at 6-2 210, but he lacks the speed and skill to cover people off 5 yards….DRC is a flag happy cover corner…. gets away with a lot….the safeties blow….the DL is average…..

the offense will continue to struggle with Vick at QB…he cant read a blitz or a defense… he lacks common sense and continues to throw sidearm garbage….time for Foles…

the special teams sucks…April is next to be fired…

Reid is a goner….finally, there is a GOD…. hopefully, Lurie hires a young up and comer to replace him