Penn State Comes Up Short To The Buckeyes, 35-23 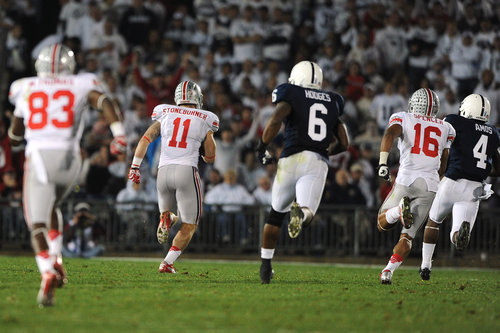 The Penn State Nittany Lions lost in Happy Valley to the Ohio State Buckeyes in what some were calling the “Ineligible Bowl” this past Saturday. The first half served as more of a defensive battle. Ohio State broke the game open in the third quarter. The final score was 35-23.

Ohio State got the ball first and failed to score. Penn State had a chance to score on their next drive, but quarterback Matt McGloin failed to connect with wider receiver Allen Robinson on what would have been a wide-open touchdown.

The game’s first score came off of a blocked punt from Penn State linebacker Mike Hull, which was recovered by linebacker Michael Yancich. Ohio State was able to answer back with a 1-yard touchdown from running back Carlos Hyde. The teams went in the locker rooms tied at the half.

Ohio State scored first in the second half with a pick-six from Penn State’s 17-yard line. They would go on to score 14 more points before Penn State scored another touchdown. Penn State did, however, score a field goal during that time span.

Normally any loss to Ohio State would be filled with anger, but this one was different, at least to me. That could be due to the fact that Ohio State gains as much as Penn State would have with this win. Either way, it still would have been nice to have a better chance at winning the Leader’s Division.

One thing that did stand out about Penn State was the fan support. For those that don’t know, the stadium’s capacity is 106,572 people. There were 107,818 people in the stands for this game. That doesn’t include the recruits on the sidelines, and other people that were not working the game. This was also the largest crowd for the season.

I was not personally in attendance for this game, but I heard this might have been the loudest the stadium has been in awhile. This brought back a few memories. During one of last season’s games, the crowd was so loud that my ears were ringing as I stood on the sidelines. Another memory comes from Joe Paterno’s last game. I regretfully decided to leave early due being so cold. An hour later I was on my way to the Women’s Volleyball match, which was on the other side of the campus. I was about two minutes for the building when I heard the “We Are” chant. That moment may not be special to anyone but me, and I’m okay with that.

Penn State drops to 5-3 for the season while Ohio State remains undefeated at 9-0. Penn State visits Purdue this coming Saturday for their next game.

Eagles Activate Mike Patterson, But May Be Without Nate Allen