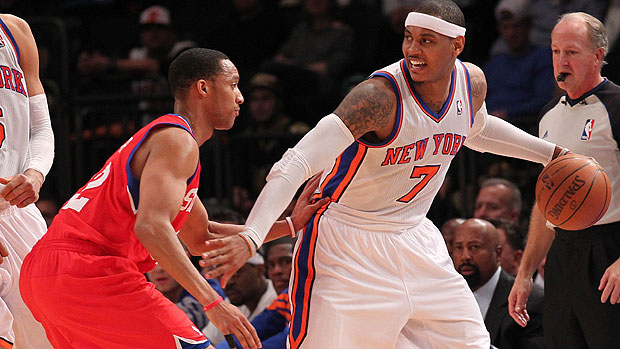 The Philadelphia 76ers played their second game of the season on Sunday afternoon, falling to the New York Knicks 100-84. The loss evens their record at 1-1, but they’ll get another shot at New York tomorrow night in Philadelphia.

Eagles Activate Mike Patterson, But May Be Without Nate Allen

Wher’s Pom-Pom Waviong Jon Hart
This 76ers Team is about a 43-45 Win Team and a Middle Seed (5th-6th) and out in the 1st Round.. Is there anything new here that I am missing..

Pman shut up. You are a sorry Philly fan. I’m sorry we don’t even have our big man yet. And we still are a team to reckon with. One game!!!! I live in Charlotte. Would love to see you and look you in the face and tell you to relax and have a beer. You are so quick to hate on your so called teams. And don’t give me that’s reality crap. You are negative all day.

They overused Lavoy Allen, Nick Young and Evan Turner in yesterday’s game. Turner needs to learn how to shoot (2 for 9 sux). The Knicks look like a different team when Carmello plays defense, it appears to inspire the whole team to step-up their game. I wrote the Knicks off this season, but if Carmello can keep up the intensity that he showed yesterday, they could be dangerous.

athletic team that can’t shoot…. it’s going to be an up and down year for them…. most likely a few games above .500.

They are missing a true star on the team and hopefully either Bynum comes back or they sign a stud after the season with all their cap space..

I think Denny said it best – why did Doug Collins not play Spencer Hawes more. You go with the hot player.

Miami had trouble adjusting to Melo playing the PF position also. NYK were trading 3pt for 2pt against the Heat also. There is no way the Knicks can shoot lights out the whole season like they have been shooting on double teams for Melo around the 3 point line. Unfortunately for the Sixers they are getting the Knicks back to back when they aren’t missing from 3.

Fraudman- I’m right here. I don’t run away after losses or wins unlike u who only come on this site after a loss. That’s what u live for? For the philly teams to lose? Yet u call yourself a fan? Fraud get a life, get a hobby, get a clue. U don’t watch the games at all u don’t go to any of the games u have no say fraudman fraudfan..

E0S– Good stuff man. But I see the sixers winning this one tonight. They’ll play melo totally different. Probably more double teaming instead of allowing Thad to play man on him which didnt make any sense

I love how ppl always bring up Iguodala and his “defense”. That is the most overrated defensive player I’ve ever seen. Stars from other teams would STILL hit their average or above it whenever they played us. Iggy’s atheleticism helped us with our TEAM defense, but one on one, Iggy got owned by the stars of this league constantly.

Small ball is back (Bynum hurt, Brown hurt, Hawes 2nd team, Moultrie too tall to play) Doug Collins loves small ball – the stat I am most looking at is Jrue Holliday’s assist numbers – if he doesn’t get double digit assists this team is in trouble – if he falls short of 10plus assists he has to get 10 foul shots then – this 5, 6 assist total and taking one outside shot after another is a losing formula — I’m hard on Jrue because Doug is handing him a free pass to be the leader of this team

Get rid of Evan Turner and Thadd Young for a real scoring Power Forward
then maybe this Team can go somewhere, if not, look for another 42-44 Win Season and a 5th/6th Seed with an early exit from the Playoffs
Anyone who thinks this Team is a legitimate threat in the NBA Eastern COnfernece doesn’t know basketball very well.. It’s still a Jump-shooting, poor rebounding and boxing out Team.. They are what I said they are…

Evan always has an open shot — he is a great one on one player easily finding open space off the dribble( he understands floor spacing), the problem is those shots never go in —- I wish he would use the backboard on 75% of his shot attempts until Christmas.
one positive about Evan is he does get 6 foul shots a game which is good but those missed shots are over shadowing his few positives.

Another weak area in his game which he was able to get away with in COllege is that he dribbles the ball too-high when backing down a player and these PRo athletes are quicker,longer and snatch the ball away from him that he was able to simply get away with at the College Level.. he dribbles too high and and isn’t quick enough or in control enought to get by anyone from the circle area making him to shoot way too many off-balance and awkward shots..

I want to believe in this years 76ers team because I am in NFL draft mode after week 8. No hockey and the best Philly college hoop teams play in Mid Majors — St. Joes, Lasalle and Drexel which means no top 25 ranking

It’s only three games in relax, no bynum or J rich let them gel a little bit first. They will be fine I hope LOL.

Wednesday night’s game was difficult to watch — back to scoring 36 points in a half (New Orleans)
Turnover central in the first half – the team must have heard an earful at halftime because they took care of the ball in the 3rd and 4th and managed to get their 2nd win.
Evan even looked good playing Wednesday.