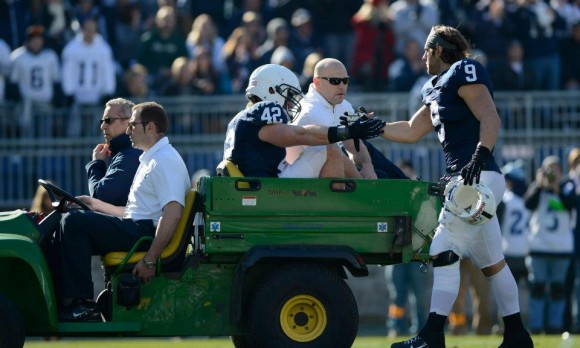 In what has been a strange and challenging season for a courageous young Penn State squad, the Nittany Lions secured their seventh win, which has been quite accomplishment considering the circumstances.   They dominated the Indiana Hoosiers at home by putting up 45 points and allowing Indiana only 22. The win didn’t come without some pain as Penn State lost a key defensive player in senior linebacker Michael Mauti early in the game.

The Nittany Lions scored first on a 26-yard touchdown pass from quarterback Matt McGloin to wide receiver Allen Robinson. The McGloin and Robinson combination hooked up for two touchdowns in the half; the first was for 53 yards, and the second for 10 yards.

Indiana got on the board with a 26-yard field goal off the foot of kicker Mitch Ewald. They then scored on a 2-yard catch from tight end Ted Bolser. Indiana’s final score of the half came from a 44-yard field goal.

The teams would go in for the half with Penn State up 28-13.

The game tightened up in the first few minutes of the 3rd quarter. Indiana was able to pull within six before Penn State was able to score again. Unfortunately for them, their last score of the game came from a 46-yard field goal.

Penn State would finish the game with a 17-0 run. Their last two touchdowns came from a 1-yard run from running back Zach Zwinak, and a 4-yard run from fullback Michael Zordich. Kicker Sam Ficken added their last three points with a 28-yard field goal.

Robinson also had a record setting game. He now holds the program’s single-season reception record. He also set a career high with 197 receiving yards. If Robinson is this successful next week, he’ll break a few more program records.

When you look at the stats sheet one would think Penn State and their fans would be happy. The reality is that no record or stat mattered after Michael Mauti was carted off the field with a left knee injury.

Mauti was a leader on the team before he tore his left ACL early last season. Although he was out for the remainder of the year, Mauti continued to support the team from the sideline.

The senior linebacker stepped up his leadership role this year and faced reporters along with close friend Michael Zordich after the NCAA named its sanctions. Both stressed how they were committed to the school and its program.

His teammates and coaches were very somber after the injury occurred. Linebacker Gerald Hodges tweeted, “If I could give my knee to my brother#42 he woulda had it by the end of the game!! #mauti#brother# road dogs.”

According to Ben Jones, a reporter for StateCollege.com, head coach Bill O’Brien was “emotional,” and seemed “a little testy” when questions about Mauti were asked during the presser. Jones also tweeted that defensive coordinator Ted Roof was “practically in tears” during his media time.

Mauti did reappear on the sideline in the 4th quarter wearing his warm-ups. He was using crutches to walk.

At this time, there is still no “public” update on the severity of his injury.

I used quotations around the word public because it seems that the coaches know more about Mauti’s injury than they are letting on, as they should. From their reactions, it seems Mauti has played his last snap as a Nittany Lion.

Personally, I would love for the key defensive player to run onto the field for the proper last game of his career this upcoming Saturday. Either way, this young man has earned my respect.

Penn State closes out their season next week against Wisconsin. The kickoff is set for 3:30 p.m.