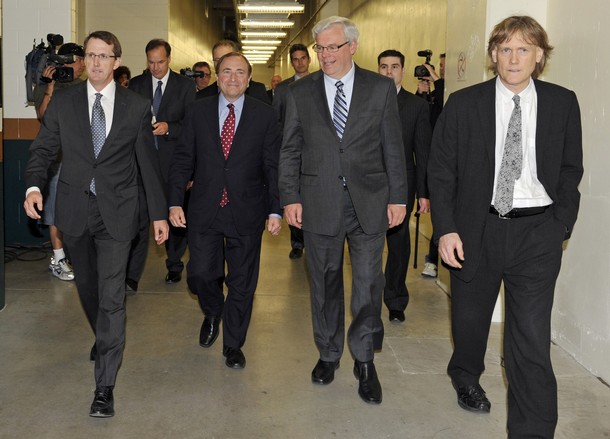 I’ve been reluctant to continue reporting on the ongoing NHL lockout talks, largely due to concerns over my blood pressure and the waste of time that it would encompass.

Last week, both the NHL and NHLPA agreed to have federal mediators participate in the discussions in an effort to show they were “trying.” The mediators left after less than two days.

The NHL and NHLPA have now agreed to another meeting on Tuesday, with the new gimmick being that both NHL Commissioner Gary Bettman and NHLPA executive director Don Fehr will not attend.

Six players will be in attendance for the NHLPA, with no agents or other legal counselors present (always a great idea for professional athletes).  Josh Rimer of NHL Home Ice has reported that at least Sidney Crosby and Adrian Aucoin will be among those six.

Tuesday will mark the 80th day of the lockout. One day later, the NHL Board of Governors will convene in New York with the expectation of the cancellation of the remaining December games.

If the two parties can’t come to an agreement quickly, the cancellation of the entire season should come next.

The only way that optimism may grow after Tuesday’s meeting is if the players in attendance manage to divide the owners in the room.

It was reported earlier this week by Joe Haggerty of CSNNE that Jacobs had been dismissive of one of the Jets’ alternate governors at a recent meeting, though the exchange was denied by the NHL, the Jets and the Bruins.

“Winnipeg Jets representation at a recent NHL Board of Governors meeting piped up to say it was opposed to engaging in a long, bloody lockout sure to stymie their franchise’s momentum and hurt the game of hockey.

It wasn’t Winnipeg owner Mark Chipman, but rather one of the alternate governors representing the Jets.

Bruins Principal Owner and Chairman of the Board of Governors Jeremy Jacobs answered by reprimanding the Winnipeg representative as one of the ‘new kids on the block’ and informed him that he would know when he was allowed to speak in the NHL board room. “

The NHL likely selected Chipman to show that there were no cracks in their armor.  If there’s any hope for a season, Crosby and company will have to attack that link and expose it.