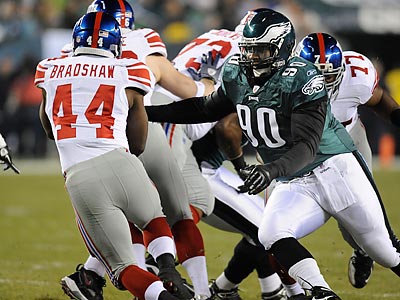 In an interesting move, the team signed Dixon to a two-year deal, keeping him under the team’s control through next season. Dixon was a very productive member of the defensive line rotation for the Eagles in 2009 and 2010. When he’s on top of his game, he can be a powerful presence on the interior of the line.

Dixon fell out of favor once former defensive line coach Jim Washburn joined the team, and was among the team’s final cuts at the end of this preseason. He’s spent time with the Jets and Browns, but has been out of the league since October 29th.

Dixon will have a chance to be part of the rotation again next season. Fletcher Cox and Cedric Thornton seem like the only defensive tackles on the roster that are locks to return next year. Cullen Jenkins and Derek Landri have had disappointing seasons, and it would be surprising to see either of them return in 2013, so the Eagles are getting a head start on the coming offseason by building up their depth at this position.

A Case For Trent Edwards To Start On Sunday

Chip Kelly Should Not Be The Eagles’ Next Head Coach

Sounds like a sign that the Eagles FO may be having second thoughts on firing AR. Even though I’m not a big supporter of AR firing him while he had half of a healthy team relative to his long history of winning seems pretty ridiculous.

If this disaster of a year doesn’t get Reid fired, I don’t know what will. He’ll be coach for life.

Almost as long as Mike Vick Birdo
I always likes DT Dixon and wanted a Roster Spot for him instead of Mike Patterson which I stated many times..I think Thornton cold be flexed outside as a DE on Short-Yardage/Red-Zobe giving the Eagles 3 big bodies to play the Run in the Red-Zone against more run first Teams with Cox, Dixon & Thornton

Watching the Little Cesar’s Bowl Game tonight on ESPN to watch Central Michigans LT who projects as a Top 5 OT in the Ddaft and probably a early-Mid 2Nd Round Selection his name is Eric Fisher (#79) who looks very good to me
Would probably begin NFL Career as a RT
But he is nasty, quick on his feet and looks fundamentally sound
I love these Bowl Games to watch these prospects in their final Coolege Games to see what they bring to the table as far as energy, and a passion to finish strong

It’s not just this year that would get Reid fired, regardless of the injuries. It is poor drafting, poor coaching, poor selection of coaches to the staff, failure to adjust during games and loyalty to guys who just cannot get the job done. It’s an accumulation of the last several seasons.Regardless of what gets reported out of the locker room, Reid’s voice has gotten stale. Why have they played hard down the stretch at times. These guys want a job next year whether its here or in another city. It’s just time for change.

I get what you mean, but obviously AR can’t coach the team, be the position coach for all positions, evaluate college talent effectively, run the draft war room and negotiate free agent contracts or poorly negotiate the Eagles out of certain free agents. From my standpoint AR’s coaching cupboard had finally been picked clean and he was left in a bad spot trying to re-stock. Heckert was a mediocre GM, at best and Roseman is downright awful. Irrespective of all of these factors the defensive ship looks to be righted and the offense is also looking like the more competitive type Eagles offense most fans are used to all be it run by a group of rookies and summer camp bodies. AR finally has the coaching staff formula right or mostly right, the O-Line will be healthy next season. There’s little reason to assume the Eagles wouldn’t make the play-offs.

Personally, I would rather let Reid coach out the last year on the contract with a healthy team and if he gets trounced out of the play-offs early he would be rightly condemned and fired for having an ill conceived “Pass Happy” philosophy versus getting fired for not having healthy players, for not having the best drafts that other people were in charge of, for bad locker room chemistry created by assistant coaches, players etc.

What Assts could Coach AR hure as a lame duck Butch
You can’t hire a Staff on a 1 Year Deals for they are looking for Security too
Maybe he would bring Castillo as O/Line Coach
I believe his Staff (outside of Bowles) have Conteacts that expire
This year (Mudd eho said he was going retire anyways
But WR, TE, RB & MM all come up after their final game
These guys have probably put feelers out already for their Jobs
This is the time for a clean break from AR and his Staff

All asst. coaches only get year to year contracts and they all put feelers out at the end of every season to see if they can get a better fit, more money, etc. The thing that’s odd about the Dixon signing is that Lurie will be saddled with probably at least $1M maybe $2M in a contract for a player that would likely get cut by a new coach with a different system. Lurie could have just as easily stepped in from behind the scenes and said the Dixon signing would be a waste of his money since Reid won’t be here and none of us would have known.