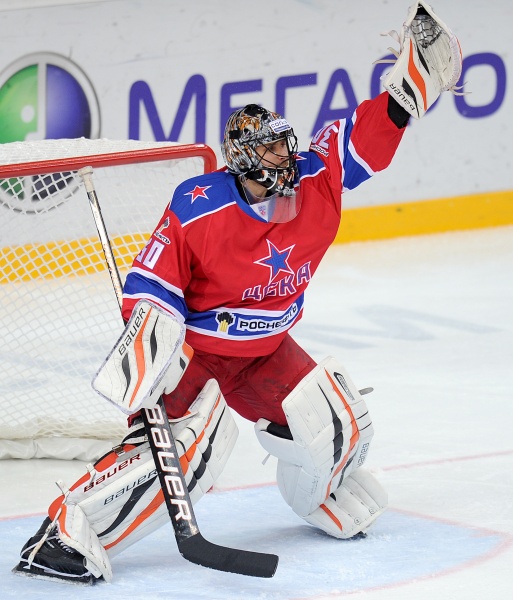 Philadelphia Flyers goaltender Ilya Bryzgalov and the KHL team that he signed with during the lockout, CSKA Moscow, have parted ways per Russian outlet Sportbox.

Here is the google translated report:

“As it became known [to] Sportbox.ru, Philadelphia goalkeeper Ilya Bryzgalov, who moved to CSKA Moscow club during the NHL lockout, [has] left the location. Press service of the team information about this does not yet have.

Note that in the current season, the 32-year-old Bryzgalov spent just 12 games of the regular season, in which 23 goals [against were allowed]. Performance at home goalkeeper specialists called not very successful. Goalkeeper himself has repeatedly stressed that it is associated with CSKA only [with a] temporary employment relationship.”

[Update: Kevin Allen of USA Today has followed up with the organization and provided additional information on why Bryzgalov may have left.]

“He’s visiting North American specialists over an upper-body injury and he will be back once he’s treated and healthy.

The Kontinental Hockey League team said that his contract remained in effect and that he had not cut ties, as had been reported.

‘We emphasize that the medical staff CSKA enjoyed the absolute confidence of the reason for the forced departure of goalkeeper is that he has turned to overseas doctors with the same injury before and was a successful therapy,’ the team said in a statement, according to Google translate.”

At the time that Bryzgalov was signed, CSKA already had an excellent starting goaltender in Ratislav Stana.  Stana is currently ranked 2nd in the KHL in goals-against-average and 4th in save percentage among goaltenders with at least ten games played (he’s started in 36 games).

The infrequent starts have not helped Bryzgalov get into a rhythm, though that should not be a lone excuse for his play. He has also publicly feuded with the media there, who picked up right where the Philadelphia media off.

The timing of the news may likely has to do with the recent developments in North America regarding the NHL lockout.

As reported on Friday, the NHL and NHLPA have begun collective bargaining agreement negotiations again. The NHL presented the players with a 300 page document for review, which has slowed down the immediate talks while the players evaluate the details.

Per Aaron Ward of TSN via twitter, “NHLPA/NHL laywers and financial staff met face to face. Still in the review and clarification stage.  Negotiating committee has not received notification to come to NYC.  Expected when bargaining session planned.”

The 2013 NHL season, should it actually take place, will mark the second year of the nine-year contract that Bryzgalov signed in June of 2011 with the Flyers.  It has been suggested by many in the media that the Flyers could rely on a compliance buyout that has been added by the NHL to the bargaining agreement to buy out his contract before the 2013-14 NHL season.

I do not expect the Flyers to buy out his contract, though anything can happen in the next six months if he tanks in the shortened season.  The organization would not have likely traded Bobrovsky in June had they any inclination of buying out Bryzgalov, unless they had absolutely zero foresight.

Of the remaining goaltenders in the system, Michael Leighton is a borderline NHL starter better suited to a back-up position; Cal Heeter is still a work-in-progress as a rookie in the AHL; and Niko Hovinen is struggling in the ECHL.

Unless a better trade option is available, they’re not in a very good position in net (what else is new?).