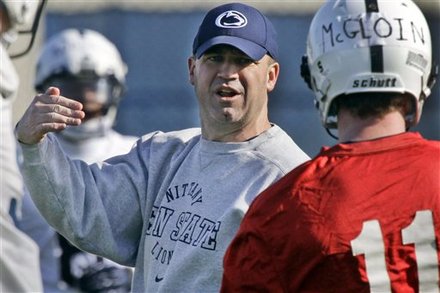 Current Penn State head coach Bill O’Brien is a very impressive candidate for any NFL head coaching job and that includes the Philadelphia Eagles.  He has been an innovator as an offensive coordinator for the New England Patriots.  A few years ago he utilized the Patriots talented tight ends Rob Gronkowski and Aaron Hernandez to revolutionize the NFL passing game by featuring them above their wide receivers.

No one had ever done this on the NFL level.  O’Brien led an offense quarterbacked by Tom Brady which tore through NFL defenses by being the highest scoring team in the league, despite not having any deep speed at the wide receiver position.  No NFL offense had ever been so explosive by featuring its tight ends.

You can’t say enough about the job O’Brien did last year at Penn State.  He came in and became a leader to the Penn State players.  O’Brien convinced to stay at the school and bond together, despite the circumstances.  He led them to a successful season despite tough NCAA sanctions.

You’ve got to shell out nine million, or maybe even eighteen million dollars before you can sign O’Brien away from the Nittany Lions, but I could understand somebody doing it, because he’s such a quality head coaching candidate.  If Jeffrey Lurie really thinks he’s the guy, I would say go ahead and pay the money.

O’Brien has proven he’s a forward thinking offensive coordinator.  He’s also proven he can lead young men to success and victory in tough situations.  So here you have a young man who is a proven offensive wizard and leader.

He would be up near the top of my list, if I were making the decision.  I definitely like the idea of going with O’Brien over Chip Kelly who has no NFL coaching experience.  O’Brien knows what to expect from NFL defenses, while hiring Kelly is taking a big gamble.

Syracuse’s Doug Marrone Should Be High On Eagles List