Will Niners Be Able to Get To Rodgers And Protect Kaepernick? 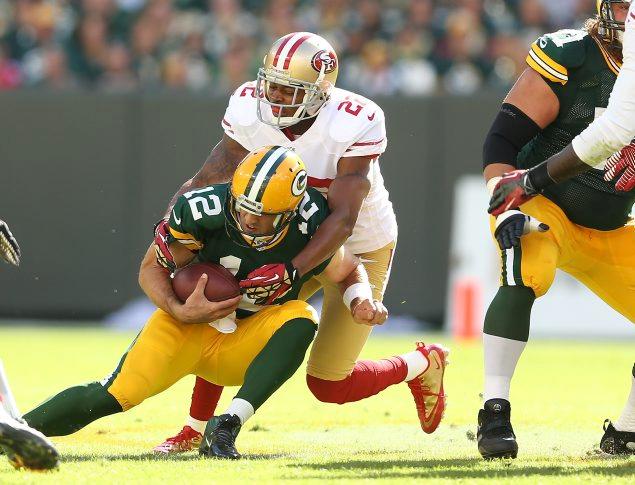 One of the best games of the weekend will be the San Francisco 49ers vs. the Green Bay Packers.  The Packers have had an explosive offense for quite a few years, but their defense is starting to regain the form it had in their Super Bowl year.  The Niners are one of the most complete teams the NFL has to offer, except they still have question marks surrounding the quarterback position.

Here’s a quick scouting report on the matchups:

When Packers have the football: You have possibly the NFL ‘s best quarterback Aaron Rodgers against what could be the best defense in football, a Niners unit with six Pro Bowlers.

One of the keys to the game will be the health of 49ers defensive end Justin Smith.  He’s a beast with brute strength who forces teams to single block outside linebacker Aldon Smith and that equals sacks and pressure on the passer for San Francisco.  He hurt a triceps muscle and missed the last couple of games.  The Niners defense hasn’t played as well in that time.  He’ll be back for tonight’s game, but we’ll have to wait to see how effective he will be.

Niner middle linebackers Patrick Willis and Navarro Bowman should be able to intimidate Packers talented tight end Jermichael Finley who is prone to dropping the football when facing big hitters like Willis and Bowman.

In the battle in the secondary between Niner safeties Dashon Goldson and Donte Whitner and the bevy of Packers wide receivers, I’ll be interested in seeing how the officials call the game.  Green Bay will be able to get open and Rodgers will be able to get them the ball, but how many will they drop.  Will the San Francisco safeties be allowed to lay some licks on the receivers without being flagged.

San Franciso must get consistent pressure on Rodgers or he’s going to pick them apart, while getting the ball to Jordy Nelson, Greg Jennings, Randall Cobb and James Jones.  These guys will drop passes, if they’re punished, but how will this game be called.  The referees will play a key role in this one.

When the Niners have the ball:  I’m interested in seeing what Packers defensive coordinator Dom Capers has up his sleeve for Niners young quarterback Colin Kaepernick.  He’s going to come out him with Clay Matthews and safety Charles Woodson.  The veteran defensive back will be the key because he will disguise the coverages and the blitzes in the hunt for a big play.

Woodson is fast enough, tough enough and big enough to blitz and tackle Kaepernick in the open field.  The Packers will have to find a way to keep Frank Gore in check, or his rushing will set up the rest of their San Francisco offense.  They slowed down Adrian Peterson last week, but they didn’t have to worry about a Vikings passing game.

This time they’ll have to stop a strong running attack without putting eight guys in the box.  If Gore gets things going, Kaepernick will be able to run some of the read option for big yardage, as well play action passes to Michael Crabtree and Randy Moss.  In addition, tight ends Vernon Davis and Delanie Walker will get in on the action, especially in the red zone, if they can get Gore going.

My pick:  I’ve got the Niners in this one because I think they will get pressure on Rodgers and intimidate his receivers, so that they’re dropping passes.  Green Bay will put some points on the board, but they’ll also turn the ball over a few times.  I see the San Francisco running game opening up things for Kaepernick and the rest of the Niners attack.  I see a 30-24 game in favor of the Niners.

On a side note:  The Eagles don’t have to worry about the Dallas Cowboys for another couple of years.  They’ve made the mistake of hiring and old man, Monte Kiffin, who has seen his best days.   I watched him closely at USC and he wasn’t able to adjust to the every changing offenses he was facing.  Remember these were colleges offenses, who were shredding his vaunted Tampa Two defense.  Everybody’s time comes and goes.