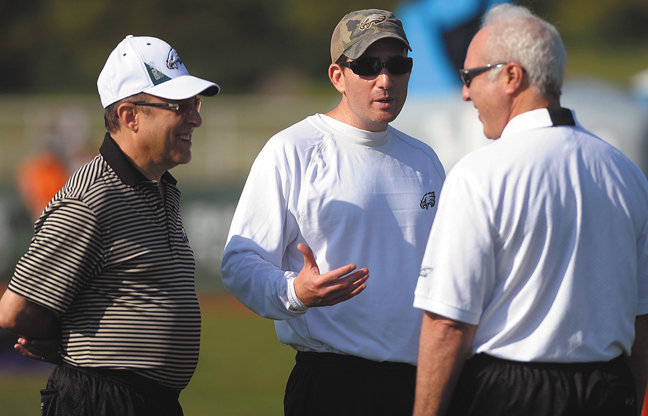 Jason La Canfora of CBSSports.com wrote an article earlier this week citing anonymous sources who accused Roseman of being “drunk with power” in his position with the Birds.  The article charged that Roseman was the reason that the Birds couldn’t find a head coach.

Lurie believes La Canfora got his anonymous quotes from Banner.

Frank said he believes Banner is still bitter because Roseman won a power battle that led to Banner ouster from the organization. Remember that Roseman was brought into the organization and taught the NFL business by Banner.

One thing that comes out very clearly is that the news conference about Banner leaving the organization on his own wasn’t based on truth.  He was shown the door.  If he left on his own, then why would he be bitter.

I’m surprised Joe was able to sit there through the entire news conference without getting up and throwing his chair.

I’ll bet you that Banner would give his right arm to see the Browns have more success than the Eagles.

Can The Eagles Chip Kelly Take The Lead In The NFL Strategy Race?

Will Kelly Continue Calling The Plays From Sideline After Pre-snap Reads?

G, This is old news, us bloggers on here said Banner was behind all that negative talk last week. LOL

Wood teeth Banner, is a sniveling, little, vindictive, worm! I have no doubt he’s behind it! But, that doesn’t mean he was wrong.

Cleveland could have Brady and still suck.

Regardless of who said what, Roseman is on the clock. Let’s see what this guy can do for the Eagles and city of Philly. I’m behind Kelly and Roseman for now. But only time will tell if Kelly was a good hire over Bradley, and Roseman having control over most of the decision making

“The Eagles haven’t won any public relations battles over the past two weeks, but don’t cry for Roseman, Lurie, president Don Smolenski or anyone else tied to the organization who might have been inaccurately portrayed in the media.

Chances are, somebody somewhere has been the victim of their spin, too.”

Eagles will retain Ted Williams on the coaching staff.
He has to be Jeff Lurie’s snitch to last through Rhodes, Reid and now Kelly.

Gotta Luv It
Reply to  eagles0superbowls

What are you kidding ??…
Duce, Buck, B-West ,Shady…couple years of thousand yard rushers under Andy Reid
Dude is a good coach

Horton is now the Browns Defensive coordinator…..Look for the Eagles to be
2-14 next season.

I think they should trade down from the #4 pick and then trade down again but stay in the first round stock pile as many picks as possible and reload our defense we need S,CB,LB,DT.

I hope they blow Lovie away with a deal for DC. Lovie’s defenses snatch the ball with authority and consistently.