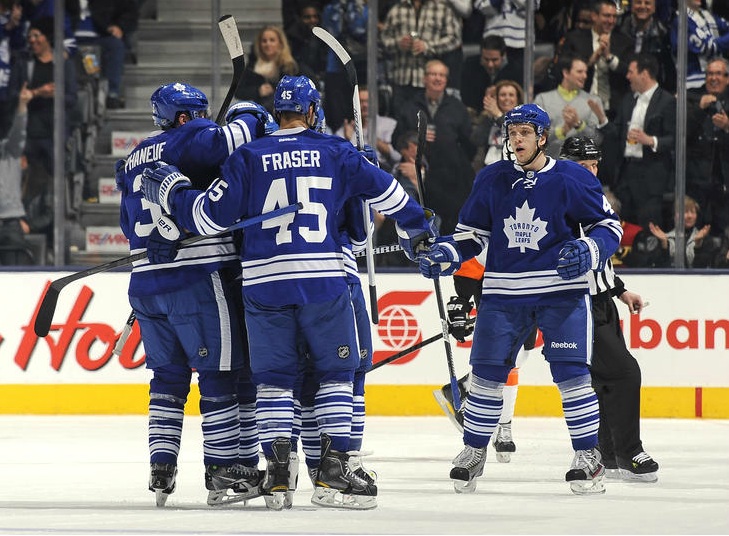 The storyline heading into the Philadelphia Flyers-Toronto Maple Leafs game was that Luke Schenn and James van Riemsdyk would both be playing against their respective clubs for the first time since being traded in June 2012.

Both of them arguably played well, providing some direct visual feedback that it was an even trade between general managers Paul Holmgren and Brian Burke (who is no longer the GM for the Leafs). Schenn assisted on the first goal of the game on the first shift while JVR scored early in the third period for his eighth of the season.

That’s about where all the good will ends. A garbage effort beginning in the second period was never overcome in the final forty minutes of play, ending with an easy 5-2 victory for the Maple Leafs.

The opening period was acceptable. Wayne Simmonds buried a shot 38 seconds into the game, and the team generated 11 shots on goal without a powerplay opportunity.  Ilya Bryzgalov looked sharp aside from a long shot from the point from Leafs captain Dion Phaneuf that eluded him through a screen.

The only concern from the first period was that the team took too many penalties. Zac Rinaldo, Mike Knuble and Claude Giroux each found themselves in the sin bin after taking lazy or ill-thought penalties. In nine games played, Knuble is now second on the team with seven minor penalties.

The opening three minutes of the second period could best be described as “unconditional surrender”.

The team coughed up two goals 28 second apart as the result of poor defensive plays by Tom Sestito, Nicklas Grossmann and Braydon Coburn. Colton Orr, with all of 11 goals and 952 PIM in 390 NHL games, found himself on the scoreboard with little effort.

A fourth goal less than four minutes later was the tipping point for Flyers head coach Peter Laviolette, as he pulled Bryzgalov to wake the team up. Back-up Brian Boucher, fresh from his recall from the Adirondack Phantoms, replaced him.

Once again, the team defense let Bryzgalov down. You can argue the first goal was a stoppable shot if Bryzgalov made a better effort to find the puck, but he was left with zero support in the crease on the other goals. It was expected that Boucher would earn a start in Winnipeg to rest Bryzgalov, but it’s looking like the team will need their starter tomorrow to cover up the team’s collective mistakes.

As if the defensive woes weren’t enough, the powerplay struggled to convert on a five minute powerplay after Leafs defenseman Korbinian Holzer threw Tye McGinn into the boards dangerously. According to Tim Panaccio of CSNPhilly via twitter, “GM Holmgren said on TOR radio that the club looks like it lacks confidence with the puck on the powerplay.”

At least he is acknowledging the issue, even if there isn’t an obvious personnel fix at the moment (unless someone knows how to heal Scott Hartnell faster).

On a side note, McGinn has now gone awkwardly into the boards twice in the last three days. He still finished the game and scored the second goal of his budding NHL career in the waning minutes.  If anyone deserves a maintenance day, it’s him.

Boucher made nine saves on ten shots in 31:50 of ice time.

The Flyers will gain no rest after this loss, travelling three timezones east to the frozen tundra of Winnipeg. The team desperately needs points to crawl their way out of the Eastern Conference basement, but they did themselves no favors.

Confidence is a fickle thing, and hopefully the players don’t lose any as they continue their difficult road trip tomorrow.

Eagles Continue Down The Wrong Path By Bringing Back Vick