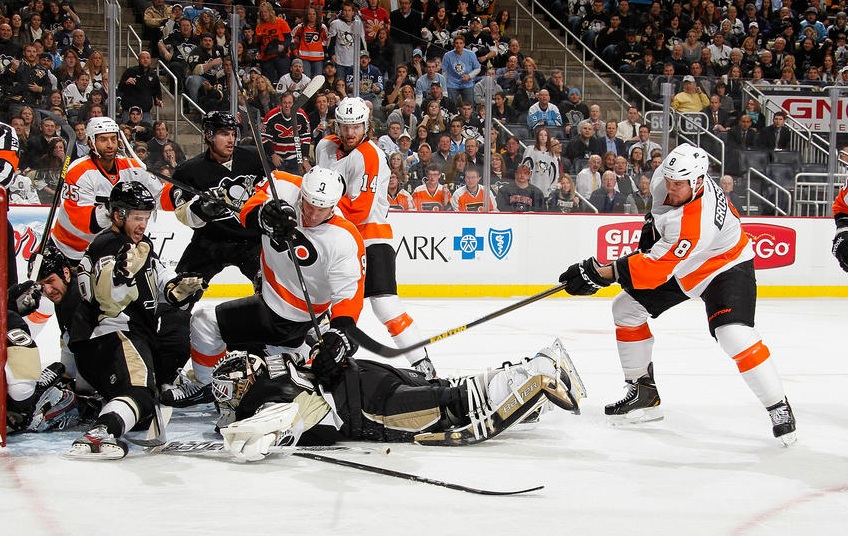 I had thought that the days of nail-biting, back-and-forth, high-scoring barnburners between the Philadelphia Flyers and Pittsburgh Penguins would be over after the 2012 Stanley Cup quarterfinal series wrapped up.

The second “Battle of Pennsylvania” game this season matched the intensity of that playoff series goal-for-goal, though, with Jake Voracek completing a natural hat trick to win the game 6-5 with 91 seconds remaining.

It was a game that had all the markings of an eventual loss, after the Penguins scored two early goals in the first period. The Flyers of 2012 had made a career of playing from behind, but this year’s roster had not shown the same level of resiliency in any of their recent losses.

Then came a ridiculous goal mouth scramble that ended with defenseman Nicklas Grossmann finding the loose puck and threading the needle through six Penguins into the net. As Flyers’ scout Patrick Burke described it on twitter, “Penguins-Flyers just turned into Hungry Hungry Hippos for ten seconds.”

The game remained tied until an errant elbow from Penguins forward Craig Adams was called for a penalty. Voracek grabbed the lead on the ensuing powerplay, on a play eerily similar to his game winning overtime goal in Game One of the 2012 Quarterfinals.

Twenty-eight seconds later (eighteen seconds into the third period), Voracek added an insurance goal. With a two-goal lead on the Penguins, the Flyers needed to tighten up their mechanics and bunker down. The remaining 19 minutes left a lot to be desired, though.

Tyler Kennedy and Simmonds traded goals in the first ten minutes, though Simmonds’ deflected off of Penguins’ defenseman Matt Niskanen’s stick and changed directions on Vokoun. I scoff when players regularly say, “I jus’ get da lucky bounces, you know,” but that was as lucky of a bounce as one could hope for.

Three terrible back-to-back-to-back penalties between Mike Knuble, Ruslan Fedotenko and Max Talbot made life extremely difficult for Ilya Bryzgalov, who played very well in spite of the final numbers. He battled hard during the penalty kills, and the damage was limited to one powerplay goal by James Neal (with assists to Evgeni Malkin and Sidney Crosby, naturally).

A late goal by Brandon Sutter following a period that had been dominated by the Penguins was all but guaranteed to force overtime, if not for a “lucky bounce” for Voracek. A sharp angle shot from the side of the net snuck underneath of Vokoun’s pads and re-directed in.

In addition to the two goals, Simmonds also assisted on Voracek’s first goal and fought fourth-liner Tanner Glass to give him the Gordie Howe hat trick (yes, I realize the title is misleading, but a hat trick is a hat trick).

As entertaining as the game was to watch, many of the mistakes that plagued last season’s Flyers were on display throughout the game. It’s refreshing that the offense has scored 13 goals in the last 2 games, but the lazy penalties and suspect defense need to be addressed if the team is going to be taken seriously by anyone in the long run.

The win in Pittsburgh closes out the recent road trip 3-3-0, moving them closer to the 8th place spot in the Eastern Conference.

They return to the Wells Fargo Center tomorrow night for their third and final game against the Florida Panthers this season. I would be surprised if Brian Boucher doesn’t get the start in order to give Bryzgalov an extra day of rest following this one.

Notes From The Sixers’ 94-87 Loss To Minnesota

I wanted to reach through my tv and cross check Fedetenko and Talbot for their penalties late.

Very sloppy game, but definitely take the win in Pitt.

penguins/ Flyers best ticket in all of sports
Fights, lead changes 11 goals, 2 goals in last 3 minutes, high sticks, 5-3 PP, 5-3 PP still after PP goal – hits legal and illegal
I would say it was the best game on the year but they just played an entire playoff series that was even better —
two huge back to back wins
one game out of .500
Hartnell and Mezarios close to returning
Go Flyers