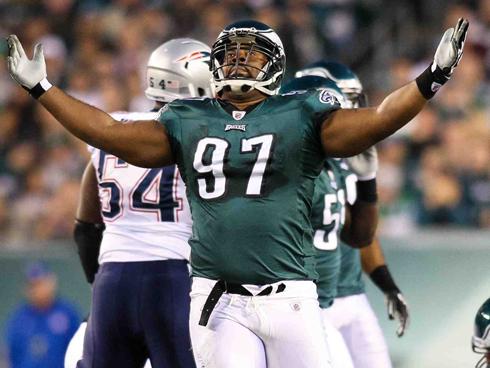 The Eagle have released veteran defensive tackle Cullen Jenkins.  The Birds obviously didn’t like what they saw of Jenkins on tape and they don’t think he can make the transition to another defensive system.

Jenkins has been a major disappointment for the Birds defense after getting off to a fast start when he was signed by the Birds before the 2011 season.  The veteran defensive tackle who is 32-years old became an afterthought on the Birds defensive line as the 2012 season progressed.

“I had a chance to speak with Cullen today and let him know of our decision,” said Eagles GM Howie Roseman. “It’s one of the most difficult parts of the job. He has been a very productive player in this league for a long time but we felt it in our team’s best interests that we go in a different direction. By releasing him at this point, it gives he and his agent more time to sign on with another team. We wish Cullen and his family all the best as he continues his NFL career.”

DT Lloyd will be our pick i think we trade down or stay pat an pick him up. Ive noticed alot of these Draft picks are injured, have heart issues pick bpa, there also making extra money by letting go of jenkins either to sign someone on the team or for trade purposes.

Can’t say this surprises me. I kind of think Jenkins was one of the guys that was viewed as “Partying with his millions after losses” in the locker room.

jenkins is a Stright-up Professional (Something this Team has lacked)
he will get picked up by his friend GM McKenzie of the Oakland Raiders withing 72 hours.. Raiders have 2 DT’s who are Free-agents , Richard Seymour and Bryant (who was jsut arrested this weekend in FLorida) and then still have the aging,overpaid Thomas Kelly, so the Raiders will likely get rid of all 3 and go sign Jenkins and Draft Shariff Floyd to play alongside Jenkins for Oakland..

I see the Eagles Getting Dion Jordan or Shariff Floyd. Not Oakland.

This is the 2nd time on this site where i saw you talk negatively about dion jordan.If you dont think he has a chance to be the next alden smith /jason pierre paul then you just cant recognize talent.

Where did I talk negatively about Dion JOrdan, I like him as a Prospect
but not a #4 where you need to get a Starter from Day 1..
Jordan is a rotational player in Year 1 and defintitely a 1st Round Prospect, but not at #4 in my opinion… Closer to a Mid 1st Round bout the 12th-18th Selection would be my guess..

And your an idiot for comparing him to Smith & JPP! 1st off, he’s hurt already, & he needs to gain about 30 lbs! Yeah that’s worth the #4 pick! GTFO, you clueless clown!

Also, you don’t waste a #4 pick, on an injured, skinny, project football player, who may, or may not be good!

Raiders will take DT Shariff Floyd with thh #3 Pick, Book it Pipo, there is little doubt in Draft Guru’s about this.. Raiders need a DT, FLoyd is the best DT on the Board..

Yeah and the way he barked at Reid in the preseason shows lack of respect maybe overall its just in his nature but regardless the Coach Elite coach or not you as a player should know your place. Just like we all know our place in the workplace. Again i am not saying he was a cancer but we need new blood the draft looks like what will be shaping out our Defense of the Future.

I wouldnt doubt it i know it hasn’t been sunny in south philadelphia since 2005.

At his Current Salary figure of $4.3 million.. I say release or try to Trade him which would be difficult with his recent history of Injuries and Salary leve.. Cut the Chord and move on with Herremans and gut these Players that have long term from the Andy Reid Era …

do you think the Eagles tried to cut his salary again and Jenkins said no, just release me?
3 down ( Bell, DRC, Jenkins) 49 more to go
More move like this
Less moves like Vick
next current Eagle’s agent to get a phone call, Mike Patterson; Howie Roseman wants to have a conversion and bring your play book

again, nobodies talkin about all these free agent signings by Roseman, in we’re givin away money by having to pay them going out the door. These were howie’s players , including Brandon Graham.

Were They?? Can you prove that??

So mr1charlton, in 1 post you are defending him and in another you are using him as a FA bust to make a case against Roseman? Well, which is it?

Jenkins did not produce the way that he was expected too. Whether that was system or his ability, who cares? He doesn’t fit the system going forward.

Plain and simple im not sold on Howie. you know a lot of long time eagles fan
aren’t sold on him either. In fact the 25th anniv of the Fog bowl is this yr, TO MANY FANS .IT WASNT THAT LONG AGO, and as we all watched it unfold,
just food for thought Howie was only 12 yr old. AND NOW HE’S RUNNIN THE DAMN TEAM, thats what has me concerned. hearing him talkin about the 3 technique and dixon playin the nose . HE AINT LIVED LONG ENOUGH

Hopefully bringing Gamble into the fold will help on the experience side of things.

Nice, I’ve beel calling for this for 2 Years.. He is nothing more than a Rotational Player at Best and since he’s making $4 Million, there are Players off the Streets that can give you the same Production as the 4th DT on the Roster..
Keep Cutting, looking for Herremans and Celek next

Yea I know GMCliff,
Just wishful thinking on my part, I think they are done Releasing Players except for Asmo if he refuses to take Pay Cut which I believe he and his agents will accept..
The 2 Players who I believe as Trade Bait for additional Picks in the Draft
Are DE Trent Cole and Guard Evan Mathis but these won’t happen to
Draft Weekend..

Herremans, Maclin, and Graham as well

We need depth i say keep Herremans, celek idk i think they will go after kelce the TE from Cincy the brother of our Center

If they cut Celek, then my prediction of a move for Eifert becomes even more plausible. (BTW – I don’t think they’re cutting Celek – Kelly will run a lot of 2 TE sets and will need more. Hense Eifert)

I am also not sure how they just cut Heremans either. Bell and King are gone. Now 2 DL gone.

At some point it becomes a numbers game…can’t replace everyone.

The Eagles should have cut his ass the day he got in Andy Reid’s face on the sideline during a game. That lack of respect should have cost him his job back in August, 2012.

Gm Roseman to Annouce 3 More Players Signed from the Candien Football League Tommorrow at 11am Press Conference..
My Sources state a LB, Safety and WR so looks like the Free-Agency Period was spent in Canada.. Good Times ahead

We go either go ot fisher at 4 or geno smith. We can get a quality nt in the second or third round gamble will find him

Just say no to a QB this year! Many other needs.. Build your team up a bit so that next year if you need a QB you can get him. If we need a QB next year we will have another high draft pick.