Reports: Trade Of Alex Smith To Unknown Team or K.C. “all but done” 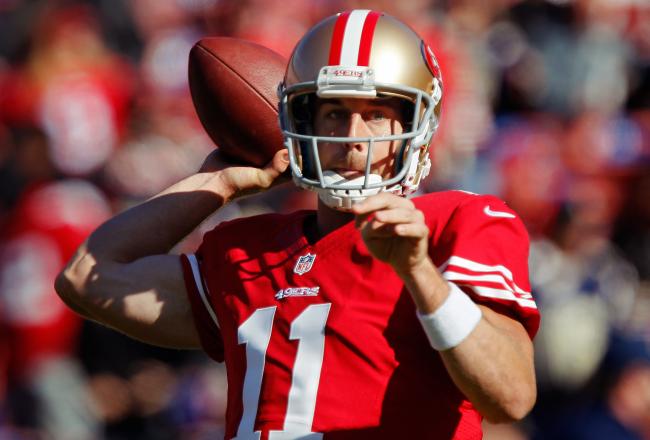 There are a number of reports circulating today about the trade of Alex Smith from the 49ers to either an unknown team or the Kansas City Chiefs.  Doug Farrar of Yahoo Sports reports that the deal is all but done.

Jason LaCanfora of CBSSports.com reports that the Niners are going to trade Smith, but he doesn’t know the name of their trading partner.

Ian Rappaport of NFL.com reports that the deal isn’t done, but the teams are laying the ground work for it.

If and when the Chiefs acquire Smith, it would probably eliminate them from pursuing Eagles quarterback Nick Foles.   There’s no question that Andy Reid feels he needs a starting quarterback, who isn’t on his roster.

If a deal indeed gets done between the Niners and Chiefs it makes plenty of sense.  We have learned since Reid left the Eagles that he had tried to sign Smith when he became a free agent during the 2012 off season.   So, it’s not a surprise that he would be trying to acquire the Niners backup signal caller since the Chiefs don’t have a decent quarterback on the roster.

Smith is a very good athlete, who took the Niners to the NFC Championship game of a couple seasons ago.  Last year Smith had a quarterback rating over 100 when he got hurt and lost his starting job to Colin Kaepernick.

Good i hope he goes to KC. I want Foles here with the Eagles. They would be foolish to trade him.

This is great. Passaholic Reid picks up a QB who is a game manager and will not be able to stop himself from throwing 50 times a game.

KC Chiefs return to the PLayoffs and dominate the AFC COnference for the next 5-7 Years as Coach AR becomes “Legend” around NFL Circles..
from 2013 theu 2017, the Chiefs go 64-16 in 80 Regular Season games nad win 3 Super Bowls.. the first by Alex SMith, the final 2 led by QB EJ Manuel
Coach AR was able to resurrect Careers of DE Trent COle, Safety NAte Allen,WR Jeremy Maclin who all became All-Pro during their Cheifs Careers
Andy is named Coach of the Year 3 Times in the next 6 Years and ha cemented his Place in the Hall of Fame and goes in wearing CHiefs Red & Orange… Meanwhile the Eagles go thru 4 Coaches over the next 7 Years
(Kelly quits in Year 2 to return to College, Mike SIngletary goes 0-16 in his only Season as Coach and Dick Vermeil even comes back to Coach a 2-14 Season before calling it quits, literally, on the sideline of his final game..)
Jeff Lurie has been diagnosed as “Legally Crazy” and has 24 hour car and the Franchise is actually run by an “Intern” at the NFL Office..

No truth to this rumor, it’s lying season in the NFL and these reporters are falling for every lie.

if Coach Reid makes an Alex Smith trade, he must hate the QB group at the combine