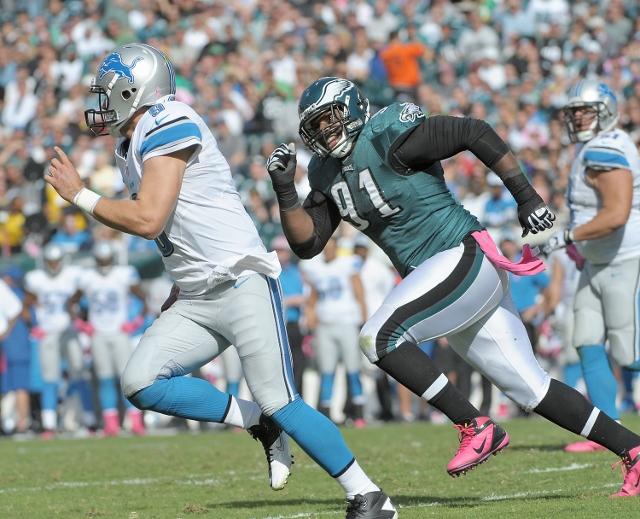 I expect them to continue to add to their defensive front seven personnel, but they already have some of the front seven pieces required to line up in the hybrid 4-3, 3-4, which Billy Davis will be playing this year.

This defense is very popular in the league right now because it allows you to put maximum pressure on the passer, plus you have the ability to drop as many as eight guys in coverage, if you want to do so.  The hybrid is nothing but a 4-3 alignment with 3-4 personnel.

Let’s take a look at the pieces they already have.

Free agent signing and former San Francisco 49er Isaac Sapoaga will probably be the one-technique defensive tackle for the Birds and Antonio Dixon should be able to play it as well.  It’s not a pure nose position because the defender isn’t lined up head-to-head with the center.  He’s off set on the center’s shoulder.

He will be attacking that center-guard gap.  The key is power, quickness and the ability to stalemate a double-team.  Sopoaga does a great job of splitting double-teams and getting penetration.  He eats up blockers on run and pass plays, which leaves the linebackers free to run and make tackles, plus it will free up the other defensive linemen.

They have the three-technique defensive tackle in Fletcher Cox, who lines up on the shoulder of the offensive guard away from the tight end side of the offensive formation.  The center and offensive tackle on each side of the guard will be covered by a defensive player, so that guard will be forced to single block Cox in most situations.  The former Mississippi State Bulldog will be a handful for every offensive guard in the National Football League. The youngster has great quickness and power, plus he has long arms and plays hard on each play.

In Davis’ defense, which is the same one that Gus Bradley ran in Seattle and the Ravens utilize in Baltimore, features the three technique defensive tackle.  Haloti Ngata plays the position for the Ravens and is considered one of the best defensive tackles in the NFL.  Wade Phillips utilizes the same alignment in Houston, which gave NFL Defensive Player of the Year, J.J. Watt the chance to dominate the guards of the league.

Cox needs to step up and become one of the best defensive tackles in the league.  This defense is designed to feature him.  Cedric Thornton will be one of his backups.

I believe the Birds will give the starting job at the weak side outside linebacker position or the “Leo” position to free agent acquisition Connor Barwin.  This is the key outside pass rush position for the Birds in Davis’ defense.  I don’t know what is the truth about why Barwin’s sack numbers dropped so much in the 2012 season, but they had better come back up in 2013.

Brandon Graham will likely be the backup and he will rush from the other side of Barwin on pass downs.  The Birds will have two Leo’s in the game on pass downs like the other teams who play this defense do, so Graham will get a lot of snaps even if he’s backing up.

Baltimore’s Terrell Suggs and Paul Kruger (now a Cleveland Brown), and Seattle’s Chris Clemons all play the Leo position.  They are elite pass rushers, who are also able to drop in pass coverage.  It is a must for this defense to have an elite pass rusher at this position.

I’m not sure what they’re going to do with Trent Cole, but I wouldn’t be surprised if he plays the strong side defensive end position because he’s very good at the point of the attack.  You have to be strong at the point of the attack when you play the tight end side of a defense because the offense likes to run that side and they use the tight end and the offensive tackle next to him to get a strong double-team block on the defensive end that side.  I could also see Thornton lining up at this spot.

Nothing will change for Ryans because he will continue to play the middle linebacker in the 4-3 defense even though the Birds will be playing with 3-4 personnel because they have the Leo standing rather than in a three-point stance like defensive ends in the league line up. Remember it’s a 4-3 alignment with 3-4 personnel.

Ryan was the Eagles best defensive player a year ago and the only one who was consistent, but I want him to play better.  I want more turnovers.

Kendricks should thrive in this defense.  He was out of position last year at the SAM position.  The youngster is too short to cover the tight ends in the league, who are all at least 6’3, while Kendricks is 5’11” at best.  But he is perfect for WILL because his job will be to tackle and cover the running backs in the league and this young man is made for that.

He is built like a running back and he runs a 4.4 forty yard dash.  Kendricks was a tackling machine in college and needs to get back to that this year, but I want a lot more big plays out of him on blitzes and in pass coverage.

As for the SAM position, they will likely go with Jamar Chaney there until they find a pure SAM linebacker, who stands about 6’4″ or 6’5″ and runs like the wind.  I don’t think they will pick Dion Jordan in the first round unless they plan on using him in the Leo role because you can’t justify using your first rounder to cover tight ends.

On the other hand, they could draft Jordan and have him be the number one Leo and have Barwin as the starting SAM linebacker and he becomes a Leo on pass downs.  They would immediately have two big outside linebackers and Graham would still be a backup Leo.

Don’t be surprised if they draft or sign some bigger defensive linemen and linebackers.  Remember Chip Kelly has said that he wants to get bigger and stronger as a football team and I think he was mainly talking about upfront on the defensive side of the football.