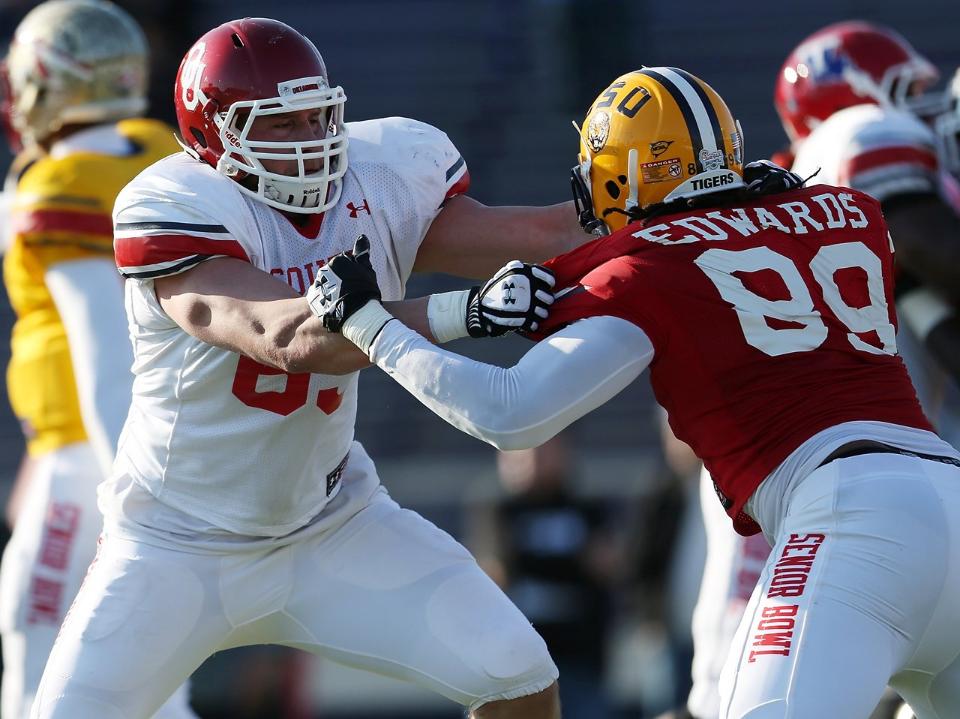 I was at the Senior Bowl in Mobile, Alabama earlier this year and I stood and stared at Central Michigan offensive tackle Eric Fisher as he was kicking butts during the team practices.  I didn’t go down there to see this young offensive tackle in particular, but he stood out so much that he was the player I remember more than any other player.

Fisher was dominating everybody who lined up on him whether it was a defensive end or linebacker, passing play or running play, it didn’t matter.  I was totally impressed with his discipline in his technique and loved the way he finished his blocks.  It looks like he’s going to be the number one pick in the draft.

It’s starting to look like the Eagles are going to have the chance to draft Oregon linebacker Dion Jordan, Oklahoma offensive tackle Lane Johnson and Utah defensive tackle Star Lotuleilei.  They could also fool everybody by drafting West Virginia quarterback Geno Smith.  E.J. Manuel has come out and said that the Eagles want him very badly.  Be aware of the head fake by the Eagles.

Johnson was a quarterback in high school and was a tight end when he went to Oklahoma.  He’s only been playing offensive tackle for a couple of years and seems to get better every time he plays.  They want athletes on the offensive line, so they can get out there on those quick screens to the wide receivers.  That was a favorite play for Kelly while he was a college coach.  Johnson is a perfect fit.

He will move into that right tackle starting position and Todd Herremans will take over from Danny Watkins at right guard.  Eventually Johnson will move over to the left tackle spot when Jason Peters retires.

They can’t make the mistake of drafting BYU defensive end Ezekiel Ansah because he’s only started nine games in his entire college career.  He had 4.5 sacks a year ago, but is that enough to draft him.  How could anyone be confident that he’ll be able to star at the NFL level against professional competition because he hasn’t proven that at the college level?

There’s talk of West Virginia wide receiver Tavon Austin flying up draft boards and he’s likely to get swallowed up by the Jets at pick number 13.  The Rams are said to want him badly, but they won’t be able to get him unless they move up.

Notes From The Phillies’ 5-3 Loss To Pittsburgh

E. J. Manuel On Eagles Interest in Him: “They want me pretty bad”

that is a good 32 player’s in G’s mock — I noticed Sylvester Williams DT from UNC Tarheels didn’t make G’s Mock which is a possibility. He might be a good 2nd round Eagle target.

Lane Johnson has the Tony Mandarich cautionary tale label slapped all over him if you ask me. The Jaguars will take either Dion Jordan or Geno Smith, I don’t really see them addressing the O-Line with their pick. It wouldn’t surprise me if the Raiders surprised everyone and snatch Joeckle.

Solid mock draft, I could definitely see the Eagles taking Lane Johnson with the #4 pick. Don’t be surprised if the Eagles take Dion Jordan at #4 if he’s available, I know they have other areas of need but Dion Jordan is the type of playmaker that will make our defense in the future scary like it once was. Then they could trade Cole/Curry to move up or acquire more picks. Plus Kelly is in love with him

In Geno’s losses last yr, he was way off the mark in half his throws after 15 yds!!!

Stop flip flopping GC! LOL! Smith is not going to Cleveland. John Jenkins to GB???? He’s a 3rd rounder. And you have Justin Hunter going twice, to Houstin & Baltimore. Come on! LOL!

If next year’s draft is supposed to be great and this year’s just ok, why not trade like hell for more picks next. the #10 or #4 pick next yr will be more talented than the 4 or 10 this yr.
By the time we are good enough for a Championship, Herraman’s and other players will be past prime, so I would trade now!!!

I dream about Clowney DE