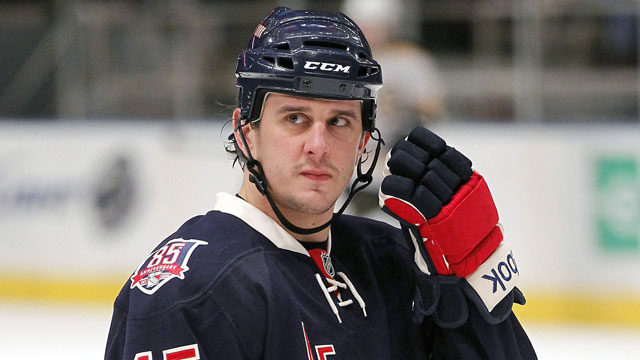 Following the exhausting marathon that was the 2013 NHL Entry Draft, the Philadelphia Flyers spent Monday taking care of business with their farm team.

Earlier in the day, the organization tendered qualifying offers to four of their six impending restricted free agents, per the Courier Post: Erik Gustafsson, Oliver Lauridsen, Brandon Manning and Eric Wellwood. Regardless of whether the players accept them, tendering qualifying offers allows the team the “right of first refusal” in the event that another team tries to sign one of them.

The three defensemen qualified all dressed for the Flyers last season. Gustafsson appears poised to make the big club permanently while Oliver Lauridsen is in need of another season of development in the AHL before seriously fighting for a position as a third pairing defenseman.

Manning struggled in his sophomore season with the Phantoms, but the organization still recalled him near the end of the season when the defenseman injuries began piling up.

The qualifying offer to Wellwood is a bit of a surprise for multiple reasons.

1. The organization appeared to sour on him after a four game stint to start the 2013 NHL season. I wrote at the time that I doubted he would ever play for the Flyers again based on recent history of their other farm system players that didn’t make an immediate impact in the NHL.

2. Wellwood severed his Achilles’ tendon during a game last season and is not expected to make a return to the ice until January at the earliest. Hockey players have a ridiculous threshold for pain, so maybe he’s back in two months, but it’s still unlikely.

3. The Flyers have a tendency to sign right up to the 50-player contract limit, and using up contract space on Wellwood in spite of the two previous points doesn’t make immediate sense.

The two players that the Flyers did not qualify were forward Mitch Wahl and defenseman Blake Kessel. Wahl was acquired mid-season for prospect Mike Testwuide and scored 1 goal and 4 points in 15 games. Neither player involved in that trade was expected to remain with the Phantoms next season.

Kessel was signed as a free agent after the New York Islanders let his rights expire. Kessel was a decent puck-moving defenseman while at the University of New Hampshire, but he did not have a strong rookie campaign with the Adirondack Phantoms.

He spent the majority of last season in the ECHL with the Trenton Titans, where his development improved. Kessel finished the ECHL season with 8 goals and 41 points in 54 games played. Kessel is worthy of an AHL contract somewhere next season, but he is still far from being a legitimate NHL prospect.

Even without Kessel, the Flyers have a number of defensemen at the AHL level in need of playing time. To address this (along with their scoring issues last season), the Flyers announced today that they have traded defenseman Danny Syvret to the New York Rangers for forward Kris Newbury.

According to Michael Cignoli of the Saratogian, Newbury is the only AHL player to score 60+ points in the last three seasons. He is a 31 year-old centermen that has not made much of an impact at the NHL level (4 goals and 9 points in 132 games played), but with only one year remaining on a $600,000 contract, it doesn’t matter all that much.

I was a fan of Syvret even before he scored his first goal in the NHL Winter Classic against the Boston Bruins, but if the organization wasn’t willing to give him a call-up last season when half of the blue line was incapacitated, they never were. Moving Syvret allows the Phantoms to balance their blueline with Lauridsen, Manning, Mark Alt, Matt Konan, Cullen Eddy, Maxim Lamarche and (God willing) Bruno Gervais.

As long as the Flyers’ fourth line isn’t Newbury/Jay Rosehill/Zac Rinaldo, this trade is a reasonable depth move for the franchise.

How Concerned Should The Sixers Be Over Nerlens Noel’s Injury?

Brian Dawkins Shares His Love For The NFL With 2013 Rookies