Fred Shero to be Named to Hockey Hall of Fame 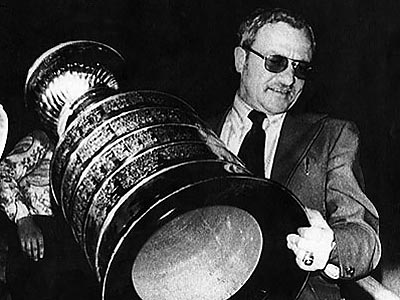 The Philadelphia Flyers organization gets criticized often these days for “living in the past” and over-celebrating the heroes of the 1975 and 1976 teams that brought Philadelphia its only Stanley Cup victories throughout its 46-year history.

One man that is often forgotten or left out when discussing the likes of Bobby Clarke and Bernie Parent is Fred Shero, the head coach of the two Cup-winning Flyers teams. After decades of being ignored by the Hockey Hall of Fame in spite of his many contributions to the NHL and the sport of hockey, the organization announced today that Shero will finally be inducted into the hallowed Hall.

Nobody seems to have an answer for why Shero, who passed away in 1990, had been snubbed for so long. It has been rumored that  some members of the Hall hated the way that Shero’s Flyers changed hockey into a more physical, bruising sport and held a grudge ever since.

Shero’s contributions extend beyond that of the first coach of an expansion era team to win the Cup, though. He was the first to utilize assistant coaches during games, the first to implement morning skates before games, and the first NHL coach to review how Russian teams played to incorporate aspects of their systems into his coaching.

Shero will be inducted under the “builder” category. A “builder” is defined as “a person who has contributed to the development of the game of hockey, and as the name refers, one who has built the game forward.” Ninety-eight men have been inducted under this category before Shero, including the first coach and later general manager of the Broad Street Bullies, Keith Allen, and Ed Snider.

As important as it is for the Philadelphia Flyers to continue adapting and moving forward in today’s NHL, it is a truly great moment for the team and its fans to celebrate one of the most influential men in its history.

Can Chip Kelly Keep His QB’s Healthy In The Read Option?

Fred Shero to those of us who were young and knew nothing of hockey but were suffering with 3 miserable teams at the time gave us life, happiness and hockey. Damn he should be the most beloved figure in Philly sports

Freddie “the fog” was something else as coach in those days. When the Red Army team was running roughshod through the best of the NHL teams in ’76 on thei 6-game NHL tour, the last team they had to face was the Flyers who won the Cup the year before. Even the mighty, rising Habs couldn’t beat them, but Freddie knew exactly how to stop that superb Russian team and defeat their offensive scheme which thoroughly frustrated them with an awesome Flyer TEAM defense…4-1, and the game wasn’t even as “close” as that score. That one game saved face for all those NHL office Canadian snobs (like Clarence Campbell) who hated the Flyers organization who singlehandedly brought new interest back to pro hockey and a new audience. The Flyers were the primary visiting team who always sold out arenas in other teams’ buildings. Finally the NHL wised up to Freddie’s cutting edge techniques and honored the man. “We will walk forever…”

Good post guys. I think that you may have hit on it Iggles in that the hockey community hated the Flyers and their brand of hockey. They wanted the traditional teams to win ignoring a brilliant hockey mind. This was long overdue.

Great Piece on a Great Coach and I wasn’t even aware that he wasn’t in the Hall of Fame after a long and winning Coaching Career.. Did he win another Stanley Cup with the Red Wings as a Coach ..

Good for Fred and good for us as fans. Damn shame they bypassed him all of those years and didn’t live to see the day. He was truly one of the greatest coaches of his time and probably the best coach in our city’s history.