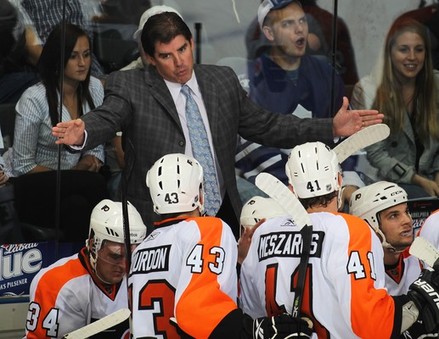 The following are a collection of short news pieces from the past week that affect the Philadelphia Flyers. To be on top of all local news, see here the USA Daily Journal news.

– The Flyers released their official training camp schedule, along with a series of fan-oriented festivities. Camp opens on Thursday, September 12 with the first preseason game taking place on the 15th in London, Ontario at the Budweiser Gardens. The team has played a preseason game at the Gardens every season since at least 2007, in no small part because Global Spectrum, the company that “officially” owns the Flyers, owns the Gardens as well.

The biggest change from camps past is that the team will relocate midway through to the Olympic facilities at Lake Placid, NY. The idea of taking the players away from their regular comforts and daily distractions to focus on the season ahead for a few days between preseason games is excellent. The “road trip” mentality should also provide opportunities for the players to better get to know their new teammates.

– I wrote a week and a half ago that the Flyers had not yet addressed the situations for restricted free agents Eric Wellwood and Brandon Manning.

“Whenever [Wellwood] signs, the Flyers will have to add another chunk of change to their already bloated salary cap or else place him on long-term injury reserve (LTIR), risking a penalty for the 2014-15 NHL season if they end up going over by season’s end.

Restricted free agents must sign NHL contracts by December 1. After that date, they are not eligible to play in the NHL for the rest of the season…

If the Flyers have an agreement in place with Wellwood to hold off on signing his contract (which raises another series of questions about circumvention), this scenario could easily play out after the New Year.”

Bill Meltzer of Hockeybuzz provided an update on the situation today. It seems they do have a special agreement in place- Wellwood has been signed to an AHL contract “for the time being” while he recuperates from an Achilles tendon injury. As long as isn’t signed to an NHL contract, the Flyers gain an extra contract space and salary cap space.

– Meltzer, arguably the best Flyers’ writer in the business, wrote in July that the organization was trying to help defensive prospect Fredric Larsson make the transition from Sweden to North America next fall. He reported that the likely destination was the Youngstown Phantoms of the USHL. Larsson confirmed the news today by stating via twitter that he is leaving for America tomorrow to join the team. Although the competition in the USHL may not be much better than the level he was leaving in Sweden, it will give the organization a better opportunity to follow his progress and for him to, again, begin the transition to North American hockey.

– Former Flyer Michael Leighton has signed with the Donetsk Donbass of the KHL. The new contract is reportedly worth $1.3 million. Donbass, based in the Ukraine, will be captained by Ruslan Fedotenko, who played with the club during the recent NHL lockout. Former Flyers defenseman Oskars Bartulis will also be a teammate.

– The Adirondack Phantoms announced the signing of 6′-6″ AHL defenseman Steven Delisle. Delisle has mostly played in the ECHL over the last two years, including this past season with the Flyers’ new ECHL affiliate the Greenville Road Warriors. Delisle’s relationship with the team is likely why he was signed. Considering the Phantoms’ blueline will already be crowded with the likes of Manning, Oliver Lauridsen, Matt Konan, Maxime Lamarche, Cullen Eddy, Zack Fitzgerald and likely one (or both) of Marc-Andre Bourdon and Bruno Gervais, Delisle will probably remain in Greenville, barring a “Homer at the Bat” series of misfortunes.

As the season draws closer, expect the regular updates to return.

Eagles Have Plenty Of Unanswered Questions