How Much Will The Eagles & Skins Run The Read Option This Monday Night? 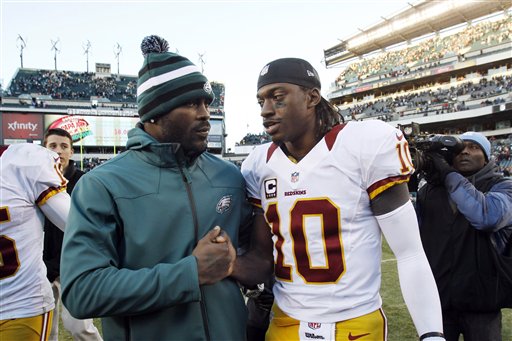 It’s that time of the year fellas.  Get ready for the NFL season to start on full blast.   The first game will be on Thursday night between the Broncos and the Ravens, check me out on 94-WIP after the game.

All of you Eagles fans who have been dreaming of the Birds being a running offense, well you’ve got your wish.  New head coach Chip Kelly has a lot of new ideas about how to win football games, but he’s old-fashioned in his love of the running game.  This football team will run the ball early and often.  Regardless of what is happening in the game, Kelly will never get away from his running game. Redskins head coach Mike Shanahan is much the same way, so both teams will be pounding it on the ground.

Next Monday night, the Eagles battle with the Redskins will give both teams a chance to work against themselves in a way.  Both Washington and Philadelphia will be utilizing a zone blocking attack and they’ll each have their quarterbacks executing the read option.  Shanahan has been utilizing the zone blocking scheme for decades now.  He and the Denver Broncos followed the blocking scheme to two Super Bowl titles in the 1990’s.

Last year, the Redskins had then rookie quarterback Robert Griffin III handing the ball off to then rookie running back Alfred Morris and they mixed up the inside and outside zone runs, along with the read option and ran all the way to the playoffs.   It was a dream season for the Skins, but it ended in a nightmare with Griffin going down with a severe knee injury.  He’s hurried back from the surgery, but hasn’t taken a snap in any of the preseason games.  He is on schedule to start on Monday night in front of the nation.

Nobody is sure about exactly how the Skins are going to use RGIII this season, after all the Eagles game will be his first live action since he went down in the playoffs against the Seahawks.  He says he’s ready to go, but the youngster has to be a bit rusty, since he hasn’t played in any of the games.

Will Shanahan cut back on the number of times he lets the second-year quarterback run the read option?  I think he will cut back dramatically on the number of times he lets Griffin carry the football.  Shanahan faced criticism last year when Griffin got hurt because many felt he shouldn’t have been out there in the first place, so I expect the Skins coaches to proceed cautiously.  The Eagles defense had better be ready for everything.

Kelly will have to make the same decision about how much to run the read option.  Michael Vick is a veteran quarterback, who can still run with the fastest of the league’s signal callers, but he’s been able to play only one full season in his career.  Kelly has a bevy of talented running backs in LeSean McCoy, Bryce Brown and Chris Polk, so he doesn’t have to ask Vick to carry the ball at all.  Still you expect to see some read options.

I expect Kelly to use the read option early and often, but he’ll tell Vick to take what the defense gives him.  He will try to get him to get on the ground when

I’m anxious to see if Vick will try to go back to his younger years of playing wide open “do whatever you’ve got to do to make a play” football?  It’s great for the fans and fun to watch, but he’ll be running the risk of turning the ball over or getting hurt every time he pulls the ball down and makes the mad dash for the end zone.

I think Vick should try to be “more Clark Kent and less Superman”.    If he can learn to execute the boring plays, it will make him a much better quarterback.  He should just run the offense as much as he can and get the ball out of his hands.  Vick should think about minimizing the risk of turnovers every time he touches the football.

I expect some of the defensive coordinators in the league to try to punish the quarterbacks, who run the read option, by pounding them whether they have the ball or not when they fake the handoff to the running back.  I expect them to tell their defensive players to hit the quarterback when he puts the ball into the stomach of the running backs.  If you hit the quarterback each and every time he either hands the football off or fakes the handoff, he will eventually be unable to take the pounding.

I will be interested in seeing what the NFL does if the read option quarterbacks start getting pounded.  We may find something out this Monday night when these two teams meet and their athletic quarterbacks get the chance to run the read option.  Each time one of these quarterbacks hands the ball off, keep an eye on whether they get hit or not.

It’s going to be a theme which will play out throughout the league for the entire season.