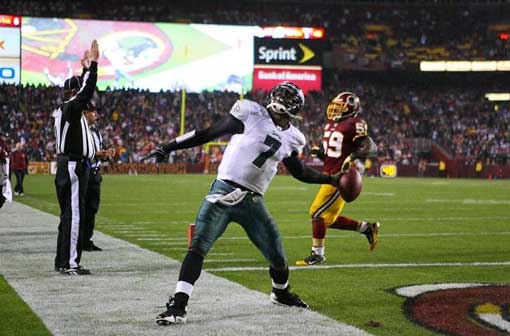 Kelly’s Offense As Electric As Advertised

Kelly’s offense was fast and efficient, and the Redskins were completely unprepared to defend it.

The element of surprise was with the Eagles in this game. Kelly had the Redskins completely off balance from the get-go. They moved the football at will, encountering very little defensive resistance along the way.

Kelly showed creativity and bravado throughout the night. On the team’s first possession, the head coach was faced with a 4th and 1 on the Washington 21. The first year head coach was not satisfied with the idea of settling for three, and opted to go for it with a successful four-yard running play.

Later in the first half, we got a taste of the unique formations that Kelly can bring to the table. The Eagles ran a play where Kelly split out offensive tackles Jason Peters and Lane Johnson wide and then handed the ball to LeSean McCoy for a nice gain.

Kelly leaned heavily on the running game, calling 49 runs to 25 passes. It was a run-pass ratio that would have been absolutely unheard of in the previous regime.

The offense ran 53 plays in the first half alone. They put up 26 points, and if not for the flukey backwards pass turnover, it could very easily have been a 33-0 game at the half.

The only thing more surprising than the dominant Eagles offense was how successful the Eagles’ defense was.

The heavily maligned unit did exactly what they needed to do to succeed. They were opportunistic, and took advantage of a rusty Robert Griffin.

The defense forced three turnovers, a safety, and didn’t allow a single point until late in the third quarter.

A performance like this is huge for this group. They were able to build up some confidence early, and then played with good intensity for the rest of the game. Instead of letting the Redskins push them around, they took the fight to Washington.

However, I think its important not to oversell what the defense did tonight. As a team, the Redskins were just bad tonight. And Robert Griffin clearly wasn’t 100%. The quarterback looked jittery and was ineffective throughout the night. He was overthrowing receivers, didn’t have explosiveness in his legs, and made some uncharacteristic mistakes. It was the first time that he had thrown multiple interceptions in a single game since high school.

Once the Eagles got off to their fast start, it forced Griffin to press even more than he already was, and the mistakes by running back Alfred Morris (who was responsible for a fumble and a safety) didn’t make things easier. The Redskins shot themselves in the foot repeatedly tonight, and to the Eagles’ credit, they took advantage of the situation.

As Griffin began to settle down later in the game, the Redskins’ offense had more success against the defense.

To say that I’ve been skeptical of the direction that the Eagles’ franchise has been headed in since the Chip Kelly hire is putting it very mildly. I wanted Gus Bradley, and was disappointed with the Kelly hire. I was not at all happy with how the Eagles settled for Billy Davis as the defensive coordinator. And I didn’t agree with the decision to bring Michael Vick back for another season. I didn’t give the Eagles much of a chance to win tonight, but they proved me dead wrong.

That skepticism is still there, but I was very impressed with how the Eagles looked tonight.

It was the most fun that I’ve had watching an Eagles game since the 2010 season. Tonight the Eagles looked like a team that was hungry, and had something to prove. They were electric on and off of the field. It was refreshing to see a football team that was organized, efficient, and fast. Even more refreshing was to see Kelly animated and energetic on the sidelines after 14 years of Andy Reid’s emotionless, blank stare.

Overall, I’ve still got my doubts about the team. I feel that the defensive performance was more of a product of the Redskins being that bad rather than the defense being that good. I still don’t believe that Vick is built to last as this team’s quarterback. And certainly you have to wait and see if defenses will be able to catch up to this offense or not.  But I came away from this game much more optimistic than ever about what Chip Kelly could possibly turn this team into several years from now. While my win outlook for the season remains low, the upcoming games promise to be as intriguing as ever.