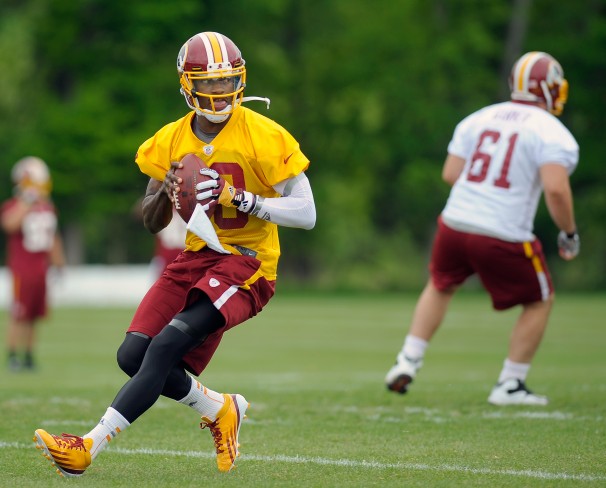 Is RG III Back?

The Washington Redskins are back in the NFC East picture.

After struggling heavily through the first six weeks of the season, Washington quarterback Robert Griffin III put on his best performance of the season, leading the Redskins to a 45-41 shootout win over the Chicago Bears.

Griffin looked like his old explosive self, accounting for over 380 yards of offense, including 84 on the ground. The Chicago Bears had no answer for the Washington attack, and Mike Shanahan’s offense finally looked like the team that surprised the league in 2012.

Are the Robert Griffin and the Redskins a serious threat again in the division? Absolutely.

The NFC East is as wide open as any division in football, and if the Washington offense has truly found themselves, then they’re as viable a contender as the Cowboys or Eagles. Even though the Chicago Bears are missing a couple of pieces on their defense, that’s still a very tough unit that shouldn’t play poorly enough to give up 45.

The problem for the Redskins is that their defense is still a mess. They gave up 41 points to the Bears, even though Jay Cutler was knocked out of the game in the first half. They allowed career backup Josh McCown to lead multiple scoring drives on them, and they just don’t appear to be close to an answer defensively anytime soon.

At 7-0, The Chiefs Stand Alone

Its just not fair.

Who would have thought that Kansas City would have gone nearly half of a season without once having to hear Andy Reid clear his throat and say “I’ve gotta do a better job”.

Instead, the Chiefs are 7-0. Despite having an offense that lacks any explosiveness and struggles to score more than 20 points a game, Andy Reid’s Kansas City Chiefs are the only unbeaten team in the NFL.

It’s all about Bob Sutton’s defense. That unit just won’t stop making plays. They sealed a one-point win over the Texans by forcing a turnover from Case Keenum on the final possession of the game.

The Injury Bug Claims Many Victims

A ton of notable players suffered serious injuries over the weekend.

Sam Bradford, Reggie Wayne, Leon Hall, and Brian Cushing were all lost for the season.

Doug Martin could be lost for the season with a torn labrum.

Jeremichael Finley of the Packers suffered a scary looking neck injury, and is out for an unknown period of time.

Jay Cutler and Lance Briggs are out at least a month each.

I can’t remember another weekend with so many notable names suffering significant injuries.

Report: Sixers’ Nerlens Noel Likely Out For The Season

Just in time for Songs to jump back on the wagon!

RG3 has been brutal this year, I would give the credit for his resurgence to Jordan Reed who is a match up nightmare — He looks like a young Dallas Clark

Just hear Vick will be starting this week against the Giants.

It has to be Mike Vick as I stated,
Foles will have to sit out this Week as mandated by the NFL since he was Diagnosed with a Concussion .. It’s Standard that he will be out at least 1 Week like Maclin and D-Jax were last Season
Barkely is not Ready to play in the NFL right now..
Chip Kelly will have to scheme and game plan differently and stay away from the read option since Vick won’t be 100% and have to relay more on being a “Pocket QB” which for a 12 Year Veteran, should be something he can do for the short-ter.. Vick should be 85% Health and be able to move around enough in the Pocket to deliver the Ball, but running the Read-option is not going to be an option, go with 2 Back Set in the Backfield
2 & 3 Te’s Sets and look to slow the Game down a tad and grind it out