Michael Vick Steps Out Of Way For Foles And The Team 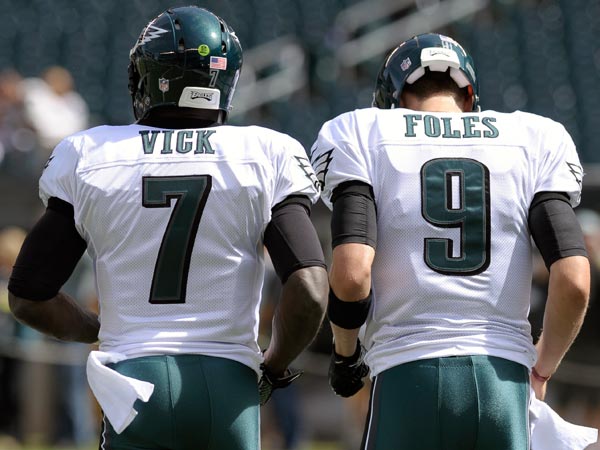 Eagles backup quarterback Michael Vick was on the other side of this type of decision earlier in his career with the Eagles.  Andy Reid made him the starter over Kevin Kolb a few years ago.  This time around it was the other way around with Chip Kelly giving him the news and Vick saw it coming.   The veteran quarterback could see the writing on the wall with Nick Foles leading the league in passing with 16 touchdowns and zero interceptions, so Vick graciously stepped out of the way.

“I see things before they happen,” Vick said. “You can’t be naive. You’ve got to understand the situation. You’ve got to see and just know that the most important thing for you to do is to try to be there to support your team.

“I didn’t want to make this a hard decision for coach. I didn’t want to make it a hard decision for anybody. For myself, I can’t be frustrated about it. I just wanted it to be a smooth transition and it was. Coach Kelly, when he sat down, he didn’t even have to say much. We’re always on the same page. You have to be that way with your head coach, especially at my age and with the time I’ve been in this game. It’s only right.”

Foles expressed admiration for the humility which Vick showed in stepping out of the way so that Kelly, Foles and the rest of the team would be in the best mindset to play the Arizona Cardinals.

“Mike’s been tremendous throughout this whole thing,” Foles said. “And Mike’s done so many things in this league. He’s such a great quarterback and still is.

“The best thing about Mike is he’s a great team player. He’s been nothing but helpful to me throughout this whole thing, whether it’s [with] me on the sidelines, maybe telling me what he sees out there.

“If there’s a time where composure is an issue we’ll just sit there and talk. And that’s what’s special about Mike. He’s just a good person, and how he’s approached this and just to see him being a team player throughout the whole thing, it’s been great for me to look up to an older guy and see how he’s handled this whole situation.”

“For him to come with the type of humility to just understand the situation, and to be a great leader, understand that it’s about the team, it’s not about his individual accolades, it takes a lot, man,” Eagles cornerback Cary Williams said. “I salute him for it. It’s something I’m going to put in my book for later on in life.”

Nick Foles Should Go To Riley Cooper And The Tight Ends

It is also reported that Vick has to been told to slow down with his charitable work. Its been stated that Vick does so much speaking to inter-city kids about how people can change their lives and do the right thing that the Eagles have to slow him down at times. Vick is positioning himself to be the Eagles backup moving forward. I guess we can put to rest the lies from the Vick haters about how he doesn’t help Foles. Its now been documented what a tremendous teammate and help he is to Foles.Moving forward a veteran backup is a must for this team unless you feel comfortable with a Case Keenum, Matt Flynn or Matt Barkley type of backup. A 2 year deal in a backup role for Vick would be a great comfort moving forward. I don’t know what else Vick can do or say to prove he has truly changed. I for one am not perfect and made many mistakes.Vick has done more good and delivered a positive message to more people than any of us could imagine. Good for you MV7 keep up the good work you know people will always be watching you.

You know whats funny, Vick has never been caught in a car being “serviced” by a prostitute. Vick has never spit on a kid, Vick has never thrown someone through a glass window. Yet Barkley is all over the TV and loved by many. Just doesn’t make sense. lol

Mike Vick is really a good person. I’ve gone from not wanting him on my team (when we signed him a few years ago), to really admiring him as a man. I believe in second chances, and I hoped he’d get another shot in the NFL when he got out of prison. He’s really changed his life. He’s a great teammate and is great for the community. People can learn from him. He is humble, and he is honorable (I love the fact he has paid back his debts instead of filing for the type of bankrupsy where you dont pay back). I’m very happy he is an Eagle, and I’m proud that he is a Philadelphian now. Mike Vick is a true leader.

I like you Dag, but you’re silly to beleive Vick is going to sign on to be Philly’s backup. Unless Philly plans on making him the highest paid backup QB in the league.

Vick is biding his time and will make a move to be a starter somewhere. His injury history will make that difficult – but I can see a couple of teams that are built to win now, except for their QB situation take a flyer on him.

Dude is competitive to his core…he’s not signing up to sit behind anyone. I bet he retires first before he SIGNS up to be a backup. Not going to happen.

every big dogs knows when it’s time to move over for another big dog, plus Vick likes it in philly, and he will not retire and leave millions on the table he and his family needs

his only incentive to leave is if he gets offered more money somewhere else, which might, might not happen, but I believe he still is in the eagles plans for next year, or at least in the thought process, especially without a viable back up in Barkley

He was probably crying for joy. Realizing his 1 day game check is more money than you will make in 20 years at your job. lol

Eagles0superbowls huh. and you post like a fan……. If I wasn’t at work I would call you what you truely are. GET OFF OUR SITE EAGLES0SUPERBOWLS….. Prick!

My hats off to Vick to handling everything with Class,Respect
And Dignity.. He will need to stay focused and sharp though for You never know when your number will be called..
The Catdinals and Lions both have very Physical DL and will cone after the QB and Foles, so stay engaged Mike Vick, the Team may need you you to win a game or two during this final 5 game stretch ..

Well I guess this lays to rest the selfish me first guy who people on this site who’s never met the man has labeled him to be. Guess what Vick haters even if it’s an act. He’s still smart enough to position himself into another opportunity somewhere in the league. LOL but he’s a stupid thug right? Hahaha.

One more thing maybe just maybe the reason why his teammates and other guys around the league look up to and respect him has nothing to do with just his skills. Sounds like his biggest fan in the room is Nick Foles. I’ve pointed this out numerous times on this site we have these ridiculous arguments on this site and these two guys are best friends who are great teammates and the locker room loves both of these guys.

I dont think it is an act. I think he embraced his second chance and really changed his life for the better. He probably eliminated some of the poor influences on his life, and embraced family, football, faith and community. You have to admire someone who can admit wrong, and then change his life in actions more than words. Michael Vick has my respect.

He’ll sign with the team that offers the most $$.

Gotta pay for his cars.