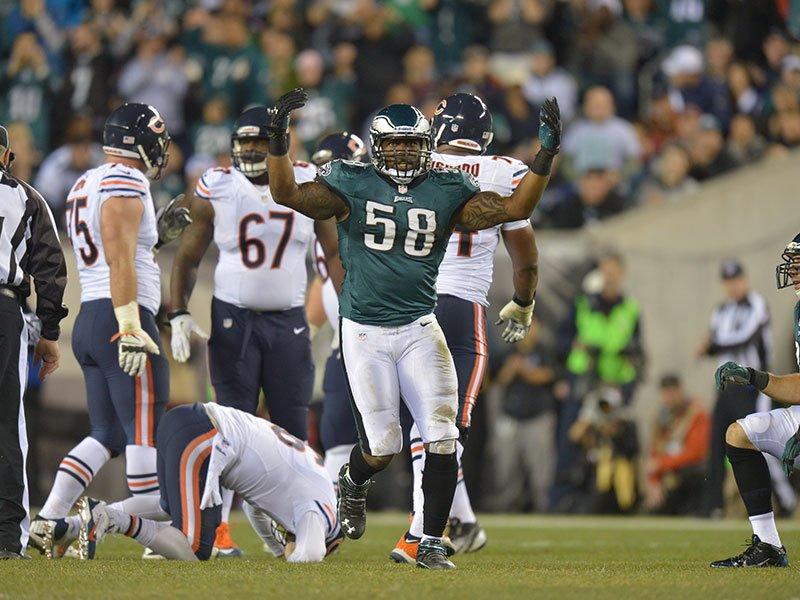 The key to the game last night was the play of the Eagles defensive front.  The defense held an outstanding Chicago offense to only 11 points because the guys in the midnight green seemed to want the win more than the Bears.  The Birds defensive front dominated the battle with the Chicago offensive line and put a pounding on Bears quarterback Jay Cutler, who lacks the toughness and competitiveness to a be a premiere NFL quarterback.

Once Trent Cole, Mychal Kendricks, Cedric Thornton and company got finished with him, Cutler had quit.  He seemed disinterested and started sulking and complaining about the play of his offensive line.  The guy plays the game without the fight and heart of a winner, when is hit.

It was a dominating performance by the entire Eagles defense.  Cole played like a man on a mission as he contributed three sacks and his outstanding effort was the key.  On one of the sacks, he ran over Chicago running back Matt Forte.   On another he beat the tackle then hurled himself over Thornton to trip up Cutler.

Kendricks was just as driven as he contributed two quarterback sacks and five total tackles.  He did a great job of shuffling behind the defensive line and attacking the ball carriers before they could get going.  He’s learning how to use his quickness to be the big play linebacker they need him to be.

The strong-armed Bears quarterback was sacked five times and picked off once by nickel back Brandon Boykin, who took the interception back 54 yards for a touchdown.  He completed 20 of 35 throws for 222 yards and one touchdown pass.  Chicago converted only 5 out of 14 3rd down opportunities and most of those were on their one scoring drive.

Running back Matt Forte gained only 29 yards on nine carries for only 3.2 yards per carry.  He was tripped up by Thornton in the end zone for a safety in the second half, which is an embarrassment to Forte and his offensive line.  The Bears rushed for a total of only 61 yards.

The Birds cornerbacks Bradley Fletcher and Cary Williams showed their attitude first last night on the kickoff team, when Fletcher ripped the football out of Devin Hester’s arms and Williams recovered to help put the Eagles up by two touchdowns before the Bears offense even got onto the field.  The cornerbacks  had been challenged by the defensive coaching staff to move up in press technique and cover the Bears outstanding wide receiver combination of Brandon Marshall and Alshon Jeffery.  They took them out of the game.  Marshall caught four passes for only 36 yards and Jeffery caught six passes for 76 yards.  They out-physicalled the biggest set of receivers in the NFL.

The talented wide outs were jammed at the line of scrimmage and harassed as they went downfield.   Fletcher led the team with seven tackles and Williams had four stops with two pass breakups.

This is all great but if they can’t come up with a similar performance against Dallas, they will go home next week.  This great, dominating defensive effort will only mean something, if they show with just as much fire against the Cowboys.