Eagles Get It Done And Capture NFC East Division Championship 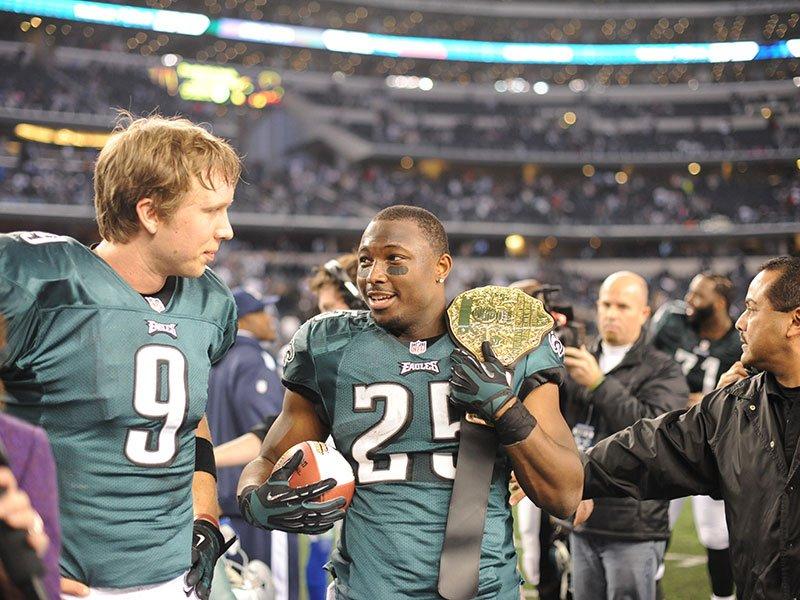 For the first time since 2010 the Philadelphia Eagles are atop the NFC East and headed to the playoffs. On Saturday the Eagles will host the New Orleans Saints at Lincoln Financial Field at 8:00 PM. The win against the Dallas Cowboys on Sunday Night Football was undoubtedly a team effort but it was the 2012 draft class that helped clinch the division and send the Eagles to the playoffs.

Nick Foles, adding to his already incredible season, threw for 263 yards on 17-of-26 passing while also tossing a pair of touchdowns, bringing his season total to 27. Since taking over for Michael Vick in October, Foles led the Eagles to an 8-2 record as a starter while breaking numerous franchise and league records. All of that would have been meaningless if the 2012 third round pick didn’t deliver in Dallas. The biggest game of Foles’ young career did not come clear of any blemishes. A costly fumble came on a sack in which Foles held the ball for too long and took a sack.

“I know my guys have my back,” said Foles, postgame. “I fumbled and the first thing [linebacker] DeMeco [Ryans] said is ‘We got you. We got you.’”

Nick Foles made the throws when he needed to and made a smart play when he couldn’t find anyone open late in the fourth quarter and slid down inbounds, killing a few more seconds of clock and giving the Cowboys just 120 seconds to win the game, something Brandon Boykin eliminated any hopes of very early (we’ll get to that later).

The defense certainly stepped up in times of need and Mychal Kendricks was arguably the defensive MVP. Kendricks, a second round pick from the 2012 NFL Draft, tallied 12 tackles and forced a pair of turnovers that came at important times. On the opening possession for the Cowboys the ball was driven deep into Eagles territory and the Cowboys were on their way to an early lead. However, Kendricks made a perfect play on the ball and forced Cowboys running back DeMarco Murray to cough up the football, right into the waiting arms of cornerback Bradley Fletcher.

In the second quarter, Kendricks was the recipient of yet another lucky bounce. After a poorly thrown ball by Kyle Orton that handcuffed Jason Witten, a ball thrown behind the tight end slipped through his hands and into the arms of the second-year linebacker. The turnover led to two quick plays on passes to Brent Celek and seven points for the Eagles offense, a ten-point lead.

The ball rarely got past Kendricks who was a heat-seeking missile for the ball carrier. However, when it did, Brandon Boykin was often the one waiting to make a big play on the ball. Boykin was not thrown at a lot but when he was, he shut it down. As a nickel corner, the Georgia grad and fourth round pick in 2012, Boykin played a huge role in the win-or-go-home season finale. In the third quarter, the Eagles brought a jailbreak blitz on Orton who was barely able to lob the ball into the endzone. Outsized and over-matched, Boykin made a great play on a ball intended for Dez Bryant and batted the ball away. The Cowboys then settled for a field goal, the four point difference would have given the Cowboys the win.

To finish the game, number 22 made one of the best undercuts you will ever see. “I knew they were trying to open up the middle,” said Boykin. “I undercut it at the last second and made the play.” The play, of course, was on the final chance that the Cowboys had to put a drive together and erase the two-point lead the Eagles had. However, on a ball that was thrown slightly behind Miles Austin, Boykin made his break and intercepted the ball to secure the victory and a playoff berth for Philadelphia.

Bryce Brown, another 2012 draft pick, scored a fourth quarter touchdown that ended up being the deciding score and the Eagles victory points. Chris Polk, a 2012 rookie free agent signing, offered a 34-yard reception on his only touch of the game. Clearly, the 2012 rookie class played a huge role for the Eagles in the NFC East Championship game.

Nick Foles and Brandon Boykin were both clear, as the team has been all year, that the team has 24 hours to enjoy the win and then preparation begins for the New Orleans Saints and the high-flying, Drew Brees-led offense.

“We have to rise to the occasion,” said Boykin. “And we definitely will.”

Like I Expected, The Cowboys Are Featuring DeMarco Murray

The Turnovers Decided This Eagles-Cowboys Game