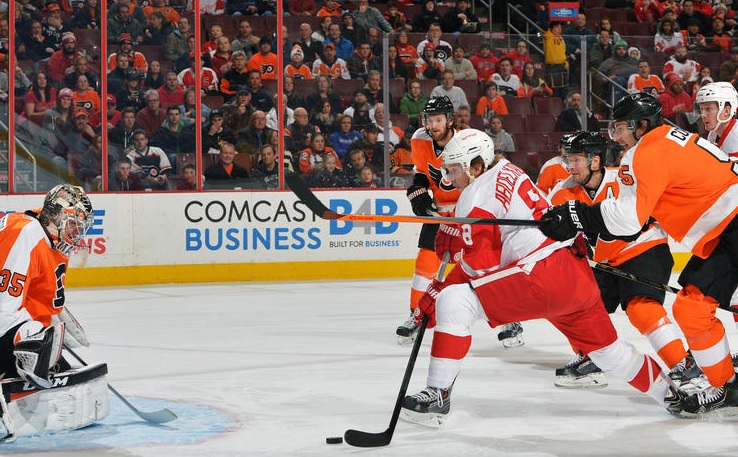 Claude Giroux called Saturday’s 6-1 loss to the Boston Bruins “the most embarrassing game I’ve been involved with.”

The Philadelphia Flyers seemingly lost every battle along the boards and were unable to sustain offensive pressure for more than 10 minutes of the game. It marked their third loss in a row, with a meager five goals of support in that span.

Seven points separate 4th place and 15th place in the Eastern Conference. With the wild card of the Winter Olympics looming in the distance, gaining ground against opponents is absolutely critical at this time of the season.

It is with all this in consideration that tonight’s 5-0 defeat of the Detroit Red Wings couldn’t have come at a better time.

Goaltender Steve Mason has been pulled three times in the last two weeks. How much of that is his fault and how much the team playing in front is debatable, but the Red Wings- even without Pavel Datsyuk or Henrik Zetterberg- are still an above average hockey club.

Mason was tested early when the team became hemmed in their own zone, but was able to shake off the attack and stay focused for the duration. He remained active with his glove hand and helped slow the game down when necessary. He would ultimately turn away 34 shots for his second shutout of the season.

Head coach Craig Berube decided to mix up his lines again, returning to some familiar combinations that provided excellent balance. Scott Hartnell remained with Claude Giroux and Jake Voracek while Steve Downie, a recent healthy scratch, returned to the third line with Sean Couturier and Matt Read. Michael Raffl bumped down to the fourth line with Chris Vandevelde and Adam Hall.

Between these lines, Scott Hartnell (2), Claude Giroux, Sean Couturier and Adam Hall (!) all contributed to the Flyers’ win. This was the first time all season that the Flyers did not have one of Zac Rinaldo or Jay Rosehill in the line-up, and with all due respect to the two pugilists, the team will be better off if it can maintain this line-up.

The defense still looked suspect at times, but were able to reduce the number of turnovers giving heartburn to Mason (including a final minute head scratcher from Nicklas Grossmann that led to a breakaway).

Kimmo Timonen did not play in the final eight minutes of the second period nor any of the third period after blocking a shot. The team announced that he had a “lower body injury,” though Dave Strehle of The Fourth Period is reporting he will be reevaluated tomorrow and that the team doesn’t think it’s serious.

Penalties once again remained an issue, as the Red Wings received four powerplay opportunities (excluding 4-on-4’s). If not for some stellar penalty killing from Couturier and Raffl, the outcome of the game may have been less than favorable in comparison.

The Flyers continue their stretch of difficult match-ups on Thursday with the first leg of a a three-game Western Conference road trip. They will need to continue every positive development from this game if they have hopes of gaining traction against the Anaheim Ducks, Los Angeles Kings and San Jose Sharks.