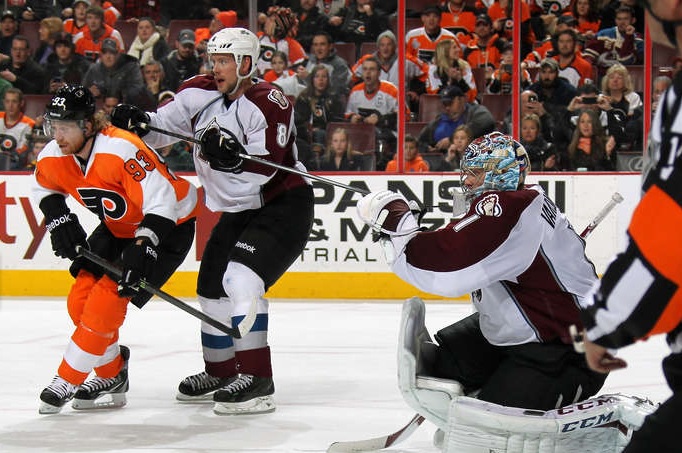 The lopsided 6-1 loss at the hands of the Boston Bruins that seemed to magnify all of the Philadelphia Flyers’ defensive issues took place less than two weeks ago, but you’d be forgiven if you’ve already forgotten it.

Bill Meltzer of HockeyBuzz has described the NHL season in the past as a series of “ebbs and flows,” and it’s an apt portrayal of how this particular season has played out to date. The Boston game was the culmination of bad habits snowballing into major mistakes that saw the Flyers spiral into a four game losing streak, but since that Saturday, the Flyers have only lost once- to the #1 ranked Anaheim Ducks.

They have now won four of their last five games, including Thursday night’s 3-1 resounding defeat of the Colorado Avalanche.

The first period was characterized by powerplays for both teams that dampened any momentum in either direction. A dangerous looking hit from fourth liner Patrick Bordeleau on Brayden Schenn resulted in a five minute powerplay for Philadelphia (as well as Bordeleau’s ejection) towards the end of the period, but a hooking call on Wayne Simmonds early in the second period dampened its effectiveness.

The Flyers’ powerplay looked sharp on the first man advantage, but the team had difficulty setting up in the offensive zone on subsequent attempts. One can only fault the powerplay so much, though- Mark Streit finally capitalized at the 6:21 mark of the second period. It was their eighth consecutive game with a powerplay goal, helping further cement the Flyers as the 8th best powerplay in the NHL.

It’s also worth noting that the Flyers are the 2nd worst team in shorthanded goals against, and nearly let up a goal to Matt Duchene on their third powerplay.

If the play of the first period was choppy, the Flyers absolutely dominated in the second. The Flyers outshot the Avalance 17-8 and successfully rolled out all four lines.

“I think the first period was just a little tighter checking. Not a lot of shots,” said head coach Craig Berube in the post-game press conference.

“I think the first part of the first period, there were a lot of powerplays too. It kind of screws up the momentum of the game a little bit, but the second period I thought we really played a good game in the offensive zone. Got a lot of shots on net. Did a lot of good cycling, and then they did that to us in the third.”

The script reversed in the third period, as the Avalanche outshot the Flyers 17-6 in the final twenty minutes. It didn’t seem that the Flyers “let their foot off the gas pedal” as much as Colorado began to utilize their speed more to exploit the Flyers’ blue line.

Michael Raffl tallied his seventh goal of the season to pad the Flyers lead seven minutes into the third period. Sean Couturier battled along the boards behind the net and passed the puck back to Raffl, on his way to the crease at the right time. Raffl played largely on the fourth line, but I wouldn’t be surprised if he and Steve Downie switched places for the next game.

The Avalanche were able to get on the boards late in the third period after head coach Patrick Roy elected to pull goaltender Semyon Varlamov with nearly four minutes left to play. The final minutes of the period were nail biters, but some hard work between Wayne Simmonds and Claude Giroux resulted in an empty net goal for the captain to seal the win.

The #1 star of the game was awarded to goaltender Steve Mason, who stopped 38 of 39 shots for the win. Mason and Varlamov both played fantastic games in net, but Mason had the added difficulty of cramps and dehydration that began late in the second period.

Mason looked questionable for finishing the game, but grinded out the win. It’s likely that Berube will turn to Ray Emery for Saturday’s matinee game against the Calgary Flames, giving his starter some additional days off along with the Olympic break to rest up for the home stretch.

The season is “flowing” at just the right time. The Flyers can only hope that the Olympic break does not disrupt it.