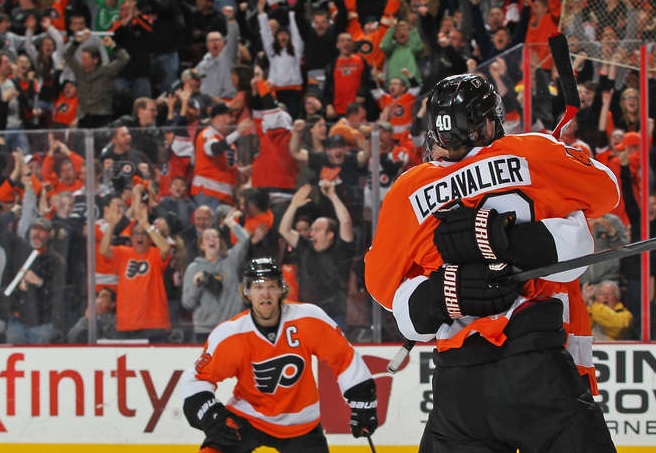 The Philadelphia Flyers’ signing of Vinny Lecavalier in the 2013 NHL offseason came as a surprise when it was announced, but the transaction made sense on paper.

The Flyers were buying out the remainder of veteran centerman Danny Briere’s contract, and would otherwise have to rely on 22-year-old Brayden Schenn to shoulder the responsibilities of centering the second line. Schenn had split time between the center and right wing positions for much of his time with the Flyers to date, with coaching staff using him primarily as the latter.

The loss of Briere wouldn’t create a complete vacuum in leadership, but it would certainly remove one of the locker room’s trusted voices.

As with most things Flyers, the only caveat was that to lure Lecavalier to Philadelphia after he was unceremoniously bought out himself by the Tampa Bay Lightning, they would have to sign him to a less-than-ideal contract.

Lecavalier was the lone bright spot during the first fifteen games of the season, when the Flyers looked as if they’d be competing for the first overall pick in the NHL Entry Draft instead of Lord Stanley’s Cup. Through a 3-10-1 record (and a back injury), Lecavalier tallied 5 goals and 7 points.

As the rest of the team finally began to elevate their respective play to what many had expected in October (beginning with a Saturday matinee victory of the Edmonton Oilers in early November), Lecavalier’s production steadily dropped.

If you buy into advanced statistics at all, work by others such as Collin Mehalick at BroadStreetHockey suggested that Lecavalier was dragging his linemates’ shooting differential (“Corsi”) down, regardless of the line he was playing on.

It didn’t help matters that head coach Craig Berube was trying to utilize Lecavalier as a winger instead of a centerman, finally feeling comfortable with Brayden Schenn as the second line center for the foreseeable future.

Ahead of last Friday’s game against the Toronto Maple Leafs, Berube “demoted” Lecavalier to the fourth line. From the outside, it appeared to be a desperation move when you have a player that you can’t use but, for salary reasons, are forced to play him.

It became clear after both the regulation win over the Leafs and Sunday afternoon’s shootout loss to the Boston Bruins that there is much more going on with the move, to both Lecavalier’s and the Flyers’ benefit.

As mentioned earlier, Lecavalier is a natural centerman. Putting him in a position where he can play his best hockey works best for everyone.

While the fourth line is normally limited to under eight minutes of ice time, Berube has been using the fourth line much more often to balance the minutes across each line. Having the depth that Lecavalier brings as a pure goal scorer on the fourth line creates match-up problems for other coaches while allowing his other plays to gain valuable rest at a time when there are games virtually every other day.

Lecavalier remained on the second powerplay unit for each game, where he scored the first goal of the game on Friday during a five-on-three.

On Sunday, Lecavalier tallied his 400th NHL goal with an assist from linemate Adam Hall. When the Flyers were down 3-2 heading into the third period, Berube switched up his lines again and moved Tye McGinn down to the fourth line while moving Lecavalier back up to the second line- as a center.

The move paid off, as Lecavalier was flying all over the ice, finally tallying the game tying goal with 24 seconds left and with the goalie pulled.

There was much criticism with regards to Berube’s hiring just three games into the season, but the players have bought into his system and respond well to his coaching. Handling a veteran player that is arguably on the decline of his career is never an easy situation, but Berube has managed to find ways to utilize #40 that respect him as a player and actually make the team better.

The Flyers are currently two points behind the New York Rangers in the standings, with just five points separating them from the 9th place Washington Capitals. Only eight games remain in the regular season, and it is critical that the Flyers win the majority of them to punch their ticket to the post-season.

As long as Berube continues to find ways to motivate his players and balance the lines, this may actually be achievable. Who would have thought that in early November?

Projections For The 2014 Phillies