MSG Loss Streak Ends as Flyers Even Up Series 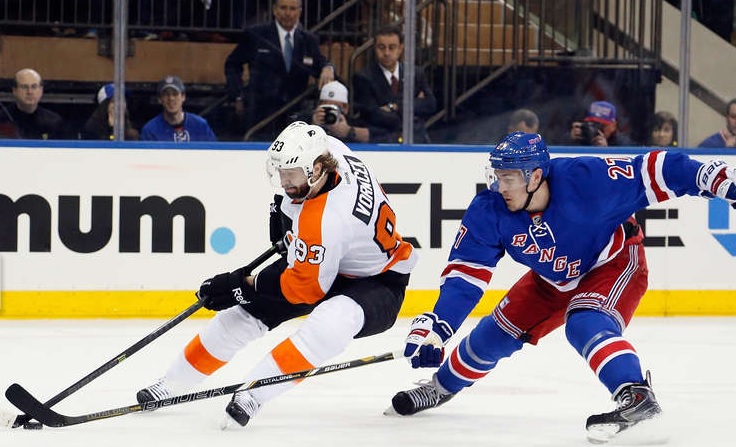 Madison Square Garden has not been kind to the Philadelphia Flyers over the last few seasons.

The Flyers’ futility against the New York Rangers while on the road has been noted in many a first round analysis. Considering that the team has not registered a win at MSG since February 20, 2011, expecting the Flyers to wrap up this series in four games was unlikely.

Splitting the first two games was arguably the most optimistic outcome, and following a lukewarm first game against the Blueshirts, the Flyers have evened up the series 1-1 thanks to a solid 4-2 win on Sunday afternoon.

The first period played out as a continuation of Game One, with the Rangers grabbing an early 2-0 lead from Martin St. Louis and Benoit Pouliot. Pouliot scored his goal on a powerplay in the first ten minutes of the game, and it wasn’t even the Flyers’ first penalty.

Credit the team for not panicking while facing a 2-0 hole. It’s an unfortunate position that they’ve been in far too often this season, but the benefit is that they’ve developed the confidence as a group to not wilt at the onset of adversity.

Jake Voracek put the Flyers on the board at the 14:14 mark of the first, blowing past the Rangers defense and sliding the puck past goaltender Henrik Lundqvist as he muscled his way past the crease. The Flyers have not had much success with their breakouts from the defensive zone, but the top line was able to move the puck deep from the Flyers’ zone from Claude Giroux to Scott Hartnell to Voracek to start the counter rush.

Entering the second period down by just a goal, the Flyers played like a team reinvigorated. An early interference penalty to Rangers defenseman Anton Stralman allowed the Flyers an opportunity to even the score, and they did not disappoint.

In spite of his unfortunate penalty in Game One, head coach Craig Berube kept rookie Jason Akeson in the line-up and inserted him on the second powerplay unit. Akeson rewarded Berube’s faith by wristing a rebound from up close past Lundqvist for the tying goal.

The game winning goal came from Luke Schenn, who was keen enough to jump into the offensive zone on a delayed penalty call. Trailing the play, Schenn skated close enough to backhand a rebound shot over Lundqvist’s glove.

Wayne Simmonds sealed the Rangers’ fate with an empty net goal after pulling nearly half the Blueshirts with him. It was a brilliant effort on what was otherwise a nerve-wracking third period.

The Flyers may have lost the shot battle when the final buzzer sounded, but the offense that was stymied in Game One had a much better zone presence in Game Two. The Rangers blocked 22 shots to the Flyers’ 13, with the final shot totals being fairly close.

Ray Emery stopped 31 of 33 shots for the win. He appeared to play much deeper in net for Game Two, perhaps expecting the Rangers to try more east-west plays rather than beat him one-on-one. It may not be the safest strategy for the remainder of the series, but it worked well today.

Emery has played well enough that the team likely doesn’t feel pressure to rush goaltender Steve Mason back if he isn’t 100%. Returning to Philadelphia with a clean slate should help ease concerns as well.

The Flyers have Monday off before returning to the ice on Tuesday night at the Wells Fargo Center. In addition to continuing their good habits from Game Two, they still need to drastically reduce the number of penalties they earn. Through two playoff games, they’ve collected 32 minutes of penalties.

That’s enough for one series, let alone two games. Tuesday’s a good a day as any to form new habits.

Notes From The Phillies’ 10-9 Win Over Colorado