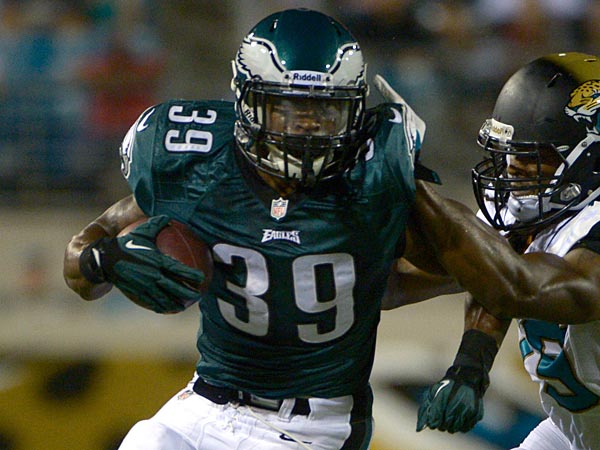 As of early Sunday evening, the Eagles have signed eight players to their practice squad.

Matthew Tucker is the most noteworthy name of those on the squad. Tucker played well enough to earn a roster spot in the preseason, but the Eagles decided to keep three running backs instead of four.

Also of note is that running back Henry Josey has signed with Gus Bradley and the Jacksonville Jaguars, who face the Eagles exactly one week from today.

Several other ex-Eagles have found new homes as well since being released. Defensive end Alejandro Villaneuva has caught on with the Steelers. Andy Reid and the Chiefs claimed defensive tackle Damion Square. And the Houston Texans picked up wide receiver Damaris Johnson.

The Eagles still have two spots open on the squad. It wouldn’t surprise me to see one of those spots filled by G.J. Kinne, and the other spot going to a player released from another team.

Going to miss Josey. Hope he plays well – except for next week, but doubt he dresses (assuming he makes the team).

Here what I don’t understand…
What happens next week if Polk is not ready to go,
Which he hasn’t even practiced since July 28th,
So what kind of game shape is he even in…
You can’t go into a Season or a NFL game for that matter with only 2 Healthy RB’s… What happens if McCoy or Sprole’s get injured?
Why didn’t the Eagles Place Polk on short-term IR giving him
4 weeks to get 100% healthy and ready and have sticker as the 3rd RB…
Chances are that Polk still isn’t ready next Sunday and then what the Eagles… Call up Tucker this week and activate meaning someone else has to go from Active 53 Man Roster… Stupid, Stupid Roster move to Start the Season….
This ? should be asked to Kelly & Roseman tomorrow by the media..
You have to go into any NFL Game with 3 Healthy RB’s..
And right now the Eagles have 2
Polk will not be fit for Play for at least 3 weeks so why not
Place him on the shirt-term IR list instead of wasting a Roster Spot &
transaction to start the Season..,

Tucker- if not called up due to lack of need will not accrue another season of NFL service and therefore be PS eligible next year as well- So will Barner off of IR I believe. This allows for depth that is familiar with the system but not eating up needed roster space.

If they had placed polk on the designated to return IR he would be unavailable till week 6 and Tucker would have had an accrued NFL season.

I would rather have polk in week 2 or three than tucker.

Polk hasn’t seen live Action versus an opponent since last January,
Why bother taking a risk and rushing him back since he obviously won’t be football game ready in 2 weeks time, so he sits out to Week #6
Tucker has proved this Summer he can handle his duties..

Relax it’s a practice squad. You can add and drop guys all the time. I told you that to say this.

Bring in Stephen Hill (former Buttfumble target) He is fast and Tall and maybe chip can be the Football Whisperer and give him some mojo like he did for the sanchize.

So if Polk is a no go for Jaguars, then Eaglez call up Tucker
To Active Roster, then who goes?

You play only 2 RB because you have Burton and Huff that can fill in should you lose Shady and Sproles. At that point its kinda whatever any way.

Burton can take Polk’s spot on the 46 if he is not ready.

Paulman- If we need our third RB in the first 2 weeks or so… I mean NEED not want we have ISSUES.

The answer (half sarcastic)- Sign Micheal Zordich Jr to the PS and rock a FB. (LOL)

And if McCoy twists an Allen, your F’d in the first game vs the Jaguars
Smart move Chip & Howie…
Or if Sproles takes a hit to the head on Punt Return
Why not plan for these situations right from the start and have 3 Healthy
RB’s to Start the Season….

Dude Relax- We could always drop Barkley and promote Tucker.

Burton is the key in that situation- He is your guy anyway so you should be able to relax. ( I love a swiss army knife as the 50+ man on the team as well)

Burton CANNOT play at the NFL level!!!!!! He is NOT a RB or TE or WR or QB…..he is garbage PERIOD. He makes the active roster I will NOT have any faith in this regime anymore. The guy is a Tebow clone, good at nothing but bc he played at Fla he must be able to do something or so they think.

For emergency spot duty he will be fine. Have you seen our o-line? Average players can use our line to look good. BURTON IS A BACK up but at multiple positions… Get the idea..we should hope not to see him except maybe on special teams. But if need arises he offers back up value for the roster spot he tskes

I imagine Polk is closer to ready than we know. In fact I think they made the decision to keep him and held him out of the Jets game. Both Josey and Tucker looked great in the Jets game and both got cut.

The point is that he hasn’t even practiced in over a month,
How effective could he be in the first 2-3 Games..
He’ll he hasn’t been hit, play special Teams or played football in
5 weeks… Should have short-term IR ,
That why you have it and the Eagles should have used this option
Hand Tucker as the 3rd RB to start the Season then is nothing to worry about
For the Start of the Season
If they call up Tucker this week, then have to release a Player to make room
(let’s say Trey Burton or J Watkins or T Hart)
Then these guys could be scooped up by another Team as they would to clear waivers first… My point being that none of this was necessary if they just parked Polk on Short-Term list to begin with and you take all of these other scenarios out of Play.. A big gaffe by Kelly & Roseman
Do you want to carry Polk for 2 Weeks on your Roster if he’s unable to play?
You need 3 Healthy RB’s for an NFL Game and not 2!!!

In other news….I see a new cult has formed in WACO that has gotten response from Washington… RGIII has a statue erected in his honor. I don;t know who is the bigger tool RGII or Baylor’s Decision Maker that signed off on that.

RGIII not RGII although I think it may apply there as well from reports I read.

It’s not news… RG3 helped Baylor put their Football on the Map so good for them and him….

You do that when he is an old man. Too much too soon and again we see why he has no teeth from all the sweets he has been fed (metaphorically)

****NFL News*****
KC Chiefs announce a new 4 Year Deal with QB Alex Smith
Worth $68 Million with $45 Million in Guaranteed $$$
Which averages to $17 Per Season….
Nick Foles Agent and his new Wife have to be very happy…

Vegas now has Eagles as only a 1pt Favorite
Due to this Roster Foul up by Chip Kelly..

The roster foul up was keeping Burton! That was just as bad as keeping Matthews.

You do realize he (Channeled Al Bundy) Scored 6 touchdowns in one game once right. I mean it’s not like he just started playing football yesterday.

When you can have a player(s) at the back end of the roster that can back up multiple spots – TAZR (Tailback and Z and R receiver) Plus contribute on special teams you get your perfect 46th man.

Problem is Burton CANNOT play at a NFL level at any of those positions. 80% of the league can probably play more then the position they are playing but that doesn’t mean they can play the other positions well.

He went undrafted for a reason. He passed through waivers, so clearly no one thought he was very good. He will NOT be in the league by the end of next season. Mark my words.

He is wasting a roster spot that could be used on someone who can HELP this team.