Kurt Warner Tells Us The Whole Truth About Sam Bradford 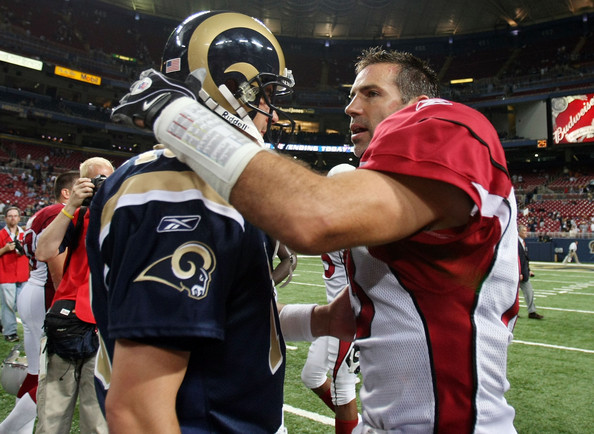 Eagles offensive coordinator, Pat Shurmur was also Sam Bradford’s offensive coordinator when he came into the league.  He told us part of the truth about Bradford.  He told us the positive side, which focused on his potential, but he didn’t tell us the whole truth.  It’s understandable.  Shurmur’s job then and his job now is to gain the confidence of Bradford, so that he has his trust.

Bradford’s former head coach Steve Spagnuolo, who is again the New York Giants defensive coordinator gave us part of the truth about Bradford and he too gave his potential.  You knew Spagnuolo wasn’t going to say anything negative about Bradford because he’s not the kind of guy that’s going to verbally attack a youngster, whom he likes and wants nothing but the best for in his future.  Plus his Giants defense will be battling Bradford two times in the upcoming season.

Thankfully we finally found former Pro Bowl and Super Bowl winning quarterback Kurt Warner, an expert who closely watched Bradford during his five years in St. Louis and he gives us the whole truth about Bradford.  Warner likes the youngster and tells us that in the interview, but he comes totally clean on what happened the youngster during his time in St. Louis, then he tells us how it affected him.  He finishes his comments on Bradford by telling us what he’s going to need to do to overcome the challenges he’s facing.

Everybody else talks about Bradford’s knees and the two ACL tears which he sustained over the last two seasons, but that’s not the only thing that’s been damaged during his five years in the National Football League.  Nobody knows about what the battles that go on in the mind of a NFL quarterback than somebody who has played the position and played it at the highest of levels.

“I love Sam”, Warner said to PhiladelphiaEagles.com’s Chris McPherson.  “Great young man.  A guy  that I believe who wants to be great.  I believe he’s got the tools to be great.”

“I think the biggest thing that I have seen with Sam in his short career is that I want to see him get the confidence back that he believes he can make every throw on the football field.  I think there was a time in St. Louis where he got to the point where he was more afraid to make a mistake than to make a play.  He managed games instead of playing up to his potential.  I believe if he plays up to his potential he can be a really good quarterback in the National Football League.”

‘I just think that after maybe a lot of hits early in his career.  Lack of success early in the career has maybe led to this. That’s next step for him is to get back to the confidence level, to throw caution to the wind and go back to playing the way you played in college and the way you played in your rookie year.  I think there’s a huge upside for him.”

I think you’re going to see Chip Kelly try to bring Bradford along slowly by stressing the running game early in the season.  Kelly is easy on a quarterback because he’s never going to abandon the running game, like Andy Reid used to do.  This is a great atmosphere for Bradford and you know that’s one of the reasons Mark Sanchez stayed here.  Bradford is either going to make it here or hang it up and retire.

That’s brings us back to Shurmur.  He was Bradford’s offensive coordinator during his rookie year before he lost his confidence and became “Check Down Charlie”.  That phrase describes the quarterback who will only throw the football to underneath receivers.  He won’t put the ball up deep to receivers downfield because he either lacks the arm strength or the confidence.

We know from the comments of Zach Ertz, that Bradford has the strongest arm of any quarterback he’s ever played with and that includes Michael Vick and Andrew Luck.  Obviously this means Bradford’s problems is a lack of confidence in his ability to make plays downfield.  That has to rebuilt or the Bradford experiment could wind up being a failure.

Kurt Warner didn’t cover it up, he called him “Check Down Charlie”, which is another word for a “scared quarterback”.  Bradford is scared about his knee and his ability to make plays downfield.

Another challenge for Bradford is going to be the criticism he’ll need to handle in Philly.  He didn’t hear the type of criticism in St. Louis that he will hear in Philadelphia, if things don’t go well.

The truth of the matter is that the Bradford experiment is both a physical and mental reclamation project. I don’t think the Birds should rush him back to action.  There’s too much hanging on the line.

He needs to step on the field with both a healthy knee and some healthy confidence. They want to get Bradford back to the level he was at when he came into the National Football League in 2010.

The Eagles need to take this thing slow and not try to rush it despite the demands of the fans and the sports media.  They don’t need to roll this guy out there in the preseason until he is definitely ready.  I don’t want to see this thing get ugly.

If the Bradford experiment is ultimately successful, the quarterback, Chip Kelly, Pat Shurmur and the rest of the Eagles will be holding up a Lombardi Trophy, so if it means waiting an extra month or two, that’s fine with me.

Will Ruben Amaro Sell At The Deadline?

Later For 10 Wins, Chip Kelly Knows It’s All About Winning A Super Bowl