I Like What Eagles Center Jason Kelce Had To Say 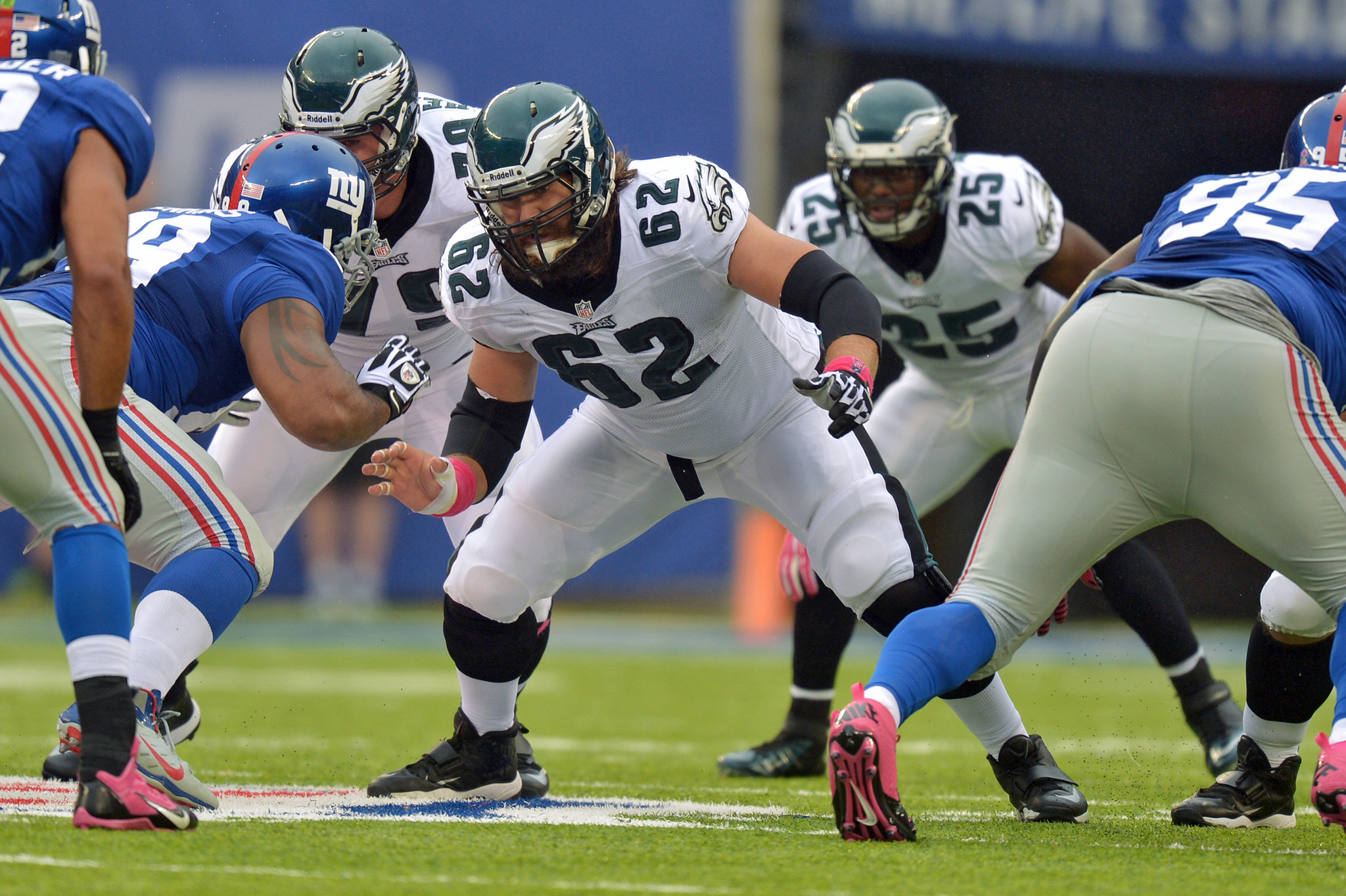 Showed cerebral grasp of the game to go with outstanding physical ability to block bigger defenders straight up or move down the field to crush smaller ones. Probable 2014 scenario: Will continue in starting role.

Beauty is in the eye of the beholder and nobody knows whether the Eagles have gotten better or worse until they play the entire season and playoffs if they make them.  But I like the fact that Eagles Pro Bowl center Jason Kelce believes the team has gotten better.  That’s one of the reasons why he made such a bold statement on Thursday after the team’s OTA workout.

“I’ve said this before and this might piss off a few people, but in all honesty we started off 9-3,” Kelce said. “We started off really, really good and we got lucky quite a few times to win games we probably shouldn’t have been in and I think the fact that we ended the season the way we did, didn’t make the playoffs, in hindsight it’s almost a good thing because it forces the coaches, it forced the organization, to re-evaluate what we had.”

Could you imagine if he would have said he thought they got worse?  He couldn’t say that publicly, even if he believed it.

I don’t have a problem with Kelce saying what he said.  He’s looking at what happened in a positive light and believing this football team has gotten better.  There’s no proof of the team getting better. Kelce is deciding to believe they have gotten better.

The athletic offensive lineman is saying it’s good that the Birds didn’t make the playoffs because it honestly told them that they weren’t good enough and needed to change a large amount of their personnel.

I understand Kelce saying that but we don’t know and he doesn’t know whether the personnel has gotten better or not.  The key to all of this is the quarterback position.  If Sam Bradford goes down in the third game of the season and isn’t able to play another game for the Eagles all season, does that mean that the team has gotten better?

We as onlookers can sit on the side and wonder, Kelce, on the other hand is taking action with his belief system by proclaiming it was a good thing that they didn’t make the playoffs in 2014 because it helped them change personnel to get better for 2015.  As I see it, he’s finding a positive way to look at their circumstance.

Is the offensive line better with just about the same personnel?   They may have to play without Todd Herremans and Evan Mathis?  The Herremans of 2014 won’t be hard to replace, but replacing Mathis won’t be as easy.

Will it take the team a while to get used to playing with each other?  Normally a team that turns over as much of it’s roster as the Birds did, takes a while before it starts winning. In addition, no team has ever built a championship via free agency.  Most of the moves the team has made were free agency moves.  Kelce had an answer for that as well.

Birds Are Stacked At The Inside Linebacker Spot

Peter King Has Eagles At Number 7 in His Power Rankings

and I hope Jason Kelce returns to form as well for he banged up and didn’t really play as well in 2014 as he has in previous Seasons.. He’s missed 25% of his Starts over his 4 Year Career..

Interesting perspective G. I agree with your assessment…what else could he really say, the team got worse? That is not likely.

Kelly shook this team up. From looking at his time in Oregon, he had a number of players with “questionable character”, and he disciplined or removed some when needed, but he did not shy away from talented players who had made mistakes in the past. What Kelly is looking for is players that “buy-in” to the system. They buy-in to the sports science, the up-tempo practice, the smoothies, the sleep monitoring and the coaching philosophy. I believe that this is what Kelly refers to as “culture”, and if you buy-in, and you perform, then you are part of the team….but if you don’t buy-in, regardless of your performance, you will not be on the team. It really is not a character or culture issue….Kelly is going to build his team to be full of players who want to be here and who are committed to doing the program as he has laid it out. In the end Kelly’s job will depend on it, and he knows it, so he is either going to be successful with doing things HIS WAY, or will go down with the ship.