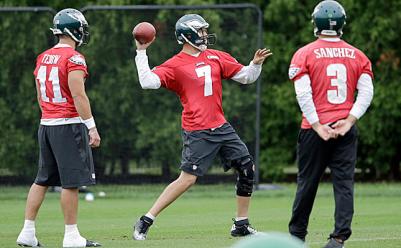 It’s never too early to begin fantasy football preparation, and the stock report for Eagle players is a bit up in the air. Having an Eagles player on your fantasy football team(s) is a home-town bonus, but with all of the off-season roster shake-up, trying to project what positional tiers they fall in is difficult.

The quarterback is going to put up numbers in the Chip Kelly high tempo offense, but the questions surrounding the position battle (Bradford being ready and remaining healthy/limitations of Sanchez), is one that will result in no Eagles quarterback being in drafted in the majority of “non-Philly” area drafts. Bradford is a fantasy football backup with the “unknown” potential, I’d rather spend the draft pick on a high upside rookie over Bradford.

Demarco Murray barring injury will lead the team in all statistical rushing categories. I’ve seen him ranked anywhere in that 8-11 running back range; and I think that is about where he fits. The latest decision by Chip to release Evan Mathis in addition to signing Ryan Matthews and with Sproles also on the roster, 1400 total yards and 9-11 touchdowns is about right for Murray in 2015. I’m still old-school with my theory of taking a running back in the first round, although I understand owners wanting the best wide receiver or tight-end in the pass happy ways of the NFL. Even without the workload he saw in 2014, Murray is still worthy of a late first round selection in all scoring formats.

Ryan Mathews-unless Murray were to miss significant time, Mathews is a borderline flex option. It’s difficult to project more than 10 total touches for Mathews on a weekly basis, although there is the potential for Mathews to contribute kick return points with the Eagles currently giving him reps during OTA’s. Last season owners were frustrated with the inconsistency of how Sproles produced throughout the season, and feel the same will be felt for owners possibly expecting too much out of Mathews. I’d be more inclined to draft a rookie that may start the season sharing the workload but is in a situation to earn additional snaps as the season progresses.

Darren Sproles-Not too sure when and if I’d draft him this year, his role is going to be reduced even more as both Murray and Mathews can catch the football. Sproles will still see some third down looks, contribute on special teams, but he could easily have numerous weeks with less than five total points, and then a week or two where you “wish you would have started him.”

Jordan Matthews-The sophomore is expected to build on a very solid rookie season, placing him as a low end WR 2 territory and in the top 20 of the position group.
Nelson – Agholor-Could follow a similar path that Matthews took last season. I think Agholor will be NFL ready come week 1, but it would take a lot for Chip to start the rookie for the season opener. Agholor is going to see plenty of playing time this season, and should crack the starting line-up by mid-season, finishing as a respectable wide receiver for the fantasy football playoff weeks.

Josh Huff/Riley Cooper/Miles Austin-The only guy I’m looking to possibly draft right before my kicker is Josh Huff, but I’d need to see a reason in the preseason to do so.

Celek/Ertz-If you were to morph these two into one; I’d say you have a top eight tight-end. Ertz had a few productive weeks last year, but because of the importance of blocking; Celek continued to take the necessary snaps for Ertz to be anything more than a plug and play tight-end.

Ertz is once again a “breakout” labeled player for the 2015 season. He worked hard in the off-season to improve his blocking, and this should improve his chances to prove to Chip that he can do more than catch the football. Ertz is outside of my top 12 rankings heading into the season, and a guy that I’m not comfortable committing as my starting tight-end. He is someone I would pair with another late round guy like Owen Daniels (DEN) until one starts to outplay the other.

I typically wait until my last pick for the kicker, but with how some leagues have their scoring settings, kickers are matching running backs on some weeks with total points. After Matthews, Parkey was the most significant rookie on the Eagles roster, a player that was traded for and spared us from another season of the woefulness of one Alex Henery. Parkey will finis top 5 at his position group in 2015.

Lock it in; the Philadelphia Eagles will be in the top 10 in fantasy football this season. By no means do I believe they will collect the number of special team touchdowns like last year; that was a ridiculous stretch especially in the first half of the season. I expect the interception numbers to climb, I do expect the Eagles to be top 8 in both sacks and forced turnovers, and top 3 in total return yards and touchdowns.
Don’t reach for the Eagles defense, someone is going to do just that for a chance to have the Seahawks defense, but every year a few defenses outside the top 12 finish in the top 8 category, so be patient and pay attention to match-ups.

Major Improvements In the Eagles Secondary