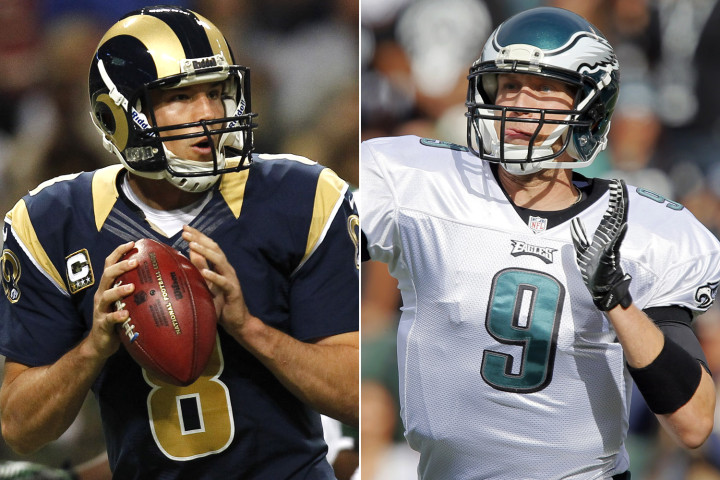 Did you get the chance to checkout the QB Rankings put together by ESPN Insider Mike Sando?  It was a very interesting piece.  Sando did an investigation of different NFL people thought of the different quarterbacks in the NFL.  He talked to front office executives, personnel directors,  general managers, head coaches, offensive coordinators, and defensive coordinators around the league and allowed them to vote about how they ranked the quarterbacks.

Sando and the voters put the quarterbacks in four different categories.

• Tier 1 quarterbacks can carry their teams week after week and contend for championships without as much help.
• Tier 2 QBs are less consistent and need more help, but good enough to figure prominently into a championship equation.
• Tier 3 are quarterbacks who are good enough to start but need lots of support, making it tougher to contend at the highest level.
• Tier 4 is typically reserved for unproven starters or those who might not be expected to last in the lineup all season. Voters used the fifth tier sparingly.

There weren’t a lot of shocks in the rankings.  In the Tier 1 category (quarterbacks can carry their teams week after week and contend for championships without as much help) there were six quarterbacks and  you had the usual suspects.  t-1. Aaron Rodgers and t-1. Tom Brady were in a tie for the best quarterbacks in the league.  3. Andrew Luck, 4. Ben Roethlisberger, 5. Peyton Manning and 6. Drew Brees were also in that Tier 1 group, but I’m not so sure that Manning and Brees are still performing at a level that’s worthy of the Tier 1 level.

The Tier 2 group (quarterbacks who are less consistent and need more help, but good enough to figure prominently into a championship equation) had a total of eight quarterbacks with 7. Phillip Rivers and 8. Russell Wilson leading the way.  Two-time Super Bowl MVP Eli Manning was ranked in the second group.

The Tier 3 group (quarterbacks who are good enough to start but need lots of support, making it tougher to contend at the highest level) had a total of ten quarterbacks with the probable Eagles starter, Sam Bradford ranked 23rd.  Only one of this group of quarterbacks has taken a team to the Super Bowl, T-18 Colin Kaepernick, but he has seen his career head south.   Bradford’s ranking was greatly affected by his injury history, but you still hear about the glowing evaluations from 2010 when he was drafted.

“I thought he was a 2 coming out because I did not see the big arm,” a head coach said. “No one could tell from his pro day because [agent] Tom Condon wouldn’t let him throw any deep comebacks. He has the intangibles, but you have to give him a 3 or 4 just because he is always hurt. Frankly, you probably want him to be your backup, just for his availability.”

“There is no quarterback I loved more than him coming out,” a different head coach said. “I am pulling for him. If he can stay healthy, he can be so accurate. Keep him as a 3 but only because of the injury factor.”

Shouldn’t there be a statute of limitations on glowing evaluations?  If a player doesn’t do anything when they’re healthy, the glowing evaluations need to stop.  I think Bradford has the potential to be an outstanding quarterback, but he’s got to get on the field and do it.

The guy whom Bradford was traded for Nick Foles, was ranked 22nd on the list, just ahead of Bradford.  I think Foles should have been ranked higher because of the fact that he has put together a great season, 27 touchdowns and 2 interceptions.  He had led the Eagles to the playoffs in 2013 and had led them to a 6-2 record last year, even though he wasn’t playing great football.

Shouldn’t a player who has done it on the field in a NFL game, get more credit than somebody who has shown nothing but potential?

Sam Bradford Has A Lot On His Plate, With Sanchez Looking Over His Shoulder

ESPN’s Ron Jaworski On Sam Bradford: Will he be able to look down that gun barrel?

2010 is an eternity in Football and means very little in 2015 and the Future
Bradford has been a Disappointment in his 5 Years in the NFL, plain and simple, Yes Injuries are part of it, but he has done very little in improving his Game, His Team and the Players around him during his 5 Years with the Rams and that’s just an honest assessment that most unbiased people would have on Sam Bradford.. Analyst will say nice things for people like Sam Bradford personally and he’s a nice guy who has had some bad luck, but when it gets right down to it production wise, leadership wise, toughness wise, there is very little upside to Sam Bradford who plays scared, nervous and will fold like a cheap tent as quick as Kevin Kolb did .. It is what it is..
A 1 Year Player for the Eagles is what Bradford is.
Mark Sanchez will be the Opening Day Starter for the 2015 Eagles..

Paul…when you have a golden parachute waiting for you in the college ranks you are playing with house money. You can afford to be wreckless because you have nothing to lose. That’s what we are seeing. Wrecklessness from a guy who has nothing to lose. This will not turn out well. After five years of realizing you can’t win in the pros without a top ten or twelve QB, and having grown impatient to find one, he will be on the college sidelines once again with a big fat contract and nothing lost. We, on the other hand, will be forced to start all over again.

Paul..I know you follow college closer than I do. I would like your opinion. I think Eric Rowe makes a PB safety. As a corner, I see something along the lines of a Sheldon Brown. Good but not great. I think the decision to force the kid out to corner is a bad one because you do not maximize his potential or his impact on the defense. Your thoughts?

I like Eric Rowe’s upside in the NFL as a Safety over CB..
He’s long, rangy and has very good Ball Skills & Instincts. He see’s the Field well and is Aggressive & Physical which plays right into Safety…. He’s a little stiff in the hips and can lose receivers behind him when out at CB from what I have watched from him as he peeks back at the QB often which in the Pros will get you beat as you need to keep up with your Receiver (When in Man to Man)
If Nolan Carroll plays Well and solidifies that other CB spot opposite of Maxwell then I see Rowe getting more and more Reps at Safety and still see Rowe as teh Long-Term Solution at Safety opposite Malcolm Jenkins
I am very unsure how Walter Thurmond will pan out at Safety for he’s much more of a Slot CB in my opinion form his Past… But these Coach’s work and see these Players every day and I am sure will make the proper alignments once they start playing for real..