Eagles Fans With Pats, Belichick, & Harvin Are NFL’s Most Hated 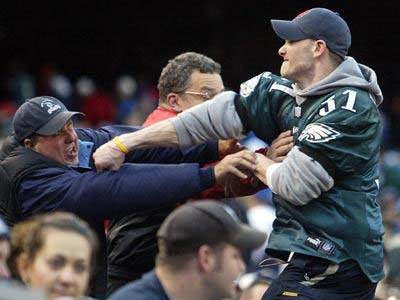 It’s not the first time and it won’t be the last time that fans from throughout the country express their dislike for Eagles fans.  Fans of the Philadelphia Eagles are the most passionate fans of any football team in the NFL.  They take the games seriously and they’re not afraid of telling it like it is, even if that means calling out one of their own players.

We’ve all heard about the Eagles fans booing Santa Claus and the courtroom at Veterans Stadium with a judge making rulings on idiots who go to the game, get drunk and do something stupid things.

Sports Illustrated singled out Eagles fans for being the most hated NFL fans by the rest of the country.

It all started in December 1968, when those disenchanted fans of the Eagles sitting at Franklin Field decided that the best way to unleash their invective was to hurl snowballs at Frank Olivo, a 19-year-old man who stepped onto the field in a Santa Claus suit. The fans were disgusted because the then-lame franchise was winning too much at the end of the season—winning their way right out of the derby for USC’s O.J. Simpson, who went to Buffalo as the first pick in the 1969 draft. Philadelphia took defensive back Leroy Keyes (who?) with the third pick, leaving Joe Greene on the board for the Steelers with the next selection.

In 1998, the team installed a jail in the bowels of Veterans Stadium and hired a judge, the delightfully-named Seamus McCaffery, to preside over the rowdiest of an infamous bunch. And in 1999, several of Cowboys receiver Michael Irvin’s teammates were understandably distressed when they thought Eagles fans were booing the future Hall-of-Famer as he lay on the field with the neck injury that ended his career. In truth, the fans were booing Deion Sanders, but the fact that they cheered as Irvin lay on the field motionless tells you all you need to know. Every fanbase is unfortunately defined by the minority who do stupid stuff like this, but it seems that Eagles fans are more defined than any other group.

The most hated owner is the Redskins Dan Snyder.  Has Snyder ever gotten anything right?  If I were a front office person I would always want to find out which players the Redskins were interested in and decide to always stay away from them.  Nothing has worked in Washington since Snyder has been there.

The most hated player in the locker room is Buffalo Bills wide receiver Percy Harvin, who was run out of Seattle and New York because his teammates hated him.  He had some serious fights with his teammates in Seattle.  At one point he refused to play in a game because he didn’t like the way he was being used.

The most hated player by the fans is Cleveland Browns quarterback Johnny Manziel, who carry himself like a pampered Superstar off the field, but couldn’t play like one on the field.  He’s going into his second season and is still anchored on the bench despite the fact that he was drafted in the first round and the Browns are desperate for decent play at the quarterback position.

Is It True That Chip Kelly Was Married Before?

Is The Criticism of DeMarco Murray Legitimate? – Video