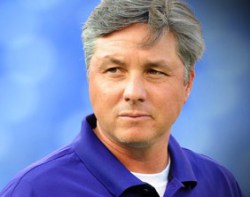 NFL Network reporter and NFL insider Ian Rapoport just reported that Evesham, New Jersey Mayor Randy Brown, who doubles as a special teams assistant coach for the Baltimore Ravens sent a text message to one of the Colts head coach Chuck Pagano  encouraging him to rotate the footballs in their upcoming AFC Championship game against the Patriots.

Brown sent the text after they were eliminated in the post season, and he encouraged the Colts to rotate the balls because he thought some of the footballs in the Ravens-Patriots game might have been a little deflated.

“Coach Brown’s text did not mention the Patriots and did not complain about anything the Patriots did,” Ravens head coach John Harbaugh said in the statement. “The Colts never responded to Randy’s text, and he had no further communications with the Colts on this matter.”

Of course the reason this information is very important is because of the huge controversy surrounding NFL Commissioner Roger Goodell’s four-game suspension of last year’s Super Bowl MVP New England Patriots quarterback Tom Brady.   The NFL and Brady are in Federal Court right now battling about the four-game suspension, which involves the deflation of some footballs in last year’s post season.

The text message which was sent by Brown is the only communication the Ravens organization says they made to the Indianapolis Colts about the footballs used in their playoff loss against the Patriots.  Ravens head coach John Harbaugh and the rest of his staff denied any knowledge that he knew of any deflated footballs being used in their playoff game against the Patriots.

Brown has a close relationship with the Ravens head coach and they worked together when Harbaugh was the Special Teams coach for the Eagles.   Obviously that relationship has continued with Harbaugh in Baltimore.

It Was Sports Science That Sidelined DeMarco Murray On Sunday

No surprise here. NFL front office is in turmoil and looks like complete buffoons. Brady will be exonerated and goddell still won’t get fired for being an incompetent moron. Anyone read that slip? 5 mill for a bunch of papers with no real conclusion. Fire goddell and bring back end zone dances

Dude henski bradwy lied his ass off he knew about the balls shit he asked for it……just give him two games and leave it be…..this has gone on way too long

Nobody told Brady he would be suspended if he didn’t give up his phone the investigator actually said he didn’t need it. Again read the report!!!

Brady will be exonerated

Read the report before u believe what ESPN says…

Matter of fact ESPN and all reporters beginning to side with pats now that the reports out.

Brady will not miss 1 game

It was a sting operation against the pats led by but hurt harbough after belicheck embarrassed him by out coaching him soooo bad. It’s in the report Ravens told colts to complain …

How the hell can you explain that 3 of 4 colts footballs were deflated also and they faced no trial interviews scrutiny ? And pats did ???? Why would the NFL look at half time instead of just before the game???? It’s because they don’t care about game integrity or fairness. All agendas.

Wouldn’t be surprised if jets Ravens or colts owners paid off goddell for this whole operation.

Lmfao I could care less about pats or Brady but love NFL. That’s fine if you wanna have an ignorant opinion go ahead but these are the facts.

Goddell handled ray rice Greg hardy and now this like a darn clown it’s an outrage.

I threw my phone away but it has nothing to do with deflated footballs…..dude really come on

When I get a new phone I throw mine out too. Now if I was friends with extremely high profile people and my wife was Giselle who probably texted me nudes yea I’d trash it for sure and would never give it to my boss.

Yea he just happen to get a new phone when this shit went down…..yea that sounds true……I dont give a shit about goddell but brady is a fucking liar

I dont care if he gets suspended or not but if u think the mofo didnt lie…..then I dont know what to tell u

I heard Donald Trump was thinking about asking Tom Brady to be his VP Candidate as his Running Mate.. Even if it’s part-time while he still plays Football …Trump says whatever makes Tom Happy, he’s Cool with…
I don’t even have to make shit up anymore…