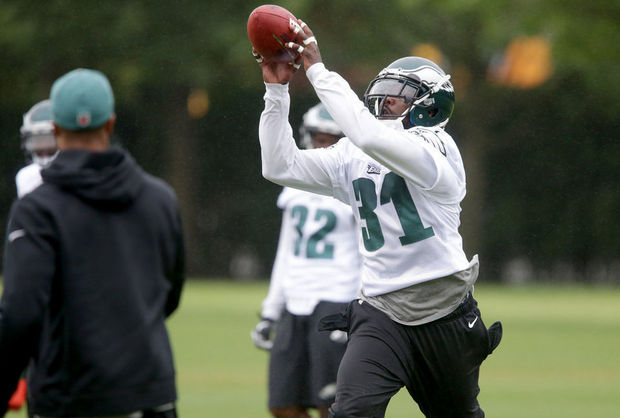 Eagles new cornerback Byron Maxwell and new safety Walter Thurmond have brought over some of the competitive fire that you’ve seen in Seattle the last few years.  It’s a “Get up on that guy and blanket him” type of mentality.

That’s the reason cornerback Maxwell got the $10 million dollars a year deal.  I’m excited about the potential I see.

This off season, I talked to Ken Norton, who is the new defensive coordinator of the Oakland Raiders, about how he is trying to take that competitiveness to Oakland.  Norton was a young, developing linebacker years ago, when I was finishing my career with the Cowboys.  He grew into a Super Bowl Champion and All-Pro linebacker, who knows about how a championship team should practice.

I’m seeing some of that in the defense by the way Maxwell competes and tries to shut down everything the receivers tried to do.  Maxwell made a nice play yesterday on a deep throw by Bradford down the right sideline to Nelson Agholor in the end zone.  Like all of his throws, Bradford let it go with ease.  The throw was on the money and Agholor had a step on Maxwell, but the veteran defensive back got his hand in there at the last split-second to get that football out of there.

Then he got up and showed some of the emotion, you like to see.  You don’t want to show up your teammates at the same time, you have to battle your teammates in order to enhance your team’s level of play. It’s important to Maxwell to win in practice and that’s the kind of attitude you have on the good teams in the league.

I loved the competition and the battling I saw yesterday between the receivers and the defensive backs and linebackers.  Guys were up in the face of the receivers trying to take everything away from him.  The receivers were competing and fighting off the jams.

Zach Ertz and Kiko Alonso exchanged words after Alonso snuck up on Ertz and got a good jam on him when he was playing him man-to-man in the 7-on-7 drill.   This shows me the young man thinks and realizes you have to keep your opponent guessing.  Alonso will be a good matchup with the tight ends in the league.  He can run and he stands about 6’3″.

I had to mess with Najee Goode, who had the chance to make two big plays on interceptions, but he wasn’t able to come down with the football.  On the second play, Goode could have returned it for a touchdown.  It was a pass by Matt Barkley and it was right in his hands.  I like the way he’s breaking on the football.

Sam Bradford Didn’t Have A Stellar Day On Tuesday

This will be Billy Davis’s last year coaching us. How the heck does it take Denver’s 2ndary coach to tell our guys how to be tough and jam receivers? Plus, now he thinks he should of took out fletcher and put in Carrol or Boykin. GET RID OF THE BUM DC!! IMMEDIATELY!!!!!!!

agreed rock. everyone who followed camp last year new carrol outplayed both williams and fletcher. and for davis to not bench one or both of those cinder blocks fletch or williams last year shows how dumb he is and how inflexible he is.

This is why I wantthe Eagles to sign veteran DT Tony McDaniel who was Cut a few Days ago from Seattle for Salary Cap Reasons…
He’s big, nasty, and would made a nice Rotation at NT with Bennie Logan and is inexpensive and would provide some leadership…
Watch the Patriots/Raiders pick him up…