Eagles Must Establish Their Running Game To Protect Sam Bradford 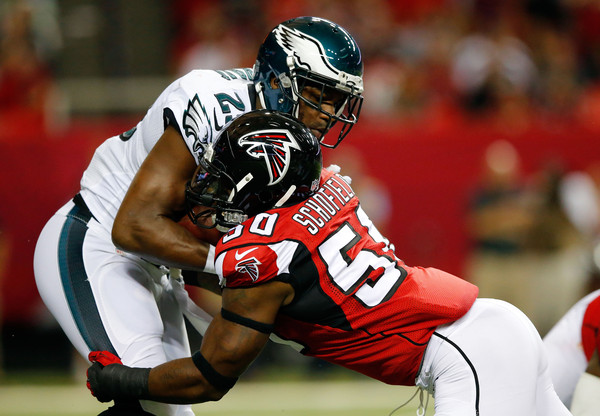 The Eagles offensive line must play better today than they did on Monday night, but there are some troubling issues confronting the guys upfront.  The Eagles offense is a “run first” offense.  If the Eagles can’t run the football,  they aren’t very good at protecting their quarterback.

Sam Bradford got hit far too many times on Monday night.  If he continues to get pounded like that he’s going to get hurt again.

Bradford had x-rays taken of his ankles after the game against Falcons because he got hit so much.  The quarterback doesn’t have a body that will hold up against the pounding, so the Birds need to establish their running game against the Cowboys.  They need to give the Dallas pass rushers something to worry about, so they can’t tee off on Bradford.

The one-dimensional offense the Eagles were playing against the Falcons won’t work.  They were throwing the football on every play in the second half and Bradford was getting hit each time he released the football.

I think Chip Kelly gave up on the running game too soon.  He abandoned the ground attack because the Birds offensive line had some problems with a defensive line stunt in the first half of the Atlanta game.

As expected, the two new guards, Allen Barbre and Andrew Gardner are taking some time to get in sync with Jason Kelce, Jason Peters and Lane Johnson.

The Eagles must be able to run the football today against the Dallas Cowboys.  They’re going to have some growing pains, but they must stay with the running game as they go through this adjustment process with the new guards.

“I don’t know,” Kelce said. “Obviously we’re still trying to build a little bit of chemistry up front with two new guys being in there. We knew what they were going to do before the game; we knew what was going on. They really didn’t play too much differently than we expected them to do. We just got beat.”

“We couldn’t really get much movement on their defensive line,” Chip Kelly said about the Atlanta Falcons game. “They are a one-gap penetrating line, getting up the field, and they did a good job.”

The Dallas defense may come and run some of the same stunts to see if the Birds offensive line can deal with them. This is one of the problems that goes with bringing in new people.  Offensive linemen have to get used to playing with each other.

The Falcons ran a simple stunt and the Birds offensive line wasn’t able to handle it.  Would they have been able to handle it, if Evan Mathis and Todd Herremans were still the guards?  I don’t know but it’s a good question to ask.

Chip Kelly and the Eagles offense had better be able to run the football.  If they can’t run the football, today, they could find themselves, 0-2 and sitting in last place in the NFC East.