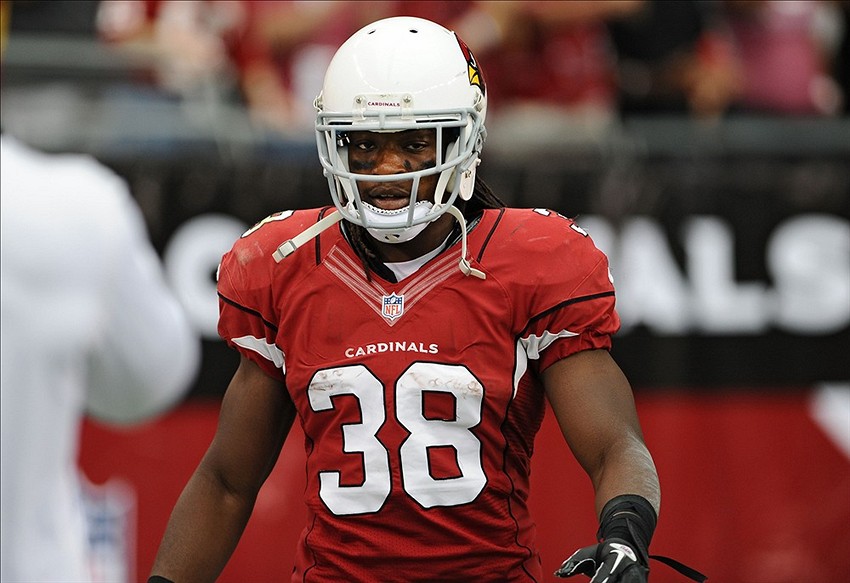 The Philadelphia Eagles have a very weak situation at the running back position.

Injury-prone Ryan Mathews currently sits on top of the depth chart, and even when the former Charger is on the field, he’s a slightly above average back. Darren Sproles is the first guy off of the bench, but his size will always limit the amount of touches he receives. Rookie Wendell Smallwood and Kenjon Barner are currently set to battle it out for the final roster spot or two.

The Birds’ backfield isn’t a great situation, and may not have been addressed adequately enough during free agency and the draft.

The possibility still remains that the club could find a way to upgrade the position before the season begins. Several franchises have crowded backfields, creating an opportunity for the Eagles to work out a trade for a number of veterans that have fallen out of favor elsewhere.

Here are some potential trade targets.

Andre Ellington: Ellington is talented to be a starter in this league. He’s an explosive runner that is effective as both a runner and receiver, but durability has issues have forced him below David Johnson and Chris Johnson on the Arizona depth chart. The Cardinals’ depth at the position extends beyond Ellington, with Stepfan Taylor and Kerwynn Williams also in the fold, making Ellington a prime trade candidate. Even if Arizona isn’t willing to deal him away, either Taylor or Williams would have to be released, and could also be well worth a look on the waiver wire.

Zac Stacy: Just two years ago, Stacy broke into the NFL with over 900 yards and seven touchdowns, serving as the focal point for a terrible St. Louis Rams offense. However, he’s since fallen out of favor with the Rams, and is on the roster bubble with the Jets. Matt Forte’s presence likely means that Stacy won’t be on the roster come September. He’s young enough that he’s worth a look to see if a change of scenery wouldn’t help revive his career.

Knile Davis: Davis is the name that has come up previously as a trade possibility for the Eagles. All of the stars seem to be aligned here. Doug Pederson is familiar with him from their time in Kansas City, meaning Davis should be able to transition easily to the Eagles’ system, and the Chiefs have a loaded backfield with Jamaal Charles, Charcandrick West, and Spencer Ware. Then again, there’s also the possibility that Pederson might not be interested in Davis at all, given that he allowed both West and Ware to go above Davis on the depth chart during last season.

Brandon Bolden: Bolden is an interesting case. He’s played very sparingly for the New England Patriots during his four-year career, though he’s looked effective when called upon. However, with Dion Lewis, LeGarrette Blount, James White, and Donald Brown all vying for touches and roster spots up in Boston, Bolden could be the odd man out. He’s the least established of the players I’ve mentioned here, but a guy a feel is worth checking out nonetheless.

Superstars Have Too Much Power In The NBA

The Eagles can wait until to Camp Time/Waiver Wire list for a Serviceable RB
They should not have to give up OT trade a (Draft Pick) to acquire a complimentary RB as the ones you listed above..
Ellington is more of a Scat Back which the Eagles have 3 of those already on their Roster already in Sproles, Barner & Smallwood
I prefer a more tough-nosed, stay in-between the Tackle, Short-Yardage & Proven Red-Zone RB added to the Eagles…
Knives Davis of KC would be the best of the bunch from your list ..
The Ravens, Giants,Titans, Giants, Bengals, Chiefs all appear to have lots of depth at RB as Summer Camps open..

They should have drafted DeVontae Booker in the 3rd. Watch him have a good year in Denver. Eagles always whiff on talent.

Barner sucks. I know all about Smallwood, he’s from here – He has a chance to be our version of Jamal Charles.

No it’s not Paul, and with no 1st round pick, they still have to address the Offensive Line – Selamalu & Vitai, aren’t going to get it – and the Pass Rush, before the RB position, in a draft where after Fournette, every RB after that is a huge drop off.

Like I said DeVontae Booker should have been drafted this past draft instead of the Back up OG/C.

Thanks paulman!! Same to you and the family!

I don’t think the Eagles are going to do much here…how can they really?

The position is an area of concern, but not great concern. Scrape out a traditional Matthews 8/9 games 900 yards. Spelled with another 500 over the year, with the other two grinding out 400 each and Smallwood seeing more and more time weeks 12-16 with Wentz in there at that point.

Draft another 3rd or 4th round rb next year and move on.

Lions finally Cut/Release Veteran LB Stephen Tulloch today saving them $5.5 Million in Cap Space.. Don’t be surprised if DC Jim Schwartz makes a push for him if he feels the ILB Position with Hicks,Goode & Rookie Draft Pick Joe Walker are Questionable with Injuries or are slow to pick-up his Defense.
Stephen Tulloch is 31 Years old with his best Days Behind him but he can still help some Defenses with his Experience and against the Run, Short-Yardage and Red-Zone Defenses… He’s a Liability in the Passing Game