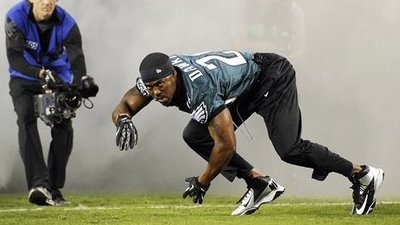 Former Philadelphia Eagles safety Brian Dawkins is introduced onto the field before an NFL football game between the Eagles and the New York Giants, Sunday, Sept. 30, 2012, in Philadelphia. The Eagles retired his No. 20 jersey during a pre-game ceremony. (AP Photo/Michael Perez)

Former Eagles 8-time Pro Bowl safety Brian Dawkins has taken a position in the Birds scouting department. He’ll be out on the road visiting colleges and taking close looks at prospects throughout the country as an Eagles scout.

“It’s either you have an eye or you don’t have an eye”, Dawkins said, “fortunately I’ve been blessed to have an eye for talent.”

I will give Eagles V.P. of Football Operations, Howie Roseman credit for bringing Dawkins aboard.  Roseman has been leaning on the advise of Dawkins for years dating back to 2014.  Remember there had been some bad blood between Dawkins and the Eagles, but the former Eagles safety said he thought it was much more important for him to do what he could do to help this football team than to make a big deal about being shown the door by the Birds.

Dawkins said he started spending more time evaluating players during the latter stages of his career.  He would look at draft picks and make a determination whether that player was going to be able to help them or not.  He continued that practice after his career ended and he took a position with ESPN as a NFL Analyst.  Now he’ll be trying to help the Birds do a great job with the upcoming NFL draft.

The former Eagles safety did say at the end that he won’t be doing any more entrances into Lincoln Financial Field like he did on the day he was put into the Birds Hall of Fame.   There’s a good chance in the near future that he could be making an entrance into the Pro Football Hall of Fame in Canton, Ohio.

Congrats to Brian Dawkins and to the Eagles for finally Hiring him into their Organization… I mnot sure Talent Evaluator is where he’ll spend much time but he’s an Asset to any Department he works for and would be a Great Mentor to Young & Experienced Players alike…
Start him in Scouting/Talent Evaluation and see where it goes .. It would appear that he could be best suited working with the Players as part of the Coaching/Mentoring Staff so maybe he’ll do some of that down the road..I really don’t see Dawkins as a pencil, paper, video watching type of guy for 8-10 Hours a day, but get him in the Building learning everything from the ground up..

And he will be calling GMCliff sometime this week – if he is as smart as he says he is because GMCliff does have that eye for talent that most don’t.

He will be a GM

Good to see some of the arguing and bickering hasn’t changed around these parts. LOLOLOL

Bradford – looks a lot like he did last year minus 1 gorgeous deep bomb to matthews he looks like a pussy, mostly check downs, minimal TDs (less than chase and wentz). im reading his weapons havent been helping him and have been dropping passes again which gets me thinking, our weapons werent dropping balls from foles at this rate and they arent dropping wentz or daniels throws at this rate either and sam had drop issues in st louis… im starting to think its him not them. I Cant stomach more than 4 games with this fucking loser this year!

Chase Daniels – surprisingly has been the best QB of camp, outplayed both QBs and is mixing it up nicely with short, medium and long throws

Wentz – most TDs of the qb group. irresponsibly only really getting 3rd team reps, has had some accuracy issues but protecting the ball, using athleticism well and has a cannon