With The Lane Johnson Trouble, Offensive Line Will Be A Key Tonight 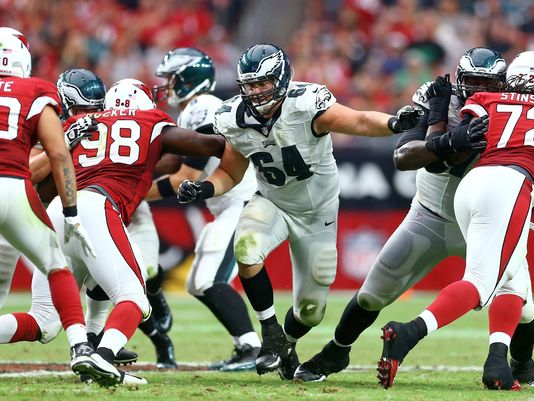 There’a a huge story swirling in the news, as the Eagles begin their preseason tonight with a game against the Tampa Bay Buccaneers.

I don’t know if the Eagles divisional rivals could have come up with a more negative news story than starting right tackle Lane Johnson possibly being suspended for the first 10 games of the season.  He has denied the reports, but it seems like it’s just a matter of time before the story drops on the Birds like a bomb.

Tonight, I want to see the Eagles offensive line establish some dominance upfront by coming off on the snap of the ball and owning the line of scrimmage.  They must win the battles upfront consistently for this team to have any chance of playing above .500 football.

I’ve already talked to you about the problems with an aged Jason Peters at left tackle, now it looks the Birds will have to go battle without Johnson.   Tonight you’re going to have Johnson starting at right tackle and Peters out with a strained quad.  Eagles fans will be more interested in seeing how offensive tackle backups Matt Tobin and Dennis Kelly play.  Can Tobin really hold things down at the left tackle spot and can Kelly do the same thing on the right side or are the Eagles going to be forced to move left guard Allen Barbre outside to the tackle position.

I’ll be anxious to see if the team’s right side can be as effective as their left side with Johnson teamed with big, physical offensive guard Brandon Brooks.  Adding Brooks on the right side gives the Birds a physical presence with his size and power that was needed.

In Chip Kelly’s first year, the Eagles ran almost exclusively on their left side behind Peters, but when the All-Pro went down with an injury a year ago, the Birds started looking to the right side of their line.  The addition of Brooks and the return of a healthy Peters was supposed to give the Eagles the option of running to either side.   If Johnson is indeed suspended it will force Eagles offensive line coach Jeff Stoutland to decide whether to go with Kelly or Tobin at the right tackle position.

I want to see the Birds offensive line get into a groove by getting the running game going.   It’s going to have a lot to do with how this season goes.   Center Jason Kelce needs to get off to a good start after a poor season in 2015.  He’s going to get more help from the guards, but we’re going to see if he can help the big nose guards in the league, despite them outweighing him by 50 to 75 pounds.