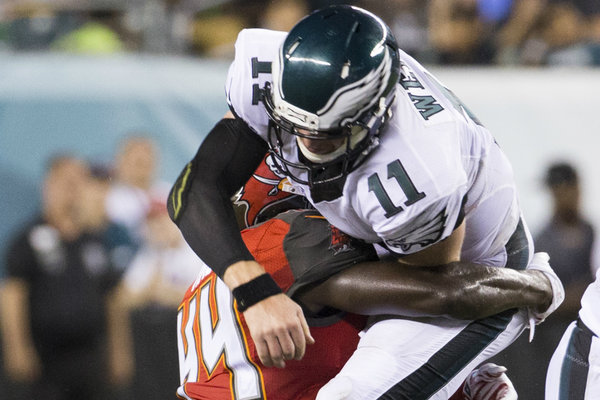 “Carson felt some discomfort and soreness as we began this morning’s practice. We decided to limit him throughout the remainder of practice and, as a precaution, sent him for a CT scan after practice. The scan revealed a hairline fracture in his ribs. We do not know an exact timetable for his return, but we hope to have him back before the end of the preseason.”

Personally, I think Wentz got hurt when he was hit after throwing the ball against a blitz off the corner.  The defender hit him in his ribs and Wentz looked like he had the wind knocked out of him.

I don’t think he will be out for a long time with the hairline fracture and this will serve as a notice to Wentz that he should protect himself and not be so daring when he has the football.   I don’t think he could have done anything on the particular play that he got hit in the ribs, but I don’t want to see him trying to leap over anybody.  Trying to leap over a tackler isn’t a smart move for a NFL quarterback who wants to stay healthy.

Carson Wentz Must Learn To Protect Himself

Damn.. Hopefully it’s a minor hairline and he can be back practicing by 8/22 to give him a few weeks and a couple of Pre-Season Games to play in..

Hopefully Wentz will be smarter when he runs and protects himself better than he did Thursday. This isn’t Nothing Dakota State.

Hair line fractures typically take 2-4 weeks to heal up…no contact can take place for at least 2 weeks. The baseline of the initial scan will then be compared to the healing after two weeks to determine progress. After that..everything depends on the degree of healing and the pain threshold of tolerance by that of the individual with the busted rib.

The good news is that it was reported Wentz was laughing and joking around after the game. He was also spotted at the blink 182 concert Friday night so I’m gleaning from that information that it’s not that bad. However..it has to heal before he gets back into action.

Eagles release WR Deon Long (pman, you can breathe easy now) and G Malcom Bunche. I had hope for Bunche…he looked horrible Thursday against the Bucs though. Pushed back repeatedly and showed little blocking technique.

Some of these players look as if they either have no clue what they’re doing, or they are putting up little to no effort..Reuben Randle is another who fit this category.

GoodNews..; the Guy has been booted/waived by 5 NFL Teams now in the last 2 Years after playing for 4 different Colleges… I know he was just a Camp Body but can’t GM Roseman and the Player Personnel Dept find any better quality WR’s off the Streets than this turd who can’t even follow simple rules ? Who needs this dumb-ass on its Camp Roster.. Go get another OT!!
Eagles have 12 WR’s in Camp, in which about half of them (with NFL Experience) have lousy hands..Their only good Receiver is Hurt..
They could probably get by this Season carrying only 4 WR’s from this Current Corp since outside of Matyhews, the rest of them can’t be counted on . Use the extra Roster Spot or two for a 4th TE and a 10th OL

And he didn’t cause a locker room revolt? Interesting

Well we have probably, learned one thing mr.P.. he has learned from andy, how not to pick good recievers,If you are the type to believe in omens , not a good debut for carson nicked up ribs ,a philly type of subway turnstile for the o line, I see Mr D. developing badly ,with that o line, plus his limited skill set,A fragile, un mobile sam the sham without his pharohs to protect him.Mr wentz get ready to thrown to hostile territory.

Eagles also Released OL Malcolm Bunche who was on Practice Squad last year but must have regressed this Season
Reports have Eagles talking to former Giants OT Will Beatty who was not very good for them during his 3-4 Years there as the NY Giants have since Drafted 3 OL in the last 3 Drafts to sure up their OL since Beatty wasn’t improving
I always that maybe he would be better at Guad than OT .. The Giants had him at and then at LT where he was a disaster