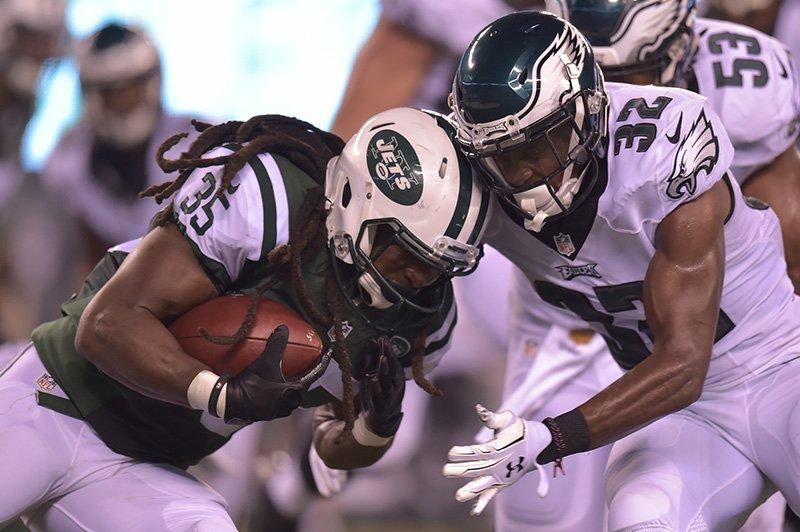 Howie Roseman continues to be very active on the trade front for the Philadelphia Eagles.

On Tuesday afternoon, Roseman rid the team of another of Chip Kelly’s major acquisitions from a year ago, sending former second-round pick Eric Rowe to the New England Patriots in exchange for offensive lineman Josh Kline and a 2018 fourth-round pick that could potentially become a third rounder based on Rowe’s performance.

Kline made 13 starts for the Patriots last season, bringing some additional experience and depth to the group. Early reports indicate that the Eagles are already working on a separate trade to flip Kline for something else.

Rowe had clearly fallen out of favor with the team. New defensive coordinator Jim Schwartz didn’t seem to have much time or patience with his inconsistencies, and banished him to the bottom of the depth chart early in training camp.

Rowe didn’t have the natural instincts to be a cornerback. While some would argue that the team should have given him a shot at safety, the reality is that there still wouldn’t have been much of a role for him with Malcolm Jenkins and Rodney McLeod anchoring the backend of the defense, and Jaylen Watkins looking impressive throughout the preseason.

With a fourth-rounder that could potentially become a third, the Birds were able to obtain some decent value for a guy that they didn’t want on the team.

Just an aside, Chip Kelly is probably going to go down as one of the worst GM’s in the history of professional sports. In the wake his disaster season with full control, the Eagles have now rid themselves of almost all of his significant acquisitions from a year ago.

Good Riddance…..Rowe was a guy who was face guarding Wideouts on the Jets that were cut the next Day. This has the opportunity to be a 3 if that bum gets on the field up there. I am wondering what Madness Howie has in store for the soon to be traded Kline…..more picks or something Juicy?

Bill Parcells said, ” You are what your record says you are” —
GM Howie is collecting a lot of atta boy pats on the back for removing players associated with Chip Kelly. Lets see how he compares to the The Chipper. The Chipper was (10-6 1st place in 2013, 10-6 second place in 2014, and 7-9 and second place in the division in 2015)

If you are comparing Chip and Howie as GMs based on win loss record, then Howie has already won.

Chip was 10-6 for two years with players that were brought to the Eagles by Reid/Howie. Chip was 7-9 with his own players.

I hold Howie 50% responsible for last season. Howie and Tom Gamble both acted like children and were either fired or suspended a couple weeks before the official beginning of Free Agency and Draft. The 2 highest senior personnel men removed at the most important team building time. I don’t hold Chip responsible. It was like throwing Brian Mitchell in at QB because the 1st and 2nd team QB were both knocked out in Gamble and Roseman.

Well you are the only person who doesn’t hold Chip responsible for last years free agent signings, and draft picks. The rest of the football world, and most importantly the guy who fired him, hold Chip directly responsible.

Also, Tom Gamble was fired December 31, 2014 – just days after the season ended. Chip Kelly was given full power over player personnel (GM) on January 2, 2015…. That’s more than two months before free agency on March 10, 2015, and nearly four months before the draft.

I stated prior to the 2015 draft that I did not like Eric Rowe. There was nothing about him that said he was a cornerback. I watched him at Utah and nothing stood out.
Just another wasted pick. Hopefully on the road to recovery.

It truly is amazing how many of Chips players are now off the team. It’s actually very disturbing. Anyways, sounds like Howie is going to ship off Kline. Doesn’t make sense to have another OG on the roster. Would be nice to get a CB or a LB

Kline getting moved for a LB hopefully

I’m hoping it’s to the Panthers and who have some good LB’s who are Back-ups in both AJ Klein and David Mayo who could provide the Eagles with some Depth and Versatility at LB..
The Panthers are a little thin at Guard with Injury to Scott Norwell
The 49ers are also thin along the Guard Position and have some depth at LB Position (Eli Harold, Aaron Lynch & Michael Wilhoite)

Just goes to show that a man or woman can be misjudged very wrongly and very quickly, Usually the harshest judge we all have to deal with is the stern judge who resides inside of all of us.

I believe that many on here, radio etc (myself included) are understating the impact the qb change will have on the WR. Under Bradford YPA are historically low, he dinks and dunks… It’s a fact. Wentz is more dynamic and will air it out. The eagles have a lot invested in WR… DGB was a 2 that could have been 1, Matthews a 2 and Aguilar a 1…. This change will help him the most…

Cigar I was thinking the samething. I’m sure Wentz will have his hiccups but the field was not stretched out at all with Bradford. Wentz will be able to make all the tough throws. Not with ease but he will have the strength to do it. I’m excited. I went from planning my Sunday’s out to compensate for the lack of interest to telling my wife not to plan nothing on days the Eagles play. I don’t care if they go 6-10 I’m anxious to see what our future is with Wentz.

Hey guys, I draft tonight and this is my most important one because it is people from work !!!! I believe Lacy will have a great year like two years ago and i can get him 2 or 3rd round. Gore and Jennings always get overlooked but average almost 10 points a game. If Anderson, Hyde, or Langford is available in 4-6 rounds, who would you pick????

Starks is getting at least 40% of the packs rb touches bro. Go shady over lacy!

Anderson, their line is going to be solid

Thanks, mhenski Lacy and Shady are roughly same but contract year might give Lacy edge

Langford and he will catch a lot of passes too..

Shady a 3 down back lacy not.

Anyone know why josh kline was waived instead of being part of Eagles deal?Mr B is a shady as they come. Guess he figured something out ha didnt like in the trade.

so is Eric Rowe on the Eagles ?

Howie said we just want the pick we don’t want Kline so he was removed from the deal with only the pick being transferred. Apparently Howie was givin a few hours to try and flip him but it didn’t work so they removed him. I got a sense Howie trying to do something bigger…

Maybe but Belickik is sly as the proverbial fox watching the hen house.the philly papers always have their own opinion, And then you read the other guys reason and say Wait that,s not what i I read in philly.