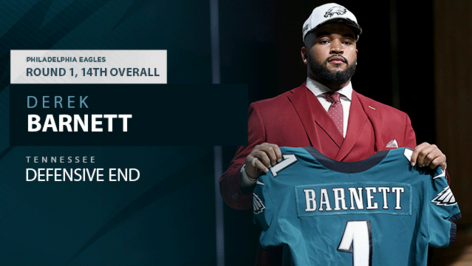 With the first round of the 2017 NFL Draft in the books, let’s take a look at some of the best and works picks from the top of the board.

No surprise here, Garrett was expected to be the pick all along.

This is why its important not to win meaningless games for pride in garbage time at the end of the season. The Bears finished with a win over the San Francisco 49ers late in the season, and it ended up placing them third in the draft standings. The 49ers had the last laugh, forcing the Bears to pay a nice ransom of two third rounders and a fourth to move up one spot. But even more puzzling is why the Bears did this after investing in Mike Glennon during free agency. They’ve hindered Glennon’s ability to succeed by investing the third overall pick in a player that won’t help him, and they lost third and fourth rounders this year that could have helped as well. This is why bad teams in the NFL stay bad teams.

The 49ers got their guy, and fleeced the Bears in the process. Good things happen to a team when Chip Kelly leaves an organization.

I think the mentality of “Don’t take a running back in the first round” has always been silly. I have no issue with this pick. The problem, however, remains that the Jags don’t have an offensive line to block for him.

The first big reach of the draft. Davis is a good talent, but not worth the fifth overall pick. Injury history, and issues with drops and concentration. I wasn’t much of a fan.

Talented wide receiver, but also debatable about whether or not he was worth the seventh overall pick. But once Tennessee reached on Davis, it made it less possible for the Chargers to trade down and get their guy, so they stuck to their board and took the guy they wanted. Can’t fault them for that.

I don’t understand the rise of McCaffrey. I just don’t think he’s built to survive the pounding he’ll take in the NFL. At the end of the first round, he might have made sense for some team. But I project him as a glorified third-down back, and taking him eighth overall was just silly.

Another major reach. Ross deserved to go at the end of the first round, and shouldn’t have even sniffed the top 10. The Bengals also had much bigger needs, I can’t get on board with this pick at all.

I’d hate this move if I were a Chiefs fan. This is the classic Andy Reid trying to outsmart the rest of the league kind of trade. Yes, he finally gets his long-term answer at the position to develop behind Alex Smith. But Smith is still going to be the guy for at least a year, possibly two. The Chiefs are built to win now, and trading up for a guy that won’t see the field for multiple years and sacrificing next year’s first-rounder in the process really undermines the team’s ability to improve and contend in the short-term. If the Chiefs waited, they’d have better prospects available next year or could have gotten a comparable developmental guy in a later round.

Can’t disagree with this pick at all. Saints stood pat, and got one of the best corners in the draft.

Houston gets their next quarterback. How long until Bill O’Brien benches him?

Solid addition to a solid defense.

Ravens stood pat and came away with a very good corner.

Redskins get a very talented piece for their defense, albeit with questions about whether or not he can stay healthy.

The run on corners really started to pick up at this point.  I’d worry about Jackson’s size.

The Eagles are lucky Howard didn’t fall to the Giants.

A 25-year old offensive lineman in the second half of the first round. Brings back wonderful memories of a 26-year old fireman who was a man among boys.

The Lions add a quality young linebacker to their mix to stay in contention in the NFC North.

The Eagles were heavily linked to Harris, and I’m thrilled he didn’t come to Philadelphia. He won’t be a full-time player to start his career.

The Giants offense gets another talented piece. The real question now is how much Eli Manning has left.

Great value for the Raiders assuming he’s cleared of all alleged charges against him.

The Browns may have gotten a big steal at the end of the round. They keep passing on quarterbacks, but I can’t argue with the trades they’ve made.

Dan Quinn gets another young piece for his improving defense.

After fleecing Andy Reid for a nice bounty of picks, Sean McDermott begins his rebuild of the Bills by injecting a top corner prospect into the secondary.

To the surprise of everyone, the Cowboys didn’t draft a top prospect with a looming suspension.

This is the one move Cleveland made I wasn’t on board with. Just not a big fan of spending top picks on tight ends. Would have added Rueben Foster at this point to go with Garrett and Peppers to give the Cleveland defense a ton elite talent.

He’ll have a chance to learn from James Harrison.

I love the move by the 49ers to trade back in to the first round and pick up a guy that had top-10 talent. Foster’s fall was pretty surprising.

The Saints turned Brandin Cooks into an offensive lineman.

Thoughts On The Derek Barnett Pick

Some other Highlights and Selections be Positions

TE’s and LB’s Positions went higher than usual while the WR and OL Positions were less than normal..

Jonathon Reed went 17th & Ruben Foster went #31st as they fell down the Draft Board. OT Cam Robinson and OLB Tim Williams were not selected at all in the First Round
CB Marlon Humprey was the only one who went as expected and he was Projected to be a Md-1st Round and went #16th..

Mixon to the bengals…. that works too freaking funny!

Hill to the Eagles?

Not a bad idea gloomy hill for Kendrick

Gloomy more like Bernard for Kendricks, Mixon/Hill is speed power, they’ll keep that and look at moving Bernard.